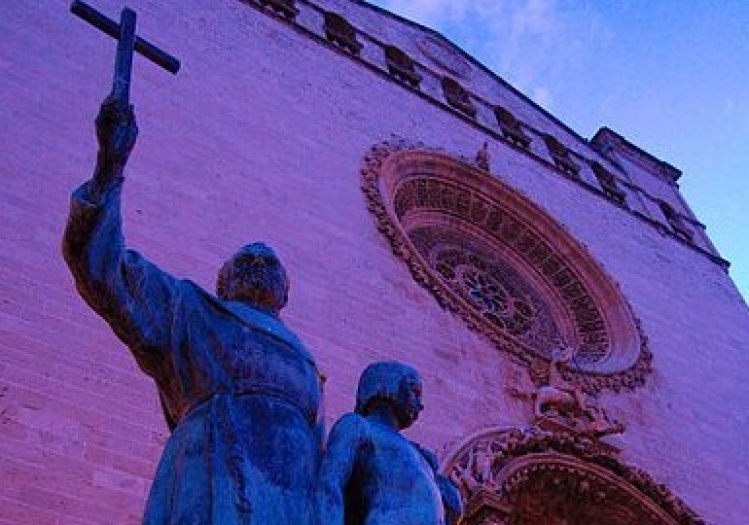 To mark the three-hundredth anniversary of the birth of Padre Junípero Serra (1713–84), Stephen W. Hackel and Gregory Orfalea have each written critical biographies of the pioneering California missionary. Hackel concludes his scholarly study, published in 2013, by stating that his book will not be the final word on the controversial explorer: “Serra studies will continue to evolve as successive generations examine his life anew.” Almost as if on cue, Orfalea responds in his book, published this year, that his and Hackel’s Serras, “though similar at times, are essentially different, and our approach is vastly different.” Here, then, is a tale of two Serras.

Both biographers closely follow the dramatic adventures of the peripatetic Spanish friar (proclaimed blessed by Pope John Paul II in 1988)—and Serra had many such adventures on both land and sea. The first half of his life was spent entirely on the island of Mallorca, off Spain’s southeastern coast. Born to a poor farming family, Serra entered the Franciscans at sixteen, was ordained, and became a prominent professor of theology. But at his career’s midpoint Serra embarked on a totally new venture, as a missionary to colonial New Spain. Finally, in 1769, he undertook what would become his crowning achievement as president and “Founding Father” of the Alta California Missions.

Both Hackel and Orfalea raise challenging questions about Serra’s worldview, his motivations and legacy, and more generally about the Catholic missionary endeavor in the New World. But the gulf between the two authors quickly becomes apparent and is as wide as the Sea of Cortés. Hackel is a kind of modern-day devil’s advocate, and his sobering perspective on Serra will dispel any pious notions that the Spanish friar was without blemish. Orfalea, while never playing down Serra’s shortcomings and cultural blind spots, underscores his idealism and steadfastness under the most challenging of circumstances. Hackel questions Serra’s interest in the California Indians’ understanding of their own world; Orfalea argues that Serra was the quintessential hands-on Catholic missionary, spending himself “to put on Christ Jesus” for the sake of others.

Hackel, a highly respected academic, has written widely about the indigenous California tribes and the catastrophic effect the early Spanish and later American incursions had on them. A previous book-length study on the Indians of the Monterey region (Children of Coyote, Missionaries of Saint Francis [2005]) treated the demise of several tribes. But here he focuses his justified anger at what befell the California tribes on one man. Serra becomes not only the agent responsible for imposing a self-negating, medieval Catholicism on an otherwise content, self-sufficient people, but also the architect of a mission-enclosure system that led thousands of unsuspecting natives to die from communicable diseases introduced by the Spaniards.

In Hackel’s telling, Serra was “insular” in almost every respect: his place of birth, upbringing, religion, clerical training, spirituality, and academic discipline. He was a medievalist who, Hackel claims, continued to hold to a pre-Copernican cosmology. Furthermore, Spain was still patrolled at the time by the nefarious Inquisition, with its anti-Jewish, anti-Protestant, and anti-Moorish mindset. As a theologian, Serra held assignments with the Inquisition, both in Mallorca and New Spain. On top of all this, the Spanish Franciscan spirituality of that time emphasized the physical sufferings and death of Christ as a means of understanding and emulating God’s self-emptying love for creation. This spirituality is Greek to Hackel. One of his book’s serious flaws is a lack of appreciation for eighteenth-century Spanish Catholicism and Franciscan spirituality. Here Orfelea does a much better job, making insightful use of two early Franciscans key to Serra: St. Bonaventure (1221–74) and John Duns Scotus (1235–1308). Orfelea details how their approaches bolstered not only Serra’s tolerance for others as a missionary, but also his relative independence as a thinker. Serra had his own run-in with the Inquisition (a fact Hackel fails to mention). Further, his record of association with the Inquisition turns out to be limited and mostly inconsequential—with the exception of one troubling incident.

As Hackel recounts it, Serra played an investigative role in the case of an innocent woman who was accused of witchcraft and ended up dying in custody. The events in question took place in 1766, while Serra was working in a mission region northeast of Mexico City. A local woman, María Pasquala de Nava, was accused of making a pact with the devil, performing voodoo-like rituals, and showing irreverence toward the Eucharist (among other things). Serra conducted several lengthy interviews with her, during which she gave him a near-total confession. However, as an investigator rather than a judge, he did not issue a verdict in the case. Instead, he remanded the woman to Inquisition headquarters in Mexico City. There, after five months in prison, she was tried and convicted. Late the same night, she was found mortally wounded in her cell. She died the following day. Serra was elsewhere in Mexico at the time. Still, Hackel concludes that “as an agent of the Inquisition,” Serra played a major role in her death.

From the record Hackel provides, however, such a conclusion doesn’t seem warranted. Rather, the textual evidence simply demonstrates that Serra was an able detective who, in this case, got a confession. More telling are Hackel’s pointed asides. “Serra was an unrelenting interrogator,” “as inquisitorial as he was evangelical,” who “would have been especially wary of María Pasquala simply because she was a woman and a widow.” Furthermore, “María Pasquala’s mixed racial background also raised Serra’s suspicions.” Such innuendo is not substantiated by Hackel and is unworthy of a scholar of his stature. More disconcerting still is his apparent lack of interest in determining how Pasquala died. Instead of pursuing this aspect of the tragedy—which Serra clearly played no part in—Hackel seems content to discredit Serra by mere association.

As for Serra’s understanding of, and tolerance for, natives and their ways, Serra often told his superiors that the Indians impressed him as better Christians than the Spaniards were. Still, both authors find repulsive Serra’s self-flagellations—he actually beat himself bloody in a pulpit in New Spain while conducting a Lenten “revival.” Serra also walked thousands of miles across much of Mexico and Baja and Alta California on an ulcerated and excruciatingly painful leg. Hackel remarks that such self-inflicted and prolonged suffering (Serra refused treatment for his leg) was “perhaps the only kind of pleasure a Franciscan like [Serra] was allowed to know.” This is nonsense. As Orfalea casually observes, Serra seems to have had a healthy affection for both snuff and chocolate. Nor does Hackel’s emphasis on self-abnegation and rigidity square with many of Serra’s diary entries and letters (see Maynard J. Geiger’s The Life and Times of Fray Junípero Serra, O.F.M. [1959], which Hackel describes as “magisterial”). There Serra delights in the peoples, landscapes, flora, and fauna he discovered in the New World, and reveals great personal warmth for his fellow friars.

In Converting California: Indians and Franciscans in the Missions (2004), James A. Sandos noted that the missions Serra worked to establish in Alta California—he founded the first nine himself; there would eventually be twenty-one—sought to become self-contained economic units that permitted “the instruction, baptism, development, and maintenance of the religious life of the Indian neophyte.” For Hackel, such settlements were inherently repressive and dystopian. For Orfalea, they represent Serra’s communitarian impulse—one that nevertheless proved problematic. In seeking to protect the neophytes, the enclosure system unwittingly exposed them to a variety of fatal diseases. Hackel argues convincingly that, in compelling the natives to work at subsistence levels, adhere to Catholic liturgical practices and sexual mores, and submit to beatings if they broke the rules, Serra (who may not have administered corporal punishment himself, but allowed it) was partly responsible for grave injustices. As the late Franciscan historian Francis Guest noted, the beatings were “a form of degradation that violated human dignity.”

While deplorable, these practices nevertheless pale in comparison with the violent crimes and murders inflicted by some of the Spanish soldiers and settlers during Serra’s tenure. (The Indians responded by attacking several of the missions, burning and killing as they went. Serra pleaded for leniency for these renegades; the viceroy granted his request.) Hackel and Orfalea agree that Serra was a strong defender of the Indians and an unrelenting, sometimes caustic critic of the Spanish civil and military authorities. Yet deaths resulting from individual crimes were nothing compared to the diseases unleashed on the unsuspecting native peoples, both by the Spanish and later the American conquests.

In sum, Hackel’s book offers a broad criticism of Serra and of the Catholic missionary endeavor in New Spain and Latin America in general. He concludes that Serra was a “colonial imperialist” who misunderstood the Indians and saw the natives as “pitiful people, to be converted or removed.” Removed? That is clearly too harsh a judgment. Here, perhaps, Orfelea’s telling is the more balanced of the two, although his book is occasionally marred by sloppy editing and takes unnecessary liberties in reconstructing Serra’s thoughts and feelings, and sometimes seems overly impressionistic. Still, Orfalea provides texture, verve, and a sense of place, and this is where Hackel falls short. Like Hackel, Orfalea traveled widely to retrace Serra’s steps, and even unearthed several primary texts. A short-story author who has also edited a collection of Arab-American poets, Orfelea deftly uses literature, art, music, and architecture to explain Serra’s interests and achievements. Like Hackel, he does not skirt substantive criticisms of Serra and his project, yet he often puts them in a broader, more reader-friendly context. His discussion of the Spanish Inquisition and Serra’s involvement with it, for example, is not only thorough but more succinct and dispassionate than Hackel’s politically correct approach. But both authors write admiringly of Serra’s faith, the clarity of “his logical, focused mind” (Hackel), his indomitable will, and his physical endurance.

California has changed dramatically since Serra’s time. In faulting the Catholic parochialism of the early missionaries, Hackel sees much to emulate in modern California as “a dynamic region, defined today by its diversity and integration into the global economy that transcends national boundaries.” No one would deny that. But another paradox persists. The individualism and materialism Hackel applauds played a grave role in the destruction of the peoples he values. And as James A. Sandos noted a decade ago, the greatest decline in those native populations occurred fifty years after Serra’s death, and decades after the missions themselves had been disbanded. In the twelve short years after California became a U.S. territory (1848), the indigenous population fell a staggering 80 percent. Thus, Sandos concluded, the Franciscans’ “partial success” of sequestering the natives in mission enclaves looks better than the fate of California’s “nonmissionized Indians.”