Going to Mass in China
By Liam Callanan
The Last Word 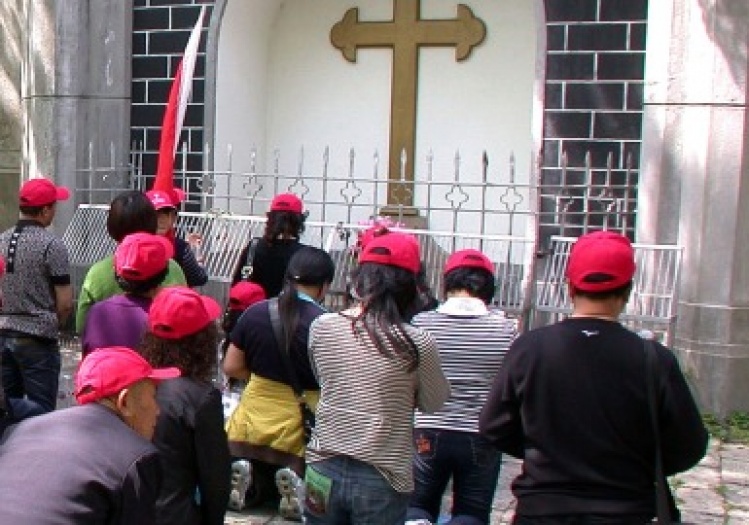 It’s late Saturday night in Shanghai. I’m in town for thirty-six hours as part of a whirlwind tour of China. A friend of a friend connected me to my tour guide, the briefcase-bearing David, a university student who plays right tackle for his school’s American-style football team. He’s earnest and his English is fine, but he has seemed utterly mystified by my questions. What should I see first? Exactly what part of the city are we in? Now, over drinks, the truth comes out: He’s never been a tour guide before; he’s doing this as a favor. He smiles weakly.

His friend Alice, the best discovery of the day so far, all opinions and eye-rolling, suddenly interrupts to ask, “Are you religious?”

As was the case with most of the crowded streets we wandered today, I’m unsure where this will lead, but it turns out to be a practical matter. The next day is Sunday, and they have heard Americans like church.

So I confess. Yes, I am religious—Catholic. That doesn’t register, so smartphones are consulted, translation occurs, nodding ensues: Catholic. I’d consulted my own phone earlier to research Mass times, but when I searched the web for “Catholic, Shanghai,” the first thing that came up was a London Telegraph article, “Shanghai’s Catholic Church in Disarray.” I learned that longtime Shanghai bishop Aloysius Jin Luxian died in April, and his apparent successor, newly minted auxiliary bishop Thaddeus Ma Daqin, has been under house arrest since his episcopal ordination. Ma had used that high-profile occasion to renounce the Chinese Patriotic Catholic Association, the entirely state-controlled version of the Catholic Church in China.

Bishop Jin, on the other hand, had worked with the Patriotic Association for many years. It was a pragmatic decision—he’d spent eighteen years in prison and reform camps. But since his release, with the Communist Party’s—I’ll just use the word—blessing, Jin had grown the diocese to one hundred forty parishes, including the one I was planning on going to the next morning, the oldest Catholic Church in Shanghai, St. Francis Xavier, founded in 1853 by Spanish Jesuits.

I tell David and Alice that I am a bit nervous about going, given what I’d read. Disarray? House arrest? Reform camps? Alice is confused, so I Google up the Telegraph article on my phone and hand it to her. (Actually, I used the Chinese search engine Baidu. Google has refused to censor its searches in China, and so that website often timed out, or routed—after a delay of several seconds during which you could almost hear a Chinese censor whistling and drumming his fingers—to a Google server in Hong Kong. And when I tried to research St. Francis Xavier parish using Bing, I was greeted with a note: “Due to legal obligations imposed by Chinese laws and regulations, we have removed specific results for these search terms.”)

Alice is sure the article is untrue. She is entering a social sciences PhD program at an Ivy League university in the fall, to study, she says, what makes Japanese people so inherently evil. I ask if she really believes that. Alice asks if the Telegraph is a reputable paper. Editorially conservative, I say, but yes, of the London papers—

The next day I took a cab to St. Francis Xavier, or Dongjiadu, a beautiful and spare white copy of the Chiesa del Gesù, the Jesuits’ mother church in Rome. I’d read about China’s parallel Catholic churches—the “underground church” of believers and clergy who refuse to have anything to do with the Patriotic Association; the “open church” of those who cooperate. It’s simple, and not. Some bishops are on good terms with both Rome and Beijing. St. Francis gave no outward sign of its allegiance. The chauffeurs and beggars lingering outside were just chauffeurs and beggars, right, not surveillance? (I played it safe and paid the beggars.)

Inside, only a hundred or so filled the pews, but they seemed to represent every continent. The Mass was in English. The priest was Chinese. The sound system was balky. Every now and then, a man marched up a side aisle and waved his arm. Maybe he was an usher. Maybe he was something else. Speak more softly, he seemed to say, or, Stop.

No one, least of all the priest, paid him any attention.