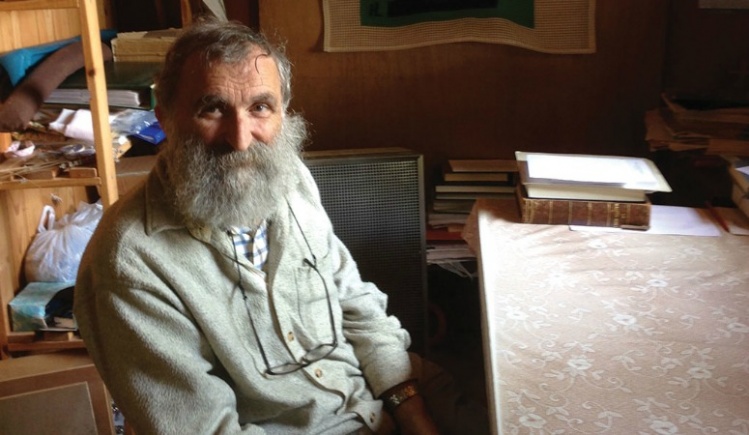 “When one tries to speak lovingly of God, all human words become like the tears of blind lions seeking sources in the desert.”

Not long ago I discovered the work of Daniel Bourguet, a Lutheran minister who lives as a hermit in the south of France. The first books of his I read were adapted from retreats he had given during Lent and Passiontide. Bourguet’s pious style might put some people off—it is a style better suited to oral presentation than to the page—but if one can look past it to the substance of his reflections, one will find some remarkable insights. I was so impressed by his work that I translated one of his books into English and naïvely set out to find a publisher. I never found one. I shared my translation with several friends, hoping for some encouragement and also wanting to share what I thought was a gold mine. Nobody seemed particularly impressed. What I found to be quite moving was considered too mystical or sentimental.

In retrospect, I think the problem may have been Bouguet’s strange insistence that God has “sentiments,” that he feels our pain and rejoices when we turn toward him. Many of us consider this way of talking about God to be childish. Yet in the Bible God reveals himself as having very human emotions—even some that are not very pretty, like anger and jealousy. God is described as changing his mind and repenting of evils he has allowed. In the creation narrative, we are told that God made man in his image and likeness. This means that we are in some way like God, but it also means that God is in some way like us. This is the basic relationship on which revelation and, ultimately, the Incarnation are based. Theology tells us that all our discourse about God is analogical. God speaks to us about himself truly, but in a language we can understand. The divine reality exceeds that language: it is unimaginable, unspeakable. The challenge is to acknowledge the similarity between us and God without forgetting the radical dissimilarity. We are always in danger of drifting toward either anthropomorphism or agnosticism. I worry that the tendency within Christianity today is toward a kind of agnosticism, in which God is relegated to some unknowable sphere and religion is reduced to a kind of moralism—to actions rather than words.

This is understandable, since the culture at large has become more and more agnostic. More and more people are describing themselves as “none of the above” in surveys of religious affiliation. “Spirituality” is in, and dogma is out. We are part of that larger culture and we need to engage with it, to accept what is authentic in its insights. No doubt there was an overemphasis on dogma in the past, and so now there is a reaction against it. On another level, there has also been a reaction against a very sentimental and basically egoistical type of piety, which neglected the social imperatives of our faith.

Still, I think we should be careful about overcompensating. There is another point of view that we are in danger of forgetting—God’s own point of view. We can grasp something of that point of view by what God tells us about himself in the scriptures, but also by what he leaves to our imagination. There is, for example, the perennial problem of suffering in God. Theological wisdom tells us that God is impassible, almighty, perfectly happy. But we cannot really imagine an indifferent and impassive and happy God serenely watching his creatures destroy themselves. The whole mystery of the Incarnation says something entirely different. One of the themes Bourguet develops is that of the apparent silence of the Father during the Passion of the Son. The Father sends his Son a comforting angel during his crisis in the garden of Gethsemane. And there is the mysterious apparition of Simon of Cyrene, who is identified as the father of Alexander and Rufus. In fact, Simon is the only Biblical personage who is identified not by his father but by his sons. We are to think of him, then, as a father, and perhaps as a figure of the Father of Jesus, helping him bear his cross. Again, we see the Father expressing his immense sorrow in the tearing apart of the curtain of the Holy of Holies; it is as if he were tearing his vestments in grief. From these discreet signs, we can sense something of a silent suffering too great for words.

Can we speak of God’s happiness, his beatitude, as something actually “happening” in God, despite the fact that, according to classical theology, he is beyond all change? Can we not see the human reactions of Jesus as reflecting the sentiments of God? “He who sees me, has seen the Father.” Have we become too sophisticated to believe that we can make God happy or sad, to take scripture at its word—at God’s word—when it tells us that the Lord delights in and rejoices over us (Zepheniah 3:17)? One of the best sermons I ever heard was on why we should pray. The preacher’s answer: because God likes us to pray to him. End of sermon.

A God Who Trembles