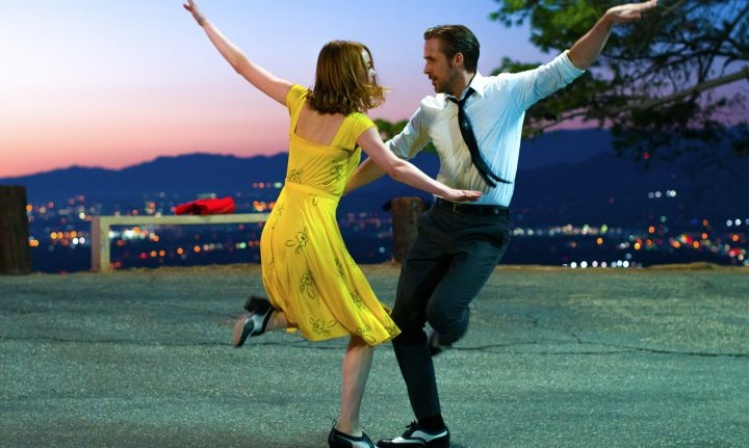 La La Land presents itself as a bold atavism, both paying tribute to, and reviving, the glittery, glamoury musicals of the 1940s. The film hits the ground dancing with its bravura opening sequence, in which the familiar tedium of a Southern California traffic jam morphs into something altogether else, when a character stuck in one car begins unexpectedly to sing. Soon hundreds pile forth from their vehicles, all belting out a rousing show tune called “Another Day of Sun!” With chorus members skateboarding, cross-biking, vaulting, and somersaulting onto car roofs, the ensemble turns an LA overpass into a riotous swirl of dance geometries that would have made Busby Berkeley proud.

The romance in La La Land is the familiar one of thwarted youthful ambition seeking solace in mutual encouragement and shared good looks. Emma Stone (memorable as the recovering addict in Birdman) plays a would-be actress working at a Starbucks on the Warner Bros. studio lot; surrounded by the settings of screen glory, and glimpsing the occasional star, she’s reminded daily both of the fame she aspires to and the humiliating distance that separates her from it. Ryan Gosling (Half Nelson, Drive), meanwhile, is a talented pianist addicted to jazz and suffering similar humiliations, most recently from the jazz-hating nightclub owner (the ever glumly antic J. K. Simmons) who gives him the hook for bagging his Christmas playlist and tickling the ivories with verboten improvisations instead.

The film is all about pining for the lost glories of grander eras. To that end, writer-director Damien Chazelle, ably abetted by composer Justin Hurwitz and choreographer Mandy Moore, undertakes a cinematic archaeology, digging down through the decades to rescue and redeploy the ancient codes of another civilization—the Hollywood musical. The sweetly imitative results include an early scene, straight from the Rogers-Astaire playbook, with the soon-to-be lovers performing a coyly interactive number on and around a park bench overlooking the twinkling twilight of LA.

Let’s be clear. Emma Stone is no Ginger Rogers, and Ryan Gosling is certainly no Fred Astaire. Those musical stars were song-and-dance specialists with roots in vaudeville. With today’s stars, the singing and dancing have to be jerry-rigged, and the result typically has the look—and sound—of a patch job. (Remember Johnny Depp in Sweeney Todd?) Stone and Gosling do as well as you could hope, but the dance routines endear more than impress, and voices are thin. Beyond that, both exude, as contemporary film actors, a familiar sense of pedestrian realism by which those earlier stars were blissfully unimpeded. Astaire was the opposite of a cinematic Everyman, possessing an ethereal poise, touched with grace, that no actor of today can hope to attain.

But that’s all right; La La Land is about, among other things, the importance of gamely doing your best, and on these terms it meets its own standard admirably. And the film has an authentic whimsy. Director, writer, and choreographer work seamlessly together to blur the line between reality and fantasy. With no ado, the film simply takes off, as in a scene where the couple float through the ether of the planetarium at Griffith Observatory—the setting also a nod to Rebel Without A Cause—or in the final, dreamlike sequence, where the lighter-than-air fantasy mode deftly expresses one character’s momentary imagining of an alternative destiny.

Enthusiastic and hopeful, with a salutary note of bittersweetness, La La Land exudes that rare quality, intelligent nostalgia. This romance of big-screen Hollywood is about as light on its feet as a movie in our time can be. It’s Singin’ in the Rain, An American in Paris, and Vincente Minelli’s The Band Wagon, all poured together and served fizzing and bubbling over the rim. And that’s—well, entertainment.

BY NOW YOU KNOW about director Martin Scorsese’s decades-long attempt to make a movie out of Shusaku Endo’s 1966 novel Silence. The novel tells of a brutal period in Japan’s history, when feudal lords expelled Catholic missionaries and tortured or killed thousands of Japanese Catholics. Taking off from an actual Portuguese Jesuit priest, Cristóvão Ferreira (Liam Neeson), who in 1633 apostatized after being tortured, then disappeared into Japanese society, the film chronicles the travails of two fictional Jesuit priests sent to minister to the “hidden Christians” of Japan and to investigate the fate of Ferreira. Captured by samurai, the priests are forced to witness executions and tortures; the drama hinges on whether one of them, Rodrigues (Andrew Garfield), will capitulate and apostatize by stepping on a fumie, an engraved image of Christ deployed by inquisitors to ferret out hidden Christians.

It’s not surprising that Scorsese would make a film about faith. His early movies were marinated in the Catholicism of his boyhood in New York’s Little Italy, and his oeuvre includes The Last Temptation of Christ. But I wouldn’t have expected this film. Scorsese’s best works over the half-century of his career—I’m thinking of Goodfellas, Raging Bull, The Departed, Mean Streets—brim with male energies carried along on a sea of aggressive talk, often with soundtracks in which operatic arias and rock-and-roll raucously coexist. The director himself, in person, as I discovered in our interview earlier this winter, is a genially garrulous man who talks really fast. The Last Temptation of Christ was so full of talk—abjuring conventional Bible-epic accents to feature Harvey Keitel as a wiseguy New Yawk–sounding Judas—that it might have been called Mean Streets: Nazareth. So the surprise is finding, at the center of the new film, solitude and a dark meditativeness.

I say dark, because the meditation is born of isolation, captivity, and fear; and the solitude percolates with doubt. In a voiced-over diary entry, Fr. Rodrigues describes his dread at thinking “that while men raise their voices in anguish, God remains with folded arms, silent.” Amplifying this silence in the film is a visual lavishness also unusual in Scorsese—his gifted cameraman, Rodrigo Prieto, capturing an ominous beauty that conduces well to the priests’ trials of doubt. Images of a nighttime landing on a remote island, or of a quiet rain falling on the mountainside hut where villagers hide the two missionaries, convey an imposing sense of isolation that highlights the steely resources of spirit required of them. What kind of Christian faith is it that they are ministering to, they wonder, among these isolated and even wretched peasants, who long for “Paraiso” (paradise) and clamor for any kind of trinket that the priests can bestow? And if the priests doubt the reality of that faith, then what is their own faith, as priests? Silence starts from external privations and emergencies, then works implacably inward, peeling back one layer of spiritual crisis after another.

Scorsese and co-writer Jay Cocks work hard to navigate a central dramatic crux—the question of apostatizing—that is theologically difficult for a modern audience. Shouldn’t the decision to step on an image of Christ be a slam dunk for Rodrigues, since it means saving his faithful from torture and death—and since, after all, he can say or do anything, while inwardly keeping his fingers crossed? But this reaction depends on modern divisions of soul, self, and society—and conceptions of salvation—that Christians of that era would have perceived differently. The early Christians regarded apostasy as a heinous crime; in Matthew 12:32 Jesus warns that “anyone who speaks against the Holy Spirit will not be forgiven, either in this age or in the age to come.” The story of St. Perpetua tells of her refusal to renounce her faith, even though it meant that her infant son would never know her; when her own pagan father begged her to renounce, she said, “Do you see this vase? Could it be called by any other name than it is? Just so am I a Christian.” Silence challenges viewers to comprehend a view of faith as an unrenounceable essence of identity.

Though Endo’s take on Christianity’s prospects in Japan was gloomy, and Europeans were barred from the country for two centuries following the events of Silence, the story had a surprising and moving conclusion. When communication with Europe was resumed after the “opening” of Japan in the mid-nineteenth century, European priests holding Mass for the newly established foreign community were astonished to see Japanese fishermen come forward to join. They had been carrying on Christian services secretly, it turned out, for two hundred years. This coda lies well beyond the scope of the movie, but Scorsese finds a way to hint at it, closing his film with an indelible image of Christian faith.

Silence won’t go down among my very favorite Scorsese films. But I believe it will gain a special place in his oeuvre, as a film in which the director steps back in uncharacteristic wonder, even awe, at the mystery of his material. Years ago I attended a talk by poet Donald Hall. Then seventy-four—exactly the age Scorsese is now—he spoke of the difficulty, after a lifetime writing poetry, of doing anything different from what he’d done before, and of his perpetual hope of “making a new noise”—which, as a poet and creative artist, he meant both metaphorically and literally.

Silence is this kind of breakthrough for Martin Scorsese: a new noise, or rather, a new quiet.