Last Monday, Archbishop Carlo Maria Vigano, Vatican ambassador to the United States, reminded the U.S. Conference of Catholic Bishops that Pope Francis prefers shepherds who smell like the sheep, not ermine. The speech was remarkable for its directness. "[Francis] wants 'pastoral' bishops," Vigano told the USCCB, who were preparing to vote for their next president, "not bishops who profess or follow a particular ideology." What's more, Vigano cited a text well loved by liberal Catholics, Pope Paul VI's Evangelii Nuntiandi (1975): "It is primarily by her conduct and by her life that the church will evangelize the world, in other words by her living witness of fidelity to the Lord Jesus — the witness of poverty and detachment, of freedom in the face of the powers of this world, in short, the witness of sanctity."

That Vigano chose to lean on Evangelii Nuntiandi is even more interesting because of its history. The document was written in response to the synod of bishops on evangelization, and it conceives of the church not only as teacher but also as learner:

In advance of next year's synod, Pope Francis has asked the world's bishops to ask their parishioners about a range of issues, including gay marriage and contraception, and report back. He wants to know where his people are. "For the church," Paul VI wrote, "evangelizing means bringing the Good News into all the strata of humanity, and through its influence transforming humanity from within and making it new." Sound familiar? (For more of Pope Francis's commentary on the missionary character of the church, and the kinds of bishops required to carry it out, see his recent message to Guadalupe pilgrims: "The attitude of the true shepherd is not that of a courtier or of a mere functionary, focusing principally on discipline, rules and organizational mechanisms.")

Most of Vigano's speech reads like a rearticulation of Pope Francis's call for Christians not to get trapped in the sacristy. But about two-thirds of the way in, it gets weird. Vigano drops in an apocalyptic  passage attributed to John Paul II, in which the late pope warns that "we are now facing the final confrontation between the church and the anti-church, between the gospel and the anti-gospel, between Christ and the antichrist." Sounds scary. Vigano claims John Paul delivered those remarks in a 1976 speech at a Eucharistic congress in Philadelphia. But that address doesn't contain those words.

Run a search on the passage and you'll find it all over (often conservative) Catholic websites. George Weigel refers to it in his biography of John Paul II, Witness to Hope: "These remarks are cited on the editorial page of the Wall Street Journal, November 9, 1978, and attributed to Wojtyla's 'last speech in the U.S. in September 1976, as quoted in the New York City News (an interim strike newspaper).'" Sure enough, that's where it appeared. 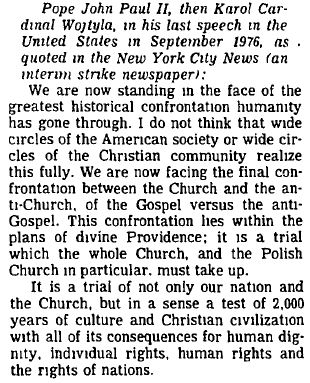 From August 10 to November 5, 1978, a strike shut down New York City's three major newspapers. I can't find the New York City News edition that first quoted the speech. Nor can I find the rest of the speech. Just this excerpt. In some places it's mistakenly identified as part of Wojtyla's '76 talk in Philadelphia. Others say it's from a speech he gave to the U.S. bishops. Vigano claims John Paul adapted the comments from the diary of St. Faustina Kowalska, who "greatly influenced [John Paul's] spirituality." But I searched that text for key terms in the passage and came up with nothing. Stranger still, Vigano's version of the text is slightly different. He adds "courageously" to the last sentence of the first paragraph. Was he working with a different text? Where did he get it? And why does Wojtyla refer to "our nation"? Is he talking about the Polish church? The United States?

So what gives? Why did the nuncio go fishing for a thinly sourced John Paul II quote that's so out of keeping with the rest of his address? For the sake of the appearance of continuity? Because he knows how many U.S. bishops were appointed by John Paul? I'm at a loss. How about you?

(Update: See John Hittinger's comment below for some good intel. The hive mind at work.)