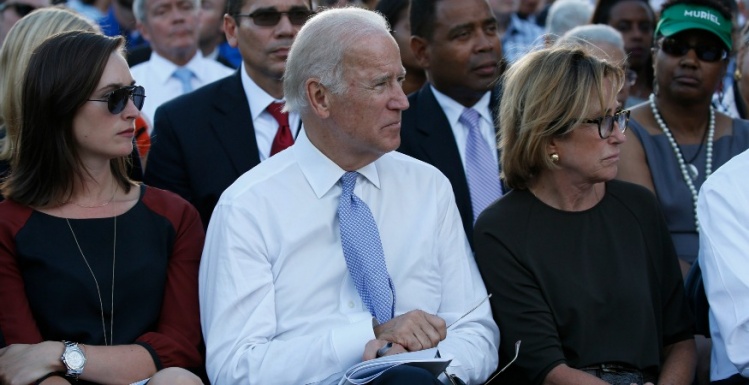 It was a withdrawal speech that sounded like an announcement speech, and it perfectly captured the aching ambivalence of Joe Biden.

He wanted to run for president. He had his issues. He had President Obama's record and was proud to defend it. And the man who noted he’s often called “Middle-Class Joe” felt he had never been a better match for the historical moment. Democrats are more comfortable than ever with Obama’s legacy. And many, inside the party and out, longed for someone who can campaign with credibility on the theme Biden sounded: “It all starts with giving the middle class a fighting chance.”

Biden also clearly believed that despite the country’s deep political divisions--or, perhaps because of their stubborn endurance--he could run, as Obama did in 2008, against the very idea of political conflict. “I don't think we should look at Republicans as our enemies,” he said. “They are our opposition. They’re not our enemies. And for the sake of the country, we have to work together.”

Those words were taken by the political cognoscenti as a not-so-subtle shot at Hillary Clinton, and perhaps they were. But this sentiment also defines Biden. He came to the Senate at the age of thirty in 1973, when Washington was a much less partisan place.

He can, of course, be a joyful Democratic warrior. His avuncular and occasionally acerbic takedown of Paul Ryan in the 2012 vice presidential debate walked millions of Democrats away from severe depression after Obama’s indifferent performance in the first presidential debate against Mitt Romney. But Biden has always had Republican friends, and he knows that’s the way politics should be.

So why didn’t he run in a race he so badly wanted to join? There are obviously political explanations. By waiting as long as he did, he gave Clinton her opportunity for political resurrection in the first Democratic debate. The longing for Biden, so palpable among some of the party pros the day before Clinton’s strong performance, dissipated immediately afterward. Many of these Democrats still liked Biden. They no longer felt they needed him.

There was also Kevin McCarthy, the House majority leader who threw Clinton a lifeline by suggesting that House Republicans’ investigation of Benghazi was designed at least in part to bring down her poll numbers. Suddenly, defending Clinton against Republican partisanship became a unifying Democratic cause. All by himself, McCarthy undercut one of the strongest rationales for a Biden candidacy.

Shots at Biden in recent days--about, for example, what exactly he said and thought about Obama’s decision to try to kill Osama bin Laden--were also a sign of coming distractions and unpleasantness. Perhaps these, too, gave Biden second thoughts, although someone who has taken as many hard hits as he has over the years certainly knew already what awaited him if he ran.

In any event, there is a problem with all of these purely political explanations for Biden’s choice: None tells us why he delayed and delayed and delayed, providing Clinton the openings she seized. There was just one reason, his bottomless grief over the death of his son Beau at age forty-six in May.

What Biden told Stephen Colbert last month is what he was telling his friends, and it rang entirely true about a man for whom family is not a word trotted out for political consumption but a commitment that goes to the core of who he is--and what makes him such an attractive human being.

“I don't think any man or woman should run for president,” Biden said then, “unless, number one, they know exactly why they would want to be president and, two, they can look at folks out there and say, ‘I promise you, you have my whole heart, my whole soul, my energy and my passion to do this.’ And, and, I’d be lying if I said that I knew I was there.”

But he wanted to be there, which is why this choice was so painful and so hard.

Biden’s passion for faith and family has been his moral compass throughout his life. In explaining his worldview Wednesday, he turned, as he often has, to his father's insistence upon “affording every single person dignity.” This is the obligation that should animate public life. Biden may not be running for president, but he owes it to his dad to keep his promise never to be silent. Fortunately, silence is something he’ll never be good at.