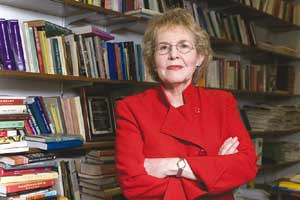 The political theorist Jean Bethke Elshtain died yesterday at the age of seventy-two. The author of over a dozen books, including Women and War (1987), Democracy on Trial (1993), Augustine and the Limits of Politics (1996), and Sovereignty: God, State, Self (2008), Eshtain was a frequent contributor to Commonweal. Over the past four decades she covered many subjects in our pages: feminism and the family, just war, criminal justice, capitalism and its discontents. In a 2006 review, she wrote about the conservatism of Andrew Sullivan. In 2004 she wrote a terse but incisive review of Charles Murray's defense of libertarianism:

The depth and breadth of Murray’s optimism knows almost no bounds. (Some might uncharitably call this naïveté.) Working from a market model through which economic freedom generates "spontaneous order," Murray generalizes to the rest of life. We will always be mindful of our personal responsibilities. So, to further this project, government must cease and desist in lots of arenas: No more regulation of products and services, but tighter enforcement of liability law; no more regulation of terms of employment, but tighter protection against employer force and fraud; no more regulation of workplaces, but ever more vigilant enforcement of liability; eliminate all extant civil rights regulations, but replace them with a constitutional amendment that does not permit any government at any level to "pass any law that requires discrimination by ethnicity, race, religion, or creed." And so on. In fact, Murray’s libertarian polity ironically depends on the passage of a small blizzard of constitutional amendments in order to get things cranked up right. For example: We also need a constitutional amendment to the effect that "Congress shall provide for the enforcement of laws against fraud and deceptive practice and shall provide for efficient administration of civil tort law." Congress, in his scheme of things, becomes one big tort overseer.

In a 1972 article, Elshtain wrote about her complicated relationship to the Catholic Church:

I don't think much about the Church anymore. But I know what I expect of it in a time of pervasive despair: there are hungry to be fed, trembling to be clothed, homeless to be housed, frightened to be comforted. There are systems of oppression and exploitation to fight and to condemn. To this end, the Church must as never before confront and come to terms with socialist theory for of all the possibilities for restructuring society, for narrowing if not eliminating the unconscionable gap between the many poor and the few rich, for providing minimal dignity in the form of clothing, shelter, health care and education, socialism offers the clearest alternative to the exploitative present. Oh yes, the consumer cornucopia in which goodies were dispensed in disproportionate amounts to successful little American boys and girls was never supposed to end. But end it must. And end it should.

Perhaps the loss of faith is really a loss of innocence. As painful as that may be, it isn't necessarily bad. A democratic socialism, erected on a foundation of respect for persons, on a belief in the dignity of each and every human being in the eyes of God and man, owes much to Christianity. For St. Thomas Aquinas, for example, man was a political and social animal. Secular rule and dominion were ordained by God to achieve earthly peace and justice. A restructured society, one not dedicated to the protection of the pursuit of private profit, might well move to fulfill both the Thomist vision of secular dignity and justice as well as the Marxist concept of the non-alienated society in which people truly become themselves as they share in labor for the common good.

What, finally, do I thlnk of the Church? Well, it is something which is always there: one secure point of reference in a fragmented and apparently random world. I'm happy that it's there, but then I'm happy that Long's Peak in my home state of Colorado is always in the same place when I journey westward each summer. I know that there is ferment and change within the Church. But too often to those of us outside it the ferment seems, at best, focused on rather arcane or trivial matters. When the Church makes common cause with those who struggle for earthly justice and equality I may not overcome my many years of railing and flirting with it from afar (in other words, there shall be no marriage) but I will gladly join hands in a struggle to ennoble the earthly realm by eliminating from it those systems of privilege and exploitation which do violence to the bodies and spirits of human beings all of whom are equally children of God

She did end up "joining hands" with Catholics in various struggles, though not always the ones she anticipated in 1972. The flirtation became less and less distant until, in 2011, she was received into the church.

Surowiecki on the debt ceiling