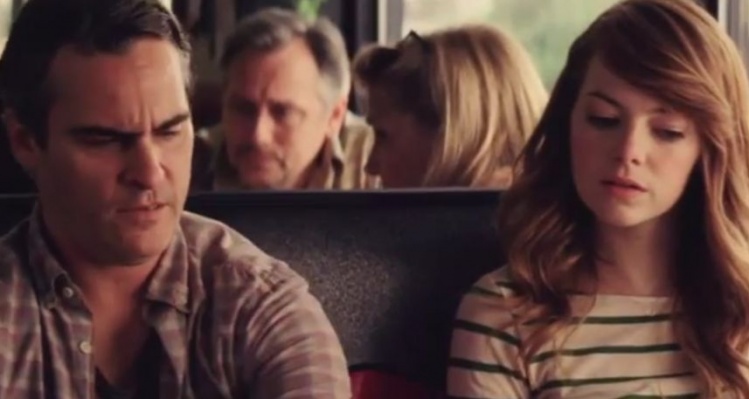 You will never see a movie better designed or more carefully premeditated than Woody Allen’s Irrational Man. Notwithstanding the film’s title, not a scintilla of irrationality finds its way into Allen’s writing or direction.

The story offers a comedy of horrors meant to make us grimace rather than laugh. Abe Lucas (Joaquin Phoenix) is a philosophy professor with the sodden charisma of a Dylan Thomas. He brings to his new teaching post at a fictional Newport college a reputation for both brilliance and dissoluteness. Although he’s devoted himself in the past to worthy causes such as relief work in Bangladesh, the violent death of a friend in the Middle East has plunged him into a depression from which neither his work nor an affair with a married colleague, Rita (Parker Posey), can rouse him. He now believes that all philosophizing is futile, a vain escape into words, words, words. Then, while socializing with his favorite student, Jill (Emma Stone), he overhears a woman complaining that a corrupt judge is separating her from her child in a divorce case. Abe, a great admirer of Crime and Punishment (though we may come to wonder if he ever got through the later chapters), determines to make his mark on the world by killing the judge, and both his decision and, later, the deed itself, lift him into an exhilaration that entails a renewed sex life with both Rita and Jill. Eventually the two women come to suspect the cause of Abe’s reawakening.

The opening scenes not only set forth the locale, the leading characters, and the first stage of the plot, but also adumbrate everything to come. When Abe is praised for his treatise on “situational ethics,” we are being alerted that a perverted version of that concept will lead to murder. When Jill acknowledges that Abe has influenced her ideas about “randomness and chance,” this is a wry foreshadowing of the role chance will play at a crucial moment in her life. Even a seemingly casual object, a shoddy little flashlight won by Abe at a fair and given to Jill, turns out to have grave consequences, and there’s irony in the fact that he dismisses his gift as a bauble while Jill insists on its practicality. Little does either of them know…

Allen’s shrewd planning extends beyond the script to its visualization. Abetted by Darius Khondji’s cinematography, with its subtle recurrence of soft pinks and subdued greens, the director has captured the genteel-bohemian look of a college located near a handsome city and makes the placid beauty of the place an ironic counterpoint to the horrors Abe plots and performs. And Allen’s choice of the jazz standard “The In Crowd” as the main theme on his soundtrack carries its own sting, since for him (at least nowadays) we’re all trying to be part of the in-crowd, even when the real insiders are sacrificing morality to convenience and sybaritic pleasure. Trouble is, the film is all planning, all schema. Too little spontaneity is permitted within the master plan. What’s missing are the vivid details, the dramatic nuances and shadings, the generosity of sidelights that are necessary to bring a movie to life. Worse than that, some scenes are marked by a cold obliviousness of human realities.

For instance: Most colleges nowadays maintain fairly strict codes forbidding sexual relationships between undergraduates and their teachers. Yet not only are Jill and Abe having an affair, but the whole college seems to know about it. So why isn’t the professor called on the carpet? If he did get in trouble and were to bluff or blackmail or squirm his way out of it, this might enrich the satire, but Allen just doesn’t address the issue—even after Abe himself mentions it.

Abe’s adultery with Rita thickens the weather of amorality but this subplot also includes some implausibilities. Early on, Rita’s husband conveniently goes out of town and doesn’t come back till the movie is almost over. At which point Allen stages a break-up scene that brings nothing new to the story and whose dialogue might have been lifted from a soap opera.

Jill is not only a major character but one of the film’s two narrators. (Abe’s the other.) Yet how little we know about her—and how confusing the little we do. We often see her in the company of her parents, but is she living with them? Are she and Abe carrying on in her parents’ home? And if so, what do they make of this? Such questions might occur to any viewer paying attention, yet Allen seems curiously incurious about Jill’s inner life and background. For him she apparently exists only to keep the plot spinning and to serve as an emblem of feckless youth in feckless times.

I was especially struck by the scene in which Jill, still believing Abe to be innocent, meets with Rita to hear the latter’s theory that Abe is most likely the judge’s murderer. Since Rita expresses this suspicion only after Abe has replaced her with Jill, wouldn’t Jill wonder whether the charge was motivated by jealousy? And wouldn’t this lead to a confrontation between the two women? Yet Allen directs the actresses to interact as calmly as if they were drawing up a reading list for a book club. Perhaps he thought the scene would play more subtly if the tensions remained subterranean and only rippled the cool surface of a “civilized” conversation. But they are buried too deep to make dramatic sense. Not that I can complain about Emma Stone’s performance as Jill. She’s a high-energy actress in command of so many emotional colors that you suspend your doubts about the character until the movie is over.

On the other hand, Joaquin Phoenix is a disaster as Abe Lucas. In the early scenes he falls right into the trap waiting for any actor playing a depressive: he simply walks around, slack-jawed and lumbering, without communicating any of the inner turmoil or projecting the spiritual wreckage that women like Jill have found strangely attractive at least since the time of Lord Byron. (Compare Phoenix’s performance in this film with his performance in Her, where he makes a neurotic nerd seem quirky, interesting, and unpredictable.) In the post-murder scenes, Phoenix plays Abe as a conventional scumbag, but is conventionality really what Allen had in mind?

Perhaps Allen was able to put this despairing film together so neatly because he no longer has any of the doubts that keep other directors or dramatists from too quickly making up their minds about the meanings and destinations of their stories and characters. He’s entitled to his despair (if that’s what it is) but it makes this film too much like a machine, its characters more like well-oiled gears than human beings. You leave Irrational Man feeling neither elated nor depressed, neither confused nor satisfied nor even ambivalent. You shrug. We used to go to Woody Allen movies for more than that.