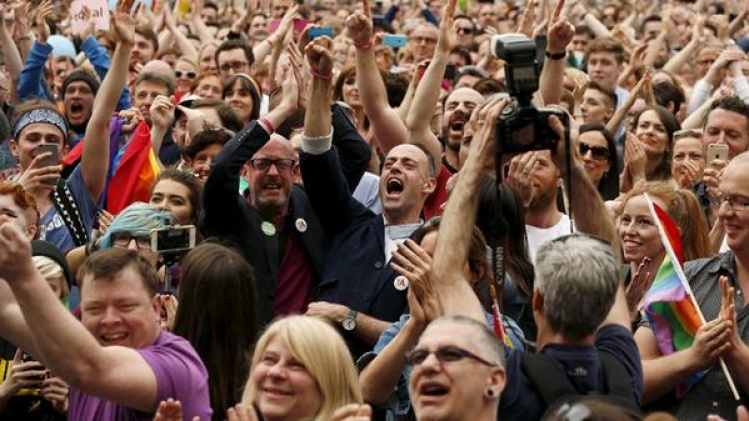 BOSTON -- Consider the stunned disbelief, perhaps of a somewhat aggressive sort, that would have greeted anyone who might have told a tavern crowd in Dorchester or Southie three decades ago that Ireland would be the first nation in the world to approve gay marriage by popular vote.

It is a mark of how much has changed in such a short time that Ireland's vote for gay marriage last week was, in the end, the expected outcome -- even if the breadth of marriage equality's victory was breathtaking.

The referendum carried 62 percent of the vote. Only one of the nation's 43 parliamentary constituencies, Roscommon-South Leitrim, voted "no," and even there, supporters won nearly 49 percent of the vote. The rural-urban split many anticipated did not materialize. Socially conservative areas that had opposed liberalizing Ireland's abortion and divorce laws in the past voted to allow gays and lesbians to marry.

The different outcome this time says something about why social liberalism finds its strongest expression these days around gay rights questions. If politics is often polarized because social changes can leave behind both winners and losers, it is far harder to make a case that there are any losers in the effort to provide for equality around sexual orientation. Ireland, a heartland of Catholicism that did so much to shape the Catholic Church in the United States, seemed to see things exactly this way.

But it's also true that Ireland has undergone a sweeping cultural transformation in a very short time. Irish faith in the church was badly shaken by the hierarchy's cover-up of the sex-abuse crisis even as the island was overtaken by a raucous materialism during the economic boom between 1995 and 2008. It was the era of the "Celtic tiger," a prime example of how good things could be under capitalism.

Yet if God receded from Irish life, mammon received its comeuppance when the financial bubble burst, wreaking havoc. Ireland has since had to rebuild not only its economy but also its sense of meaning.

It's striking that Dublin Archbishop Diarmuid Martin, one of Ireland's most candid prelates in facing up to the costs and the shame of the abuse scandal, used the referendum outcome not as an occasion for an angry jeremiad but as an opportunity for an examination of conscience.

He also went out of his way to acknowledge the elation felt by those who had been forced into the shadows of Irish life. "I appreciate how gay and lesbian men and women feel on this day," he said. "That they feel this is something that is enriching the way they live. I think it is a social revolution."

And the archbishop specifically focused on the imperative "to look at the areas where we really have to start and say, 'Look, have we drifted away completely from young people?'"

It is a question highly relevant to religious institutions far beyond the Irish Sea, but it has clearly not penetrated everywhere. The Vatican's secretary of state, Cardinal Pietro Parolin, was less nuanced on Tuesday night, declaring the Irish result as not only "a defeat for Christian principles" but also "a defeat for humanity."

As if anticipating the Vatican's response, Fintan O'Toole, the Irish Times columnist and one of his country's most searching social critics, argued over the weekend that while the referendum result "looks like a defeat for religious conservatives ... nobody has been defeated."

"Nobody has been diminished," he continued. "Irish people comprehensively rejected the notion that our republic is a zero-sum game, that what is given to one must be taken from another. Everybody gains from equality -- even those who didn't think they wanted it. Over time, those who are in a minority on this issue will come to appreciate the value of living in a pluralist democracy in which minorities are respected."

And there, finally, is the rub. For advocates of gay marriage, the issue is about the equal dignity of human beings -- a thoroughly Christian principle -- far more than it is about a particular view of sexual morality. Indeed, the very embrace of marriage as a central goal of the gay rights movement can itself be seen as a turn toward an updated brand of traditionalism.

Archbishop Martin seemed to understand this implicitly even as his country chose to endorse it explicitly.