The crisis in the Holy Land is ‘our issue,’ too.
By Jordan Denari Duffner
Middle East
Foreign Affairs 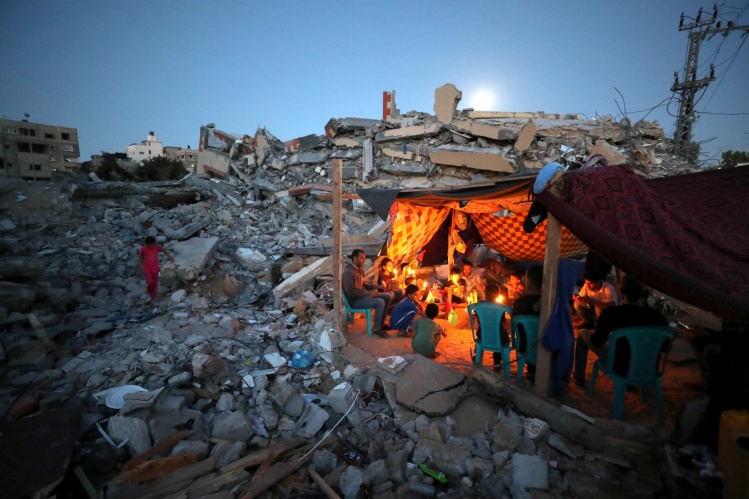 Palestinians hold candles in a makeshift tent amid the rubble of their houses, destroyed by Israeli airstrikes during Israel-Hamas fighting, May 25, 2021 (CNS photo/Mohammed Salem, Reuters).

There seems to be an unstated feeling among many Catholics in the United States, perhaps unconscious, that the political and humanitarian situation in the Holy Land is not really ‘‘our’’ issue. I have observed this especially in recent weeks, when the Israeli-Palestinian conflict again made international headlines. For days and even weeks before that, Muslim and Jewish individuals on my social-media feeds expressed deep concern about the Israeli military incursion into the Al-Aqsa mosque during some of the holiest days on the Muslim calendar, as well as Israeli settlers’ attempt to forcibly remove Palestinian residents from Jerusalem’s Sheikh Jarrah neighborhood. But from Catholics there was mostly silence; only after the Israeli military bombed apartment buildings in Gaza and Hamas fired rockets into Israel did some begin to chime in.

It can be easy to misperceive events in the Holy Land as a Jewish-Muslim conflict, one that we need only observe and grieve from a distance. Many U.S. Catholics feel divorced from the events in Holy Land because we forget—or perhaps have never known—that there are Palestinian Catholics and other Christians. Yet in many ways, we are implicated. Our faith enjoins us to push for justice not only on behalf of our Palestinian co-religionists, but also for the dignity and rights of all people—regardless of their religion, ethnicity, or nationality. In the Holy Land, this means bearing witness to the disproportionate suffering faced by Palestinians. It also means advocating for a just peace in the region even after the headlines pass and the bombs have ceased to drop.

Trips to Israel and the West Bank over the past several years alerted me to aspects of the situation there that I hadn’t fully appreciated before. In mainstream U.S. media outlets, I had read about periodic “flare-ups” of violence between Israel and Palestinian groups, as well as reprehensible Palestinian attacks on Israeli civilians. These stories made the two sides seem equally matched, and painted Palestinian groups as the main aggressors.

But that impression does not match reality. Palestinians in the West Bank face a host of constant (yet underreported) injustices: frequent killings at the hands of Israeli forces, warrantless arrests and incarceration (often of children), confiscation of land and demolition of homes, restrictions on travel and access to hospitals and holy sites, internal displacement and foreign exile, vigilante violence and intimidation by Israeli settlers, and systematic humiliation at checkpoints and border crossings. Particularly heartbreaking are the stories of Palestinian women forced to give birth at Israeli-controlled checkpoints because they were not allowed through in time to reach the hospital. Some have even lost children as a result.

Palestinians who live in the impoverished and densely populated Strip compare it to an “open-air prison.”
sharetweet

These realities confront not only Muslims, but Christians, too. In Israel proper and the West Bank, many of the historic churches I have visited during pilgrimages have been set on fire and spray-painted with hateful messages by Israeli Jewish vandals. In Bethlehem, the West Bank town where Jesus was born, a towering cement wall snakes through the city. Billed as a “separation wall” to keep Israel safe from Palestinian aggression, the wall ignores the intended border for an eventual two-state solution. Instead in many places it slices through Palestinian land, cutting off family members from each other and making daily life a struggle.

Many Americans assume that the West Bank and Gaza are fully autonomous Palestinian territories. But Israel exerts considerable control over the West Bank and Gaza through military occupation, and Palestinians there lack many political rights. They liken the West Bank to a piece of Swiss cheese: small pockets governed by the Palestinian authority exist within broader Israeli control. Israel’s construction of housing for Jewish Israeli settlers in the West Bank—often supported financially by American Christian congregations, but illegal under international law—further impedes any potential two-state solution. For many Palestinians, it’s a continuation of the region’s tortured history of land confiscation and displacement, and a reminder of the broken promises of statehood for indigenous Palestinians made by the international community after the 1948 creation of the State of Israel as a Jewish homeland.

The situation in Gaza is even more dire than in the West Bank. Palestinians who live in the impoverished and densely populated Strip compare it to an “open-air prison,” in which Israeli forces have set up a blockade of basic goods, exert control over borders and airspace, and implement tight restrictions on entry and exit. These and other Israeli measures amount to “collective punishment,” illegal under international humanitarian law. Successive Israeli bombing campaigns (the latest killed over two hundred and fifty people) have reduced much of Gaza to rubble; even so, Israel continues to thwart the rebuilding of Palestinian homes and businesses. Although Israel withdrew settlements and permanent troops from Gaza years ago, the U.N. still considers it an “occupying power” there. None of this absolves groups like Hamas for its targeting of Israeli civilians in rocket attacks—it killed thirteen people in Israel during the recent attacks—but it does provide context for the news stories we consume.

Today, life in the territory that Israel controls is fundamentally unequal. The Israeli human rights organization B’Tselem and Human Rights Watch both characterize conditions across Gaza, the West Bank, and Israel proper as de facto “apartheid,” since the Israeli state is “advancing and cementing the supremacy of one group” over another. The Catholic bishops in the Holy Land have also raised warnings, especially about the impact of Israel’s 2018 “Nation State Law.” The legislation, according to the bishops, “provide[s] a constitutional and legal basis for discrimination among Israel’s citizens,” privileging Jewish citizens above all others. They have called for its repeal, noting that Israel’s status as a democracy is jeopardized if its non-Jewish citizens—including Christians—have fewer rights.

The reality of Israeli dominance over Palestinians makes violence against Palestinians a fact of life in the region. It shouldn’t take attacks on Israelis alone for us to notice. The loss of each life—Israeli, Palestinian, or otherwise—is a travesty, and as Catholics we are called to secure the dignity and promote the flourishing of all. We also need to pay special attention to the “least of these,” the ones who are suffering the most harm, and stand up on their behalf.

There are many ways we can do this, including political advocacy. Both Republican and Democratic politicians have long enabled Israel’s harmful policies against Palestinians either by active support or through their silence. One way we can help is to pressure our lawmakers to place conditions on U.S. financial support to Israel and its military. Even after the recent devastating killing in Gaza, President Biden approved a commercial weapons sale to Israel that could be used against Palestinian civilians. It’s time our leaders held Israel to account for its human-rights abuses.

Another step is to engage in boycotts aimed at pressuring the state of Israel to comply with international law in its treatment of Palestinians. Boycotts were employed in the struggle to end apartheid in South Africa and to upend segregation in Jim Crow America. Palestinian activists ask us to take up this same method today. Educating ourselves about the daily reality of Palestinian Christians and amplifying their calls for help in U.S. Catholic circles are vital, too.

It should go without saying that advocating for the rights and dignity of Palestinians is wholly consistent with a commitment to ensure the rights and dignity of Jewish Israelis or any other group. As the U.S. Catholic Bishops pointed out in the 1986 pastoral letter Economic Justice for All, affirming a preferential option for the poor and vulnerable, one of the principles of Catholic social teaching, “does not mean pitting one group against another.” Instead, the bishops continue, such an option “calls us to strengthen the whole community by assisting those who are most vulnerable.” Palestinians have been marginalized and dehumanized too often, and for too long.

Advocating for justice in the Holy Land must never involve Islamophobia or anti-semitism; these forms of bigotry undermine and contradict the cause. Fortunately, there are many Christians, Jews, Muslims, and others who already recognize this, whose activism reflects this moral consistency, and who are already working together for change. We can, and should, join them.