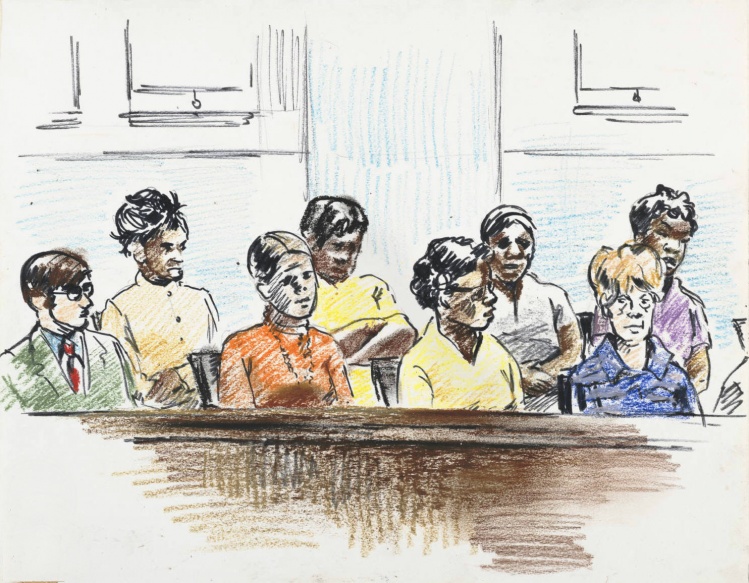 I’ve been called for jury duty three or four times, but was never selected until last month, when I was put on the jury for a civil case in Superior Court in Bridgeport, Connecticut. It was a long day. You’re expected to show up at 8:30 in the morning and often don’t leave until 5. Entering the court building, you go through metal detectors operated by court marshals. Much to my surprise, no containers of water or other liquid are allowed to come into the building. Vending machines are available inside. In Bridgeport, you take the elevator to the building’s top floor and take a seat in a large, stuffy room, along with approximately two hundred other prospective jurors. The air-conditioning is minimal. Registration, which begins at nine, takes about forty-five minutes, most of that time spent standing in line. There is nothing high-tech about the process. Paperwork and a driver’s license do the trick. Once registered, you take a small sticker that identifies you as a juror, and that must be worn at all times. If you go out of the building for lunch, you have to show the sticker to get back in. Once everyone is accounted for, a video about jury duty, narrated by judges and former jurors, is shown. The video is both informative and intended to assuage the anxieties of those unfamiliar with the judicial process. After the video, a judge appears in his robes to thank everyone for taking the time to perform “this important civic duty.”

I waxed a bit patriotic hearing those words. How often are we as citizens told that we have duties as well as rights? It reminded me of something the novelist John Lanchester wrote about his father in his memoir, Family Romance: A Love Story: “He grew up in a culture in which duty and reticence and honor and privacy and lack of ostentation were regarded as forms of goodness and public-spiritedness. Plenty of people still believe in all these things, but they have vanished from our public culture, or at least from our publicized culture, and no one celebrates them anymore, or even admits that they were once seen, and not so long ago, as virtues.”

In their reticence, lack of ostentation, and willingness to listen to one another, my fellow jurors demonstrated a genuine public-spiritedness.
sharetweet

Sitting and waiting to be selected for a jury along with a group of strangers, while HGTV is annoyingly playing on a large TV screen, is a bit like the dead time spent waiting in an airline terminal. Only, when it comes to jury selection, most of the flights never take off. Of the two hundred people called for jury duty, I doubt if more than seventy-five are selected on any given day. Most who show up are eventually dismissed without being selected. Of those selected, many are excused because of scheduling conflicts or rejected by lawyers during the voir-dire process. (Voir dire is Old French for “to speak the truth.”) In my case, the lawyers questioned more than twenty-five prospective jurors in order to get a jury of six, with two alternates.

On the day I was summoned, the large group of prospective jurors made up a predictable cross-section of citizens. I would guess there were as many women as men in the room. Bridgeport is a poor, largely minority city. Nevertheless, most of the people in the jury pool were white, presumably drawn mostly from the towns that border the city. The dress code was decidedly casual, despite the court’s request that people dress respectfully. T-shirts predominated, especially for the men, several of whom also wore baseball caps. Some of the caps were worn backwards, a fashion statement I have never completely understood. There was one bearded man in a yarmulke. Two or three men wore suit coats. While we waited to be called, most folks were silently on their phones, many using earphones. There was very little conversation. But there were other folks reading magazines, newspapers, and even books. One middle-aged, bespectacled man was intently poring over the fate of the Yankees in the back pages of the New York Post. The lean and tall young man sitting next to me, who seemed to view the entire spectacle skeptically, was reading Sam Harris’s Waking Up: A Guide to Spirituality Without Religion, while a lady across the room was deep into a book titled You Are a Badass. An older gentleman carried a copy of Resisting Happiness. This was not entirely surprising, since his T-shirt proclaimed: “I’m not anti-social. I’m just selectively social.” My guess is that this conspicuous signaling was intended to show that he would be an unhelpful juror.

As I gazed around the room, I was struck by one impression in particular. Many of my fellow prospective jurors, like the restless fellow sitting next to me, appeared entirely too young for jury duty. Where were the adults? Doesn’t one need a considerable amount of life experience before one can render a just verdict in any particular case? It slowly dawned on me, however, that I, and not my seemingly too youthful companions, was the outlier. As someone in his late sixties, I was one of the oldest people in the room. Jury duty is not required after seventy. And as it turned out, I was the oldest person on the jury I eventually served on. In our deliberations, my younger colleagues complained good-naturedly about the number of days the trial took. But in their reticence, lack of ostentation, and willingness to listen to one another, my fellow jurors demonstrated a genuine public-spiritedness. We did not agree about everything, but we agreed about the verdict. Carrying out our civic duty was a welcome respite from the vacuous posturing of so much of our public and political culture today. I’d be happy to do it again, even at my advanced age.