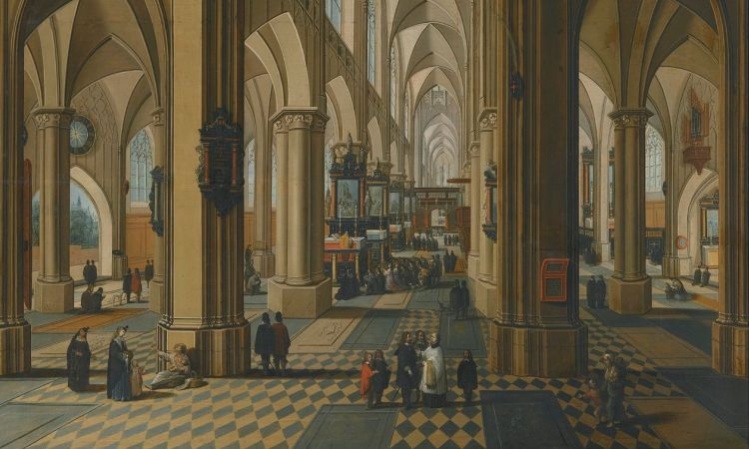 Visit the art galleries and museums in New York, Chicago, Los Angeles, wherever the big players are, and one thing becomes obvious: there is no subject—not sex, not women’s issues, not climate change, not capitalism, not torture, not race relations, not current domestic or international politics—that isn’t being tackled by one or more artists. Well, maybe one subject, religion.

At one time, art infused with religious subjects and imagery was the main work of fine artists in the Western world, in large measure because their patrons were officials of the Catholic Church. Nowadays, religion in art is a curiosity, perhaps permissible as a “postmodernist strategy,” as one critic described an exhibition of Archie Rand’s paintings, which over the years have increasingly contained elements of Jewish iconography. A major art dealer in Washington, D.C., told Edward Knippers, a figurative painter of biblical subjects who lives in Arlington, Virginia, “Ed, I’ve liked your work for years, but I don’t want to mark my gallery with your subject matter.” Sincere expressions of spirituality or religious faith are largely absent from art galleries, except the ones that various churches and synagogues around the United States maintain or the museums of religiously affiliated colleges and universities. Instead, religion appears—when it does appear—as an object of scorn or suspicion. For instance, a recent exhibition at the Virginia Museum of Contemporary Art (May 31–December 31), “Turn the Page: The First 10 Years of Hi-Fructose,” included several paintings by Mark Ryden, including the 1997 Rosie’s Tea Party (a cartoony figure of a little girl in a Communion dress sawing into a ham that bears a Latin inscription that translates to “Mystical Body of Christ”). Another example is Niki Johnson’s 2013 portrait of Pope Benedict XVI, Eggs Benedict, which was created with 17,000 multi-colored condoms and was acquired by the Milwaukee Art Museum in 2015. Some locals were unhappy, but online campaigns to get rid of both artworks proved unsuccessful.

Isn’t the contemporary art world large enough to encompass both religious belief and a critical stance toward religion? Commercial art galleries and museums, of course, are the endgame of the art world. Before an artist has work in a gallery or museum, he or she trained at an art school.

“When I was a graduate student,” said Patty Wickman, a painter who earned a Master of Fine Arts degree from the University of Colorado at Boulder, “I began making work that addressed ritual and spirituality, narrative and faith. I soon realized that in both academia and in the commercial art world it was better to be considered a former Catholic than to proclaim that I was a practicing Catholic, and God forbid that you were a Christian, especially an evangelical.” She teaches in the art department at the University of California at Los Angeles, where prospective faculty whose work reflects a religious outlook would have a difficult time getting hired. “We have accepted artists in our MFA program who investigate spiritual content in their work but most typically these are students who approach it critically.”

That view was reinforced by James Elkins, professor of art history, theory, and criticism at the School of the Art Institute of Chicago and author of On the Strange Place of Religion in Contemporary Art. He noted that, “since the 1960s, avant-garde visual art has been understood as primarily oppositional.” The art schools where artists receive their degree training concentrate on “criticality in relation to existing power structures,” be they received ideas, the church, or capitalism. “Therefore, religious art that does not present itself as critical of the religions it evokes would be seen as failing to participate in the more interesting streams of postmodern and contemporary practice.”

Cameron Anderson, executive director of Christians in the Visual Arts and a painter with a Master of Fine Arts from the Cranbrook Academy, claimed that a number of current students in studio-art MFA programs have told him that they are actively discouraged from including Christian imagery in their work by faculty members “to the degree that they are told they won’t get through the program unless they stop.” Islam and Eastern religions, even more mystical belief systems, may get more of a pass, but Christian—and, to a lesser extent, Judaic—imagery appears to make many people uncomfortable.

Much contemporary art involves personal identity, such as one’s race, gender, ethnicity, or sexual orientation, and religion is one more element of that. Elkins noted that those other identity markers, however, appear more fluid, open to changing and broadening interpretations, while religion seems more set in time and less open to reconsideration, certainly less tolerant of difference. To Ron Jones, president of the Memphis College of Art in Tennessee, artwork that references religious belief necessarily evokes “tired symbolism and sophomoric messaging,” which goes against the goal of helping each student find his or her “unique voice.” Religiously motivated artwork may be discouraged at the college, but “it’s not because the faculty are antireligious.”

The whys of the matter may seem a bit moot to some students. Michelle Arnold Paine, a painter who earned an undergraduate degree from the religiously affiliated Gordon College in Gloucester, Massachusetts, and an MFA at the University of New Hampshire, found that it took restraint on her part not to be provoked by students and faculty in the graduate program who were at times derisive of her religious beliefs and imagery. Her MFA thesis exhibit was a show of different darkened church interiors that she had seen in Italy, “and professors said to me, ‘Why do you keep doing those churches?’ I could have responded that I see the presence of God in them, but I didn’t want to be written off as a Christian artist.” She learned to keep her temper in check, not quit the program in frustration or adopt the ethos of the MFA department just to get along. “It required a certain amount of diplomacy on my part not to offend them,” Arnold said, but she didn’t come to art school uninformed or closed-minded.

By the time these artists reach the commercial art world, they know to keep their beliefs quiet or face rejection. “I’ve been told by dealers all the time, ‘I don’t want that crap in my gallery,’” said Archie Rand, a painter, Brooklyn College art professor, and member of the American Guild of Judaic Art. One notable Chelsea art dealer whom he did not want to name took a look at one series of paintings that referenced each of the 613 commandments or mitzvot in the Jewish Bible, saying “Well, if I were to show them, and I wouldn’t show them, I would extract all of the paintings that had circles”—that is, the most abstract images with the least recognizable Jewish imagery—“and just show those as a small group.”

Patty Wickman’s husband, installation artist Tim Hawkinson, said “I’m a bit shy about letting the art world know my religious beliefs. It’s not always politically correct, and the art world isn’t always welcoming to issues of spirituality.” Painter Makoto Fujimura, who claimed that “I am an artist who happens to be a Christian,” said “I worry that collectors would not look upon my work with favor anymore, were I known as a Christian artist.” Another artist, sculptor Sarah Jane, program coordinator at the Grunewald Guild, an artist community based in Leavenworth, Washington, noted that the “reason I use relatively little traditional Christian imagery is that I’m making art for a diverse audience that includes people from many religious backgrounds and sometimes none at all. My experience has been that religious symbols themselves sometimes carry more baggage than religious ideas, and can present a huge obstacle for people to enter into the artwork. Using more neutral imagery—whether it’s abstract forms or botanical images or the human figure—gives me an opportunity to explore deeply sacred and spiritual ideas without alienating anyone in that diverse audience.”

Many art writers themselves know little about religion and worry about discussing artworks with this content, because they don’t want to take it at face value and then get called out for missing the irony. Why else would someone refer to Archie Rand’s work as a “postmodernist strategy”? What does seem unnerving is the fear that many art-gallery and museum directors have about offending visitors, even when many of those museum officials bravely defend—on grounds of free expression—artwork that might force parents to cover their young children’s eyes. Others who worry about visitor response post “adult content” warning labels above curtained galleries. Fair enough. Artwork with spiritual or religious content may be good, bad, or indifferent like every other variety of art, but making it invisible won’t get rid of it.