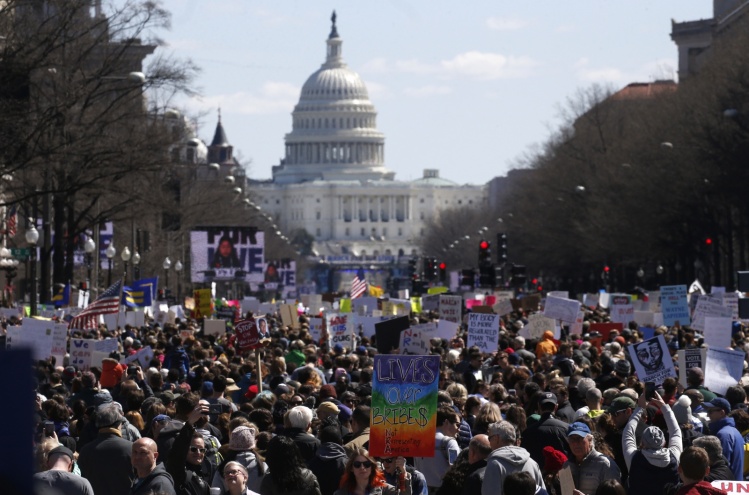 People gather near the U.S. Capitol during the March for Our Lives event March 24 in Washington. Hundreds of thousands converged on the nation's capital demanding gun control after recent school shootings. (CNS photo/Leah Millis, Reuters)

For several hours on Saturday, cynicism was banned from the streets of what on many days seems to be the most cynical city in the world.

Throngs estimated to number up to 800,000, and perhaps more, gathered because a group of determined, organized, eloquent and extremely shrewd high school students asked them to come, and because too many Americans have been killed by guns.

Suddenly, hope-mongers were stalking the nation’s capital. They believed, against so much past evidence, that the National Rifle Association could be routed.

The crowd seemed to expect it would require an election to usher in the reforms they seek. “Vote them out!” was one of the day’s dominant chants. All along the march route, clipboard-wielding volunteers sought to entice the faithful to register so they could cast ballots to achieve that end.

Cameron Kasky, one of the heroes of the Marjory Stoneman Douglas High School mobilization, drew raucous cheers when he began his speech with the words, “Welcome to the revolution.” He was not imagining the storming of the Bastille or the revolt in Petrograd. His promise was peaceable and refreshingly practical.

“The voters are coming,” he declared.

Cynicism, of course, was quickly restored to its normal place in the nation’s discourse. Tired complaints were hauled out to discount the “March for Our Lives” visionaries who hit the pavements in locales across red and blue America on Saturday. Big demonstrations were nice but meant little. The NRA had crushed opponents before and would do so again. Teens and twenty-somethings lacked the discipline to stay with what would inevitably be a long fight. Republican politicians wouldn’t break an alliance with the gun lobby that has served them so well.

No phony bipartisanship. No pretending that everyone approaches this issue with good will.
sharetweet

But there are tough-minded reasons to believe that the cynics are wrong, even if the fight ahead will be as hard as they say. To begin with, Saturday’s marches achieved something that has never been accomplished before. Guns have long been a voting issue for those who insist that any and every restriction on firearms is a danger to freedom. These marches finally established guns as a voting issue for those who (as the signs carried by demonstrators declared in various ways) place the desire to save innocent lives ahead of preserving unlimited access to weapons.

The Stoneman Douglas activists, including their able debaters and theater students, understood that their task was to alter the terms of the nation’s quarrel over guns and to take on the NRA’s shibboleths, right down to the basics. “Guns don’t kill people. People kill people.” So goes the old NRA slogan. “Actually, guns do kill people,” read a placard at the D.C. march.

And the new revolutionaries have been making the essential argument: that our current approach to firearms undercuts the rights of the unarmed far more than any restriction would ever impinge on the rights of gun owners. The NRA imagines a nation of universal gun-toting, an idea brilliantly mocked by Alex Wind, a student speaker who asked: “Are they going to arm the person wearing the Mickey Mouse costume at Disney?”

The unmistakably political character of this movement is another change. No phony bipartisanship. No pretending that everyone approaches this issue with good will. Thus the importance of “Vote them out.” Thus the imperative of casting the NRA as the adversary and all who welcome its money and support as complicit.

Finally, this march established the gun safety alliance as multi-racial and intersectional, reaching far beyond its traditional base among suburban white liberals. Few voices echoing from the platform were more powerful than eleven-year-old Naomi Wadler’s. She declared that young African-American women who were victims of gun violence would no longer be seen as “simply statistics instead of vibrant, beautiful girls full of potential.”

In 1960, the nation’s attention was captured by young civil rights activists who sat in to integrate lunch counters in Greensboro, North Carolina. It is not romanticizing the young to say that at times in our history, only those not beaten down by the defeats of the past could find the courage and the strategic initiative to win old fights in new ways. On a crisp and beautiful spring day we witnessed a new dawn in the struggle to end gun violence.