Hope Beyond the Headlines

How Millennials Are Responding to the Sex-Abuse Crisis
By Robert Christian
Sexual-abuse Crisis
Bishops
U.S. Catholicism 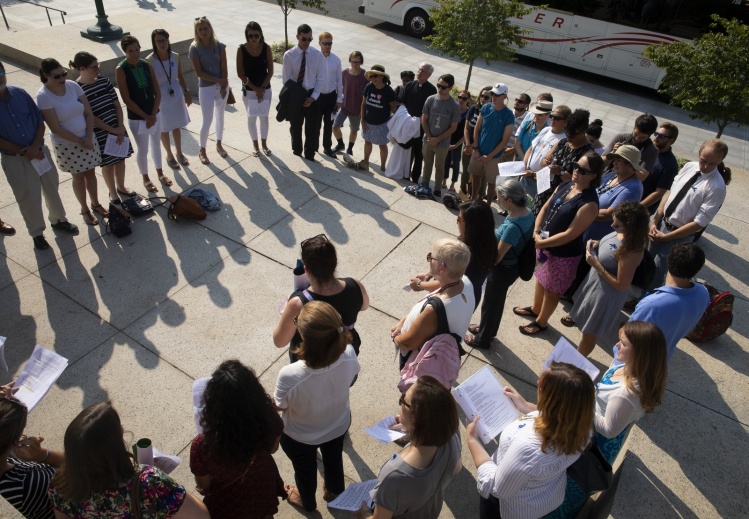 The Pennsylvania grand-jury report released earlier this month that documented the sexual abuse of over a thousand  victims by over three hundred priests during a seventy-year period in Pennsylvania, with bishops and other Catholic leaders in the state covering up the crimes, combined with revelations that ex-Cardinal Theodore McCarrick, the former archbishop of Washington, allegedly abused both seminarians and minors, has triggered yet another crisis within the U.S. church and beyond. Millennial Catholics—those of us in our 20s and 30s—are among those who have responded most forcefully to the behavior described in the report.

While a small group of ideologues have tried to hijack the crisis to promote their preexisting agenda against Vatican II, gay priests, or celibacy, the general response among millennial Catholics has transcended the many internal divisions that exist within the U.S. church. The anger is palpable. There is anger at the injustice that was perpetrated, anger at the pathetic response by members of the hierarchy across decades, and anger at the secrecy and cover-ups that kept it all quiet. There has also been anger at the way current bishops have responded—the feeling that their initial statements were disconnected from the experiences and sentiments of the people in the pews.

There is widespread sorrow, as well. Above all, there is sadness at the suffering of the victims and at the decisions made by church leaders that not only denied these victims justice, but continued to expose others to harm and exploitation. There is disgust. For younger millennial Catholics, the sex-abuse crisis of the early 2000s was more history than lived reality; the current crisis is a jarring, difficult, and sometimes nauseating experience to many.

There is a need for prayer, but also action. Maintaining what little credibility the church has among millennials depends on it.
sharetweet

There is despair. Some young people are certainly experiencing a spiritual or existential crisis, as they try to come to grips with the evil that people who are charged with emulating Jesus Christ are capable of inflicting. Those of us with young children who are resolved to stay in the church are left wondering how we can possibly keep our children Catholic as they grow up. Those with older children are scrambling to figure out what they could possibly say to them. How can you explain something like this when it leaves you speechless?

Among millennial Catholics, there seems to be a strong sense that this must be a turning point, that this must mark the beginning of a new era of transparency and accountability. Calls for reform are being articulated by young Catholics with all different types of worldviews and backgrounds. In the highly polarized U.S. church, where partisan affiliation and political ideology often matter more than the demands of the faith, this deserves attention.

Some have called for the construction of new boards to oversee claims of sexual abuse, led by members of the laity rather than clergy. Others have called for a nationwide investigation of all crimes and cover-ups, urging all dioceses to release this information now rather than waiting for civil authorities to uncover it. There have been calls for financial boycotts or letter-writing campaigns to pressure dioceses to respond.

There are calls for Pope Francis to intervene and for all the bishops in the United States to offer their resignations, giving Francis an easy path to remove from office those who have failed to protect the vulnerable, as happened after revelations of sexual abuse in the Chilean church.

The release of the grand-jury report in particular has also led many to reflect on what type of bishops young people want to see. Francis has said he wants priests that are shepherds who smell of the sheep and favors bishops who are known for their pastoral approach. There have been renewed calls for precisely this type of leadership. The perception that bishops behave like corporate executives using slick public-relations techniques to protect their own interests is generating a tremendous backlash.

Of course, looking to the pope for leadership and action may be on hold at the moment, while journalists explore former nuncio Archbishop Carlo Maria Viganò’s allegation that the pope knew about McCarrick’s predatory behavior and nevertheless removed the (secret, unenforced) sanctions that were allegedly placed on McCarrick by Pope Benedict XVI. While those who seem to welcome a Catholic civil war clamor for the pope’s resignation, prior to the release of any concrete evidence, millennial Catholics seem willing to wait and see if anything corroborates this allegation—neither assuming the pope has done nothing wrong nor automatically trusting Archbishop Viganò, who in the past has spread conspiracy theories, reportedly quashed a sexual abuse investigation, and consistently pushed his right-wing agenda.

The millennial Catholics who are carefully watching the responses of church hierarchy have defied the “rise of nones,” the rapid abandonment of organized religion among Americans during recent decades. They show up to Mass because they care; their faith is not merely a cultural inheritance, but is in many ways chosen. They know the status quo must change. There is a need for prayer, but also action. Maintaining what little credibility the church has among millennials depends on it.

Catholics, millennial or not, must remember that the church is more than the hierarchy. It is the People of God. All Catholics can bear witness to the best of their faith by living it authentically—fathers and mothers caring for their children and sons and daughters caring for infirm parents, workers at Catholic Charities and Catholic Relief Services helping to lift up the poor, pro-life and environmental activists fighting for human dignity, teachers carefully explaining the faith to a new generation, and countless others trying to follow Christ in their daily lives. And we can all be there for the survivors of sexual abuse, working for a church and society that better protects children and anyone else who might be exploited or harmed. The temptation to wallow in despair remains, but the call to build a better church is more important now than ever.

Robert Christian is the editor of Millennial, an online periodical by millennial Catholics on religion, politics, and culture.