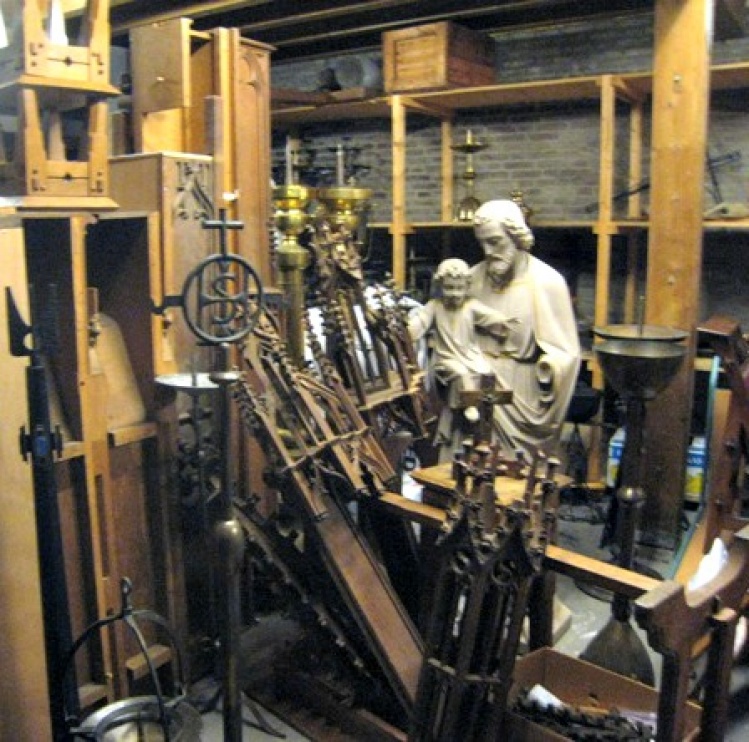 Catholicism is quickly fading from the crowded cities and flat countryside of the Netherlands. While still the country’s largest faith, it’s in retreat as secularization, the sexual-abuse crisis, and lay discontent with the hierarchy take their toll on once-solid parishes. No matter what the indicator—totals of priests, nuns, baptized Catholics, regular churchgoers, religious weddings or funerals—almost all trends point downward.

The latest sign of the faith’s steep decline came in early December when Dutch bishops made their every-five-years ad limina visit to the Vatican. Outlining this “long-term shrinking process,” as their official report called it, bishops conference chairman Cardinal Willem Eijk told Pope Francis the overall number of churches was also falling fast. “We foresee that a third of the Catholic churches in our country will be closed by 2020 and two-thirds by 2025,” he told the pope.

Catholic and Protestant churches have been shutting down at the combined rate of about two per week for several years. The Catholic Church is now stepping up the pace with a plan to regroup the fifteen hundred parishes that existed in 2003 into two hundred large units by 2017. Deconsecrated churches have been sold and turned into everything from apartments and pubs to bookshops and health centers. Others have simply been torn down. But either way, the “sacred surplus” they leave behind—such as chalices, vestments, statues, and pews that no longer have any use—is piling up in the storerooms and basements of church buildings around the country.

The problem is acute in the Netherlands because its churches receive no support from the state. In most other European countries, direct or hidden subsidies help keep church buildings open even if their congregations cannot maintain them.

A small network of Dutch art specialists began ringing the alarm bells about five years ago. They helped parishes draw up inventories of their sacred holdings, and some rare pieces went to museums. But most surplus items were workaday church fixtures with no great value outside the liturgy. Reluctant to simply destroy them, the experts began to send the objects to parishes in places where the church is expanding rather than shrinking. Soon Dutch church art was turning up in Africa, Latin America, and Asia.

“If an object was made to be used in the liturgy, I want to keep it in the liturgy,” said Eugene van Deutekom, director of the Museum of Religious Art in Uden, near ’s-Hertogenbosch in the southern Netherlands. “This is a way to give a second life to these objects.”

Evelyn Verheggen, an art historian in the Rotterdam diocese, also spoke in terms of keeping a tradition alive. “When you give an object to another church, or a church in another country, it’s like someone donating a heart or another organ,” she said.

Over the past few years, Dutch church art has begun popping up in unexpected places. Most pieces are sent by individual parishes or dioceses, without any central coordination. Some experts team up to meet a request, as van Deutekom and Verheggen did to send three shipping containers full of statues, an altar, a church bell, a lectern, and even rows of well-worn pews to a cathedral and church in the Dominican Republic.

Dutch monstrances have ended up in convents in Egypt and Argentina. Once word of the recycling drive got out, parishes in several African countries sought chalices, ciboria, and vestments. A parish in Brazil asked for an organ, while one in Indonesia said it had an empty building that could take just about everything a church would need. Requests have even come from Italy, where there surely is no shortage of Catholic art. Some needy parishes in southern Italy have received chalices and monstrances.

The revival of Christianity in the former communist countries has meant rising demand there as well. A Ukrainian church building used as a gas-mask factory for decades has been refurbished with pews, statues, and crucifixes from a church near Eindhoven. Churches in the Baltics ask for old-fashioned vestments only very traditionalist priests would wear in the West today.

Orthodox churches are keen on relics to adorn crosses and other pieces of church art. “They don’t often ask for relics of this or that saint,” van Deutekom said. “They just ask for relics by the kilo.” Their only proviso, he added, was that the relics had to come from before the Great Schism of 1054. Some old chalices also have medallions embedded in their base, and these too have to be more than a millennium old if the piece is to go to an Orthodox church.

Priests visiting Dutch dioceses from far-off places sometimes ask for chalices and other sacred vessels by the kilo too, but for a different reason. With silver selling at about $600 and gold at about $40,000 per kilo, the Dutch have to be especially careful their sacred art isn’t melted down for the metal.

In one diocese recently, a secretary was about to give two chalices to a priest taking them to Africa when the bishop arrived and spotted him as a con man. In another diocese, a new lay member of the parish council took a monstrance to be appraised and never came back. He was caught when he tried to sell its diamonds to a jewelry dealer.

An Augustinian monastery in Eindhoven has about one hundred fifty chalices in storage. “I could send them all to Africa and Eastern Europe in twenty-four hours if I didn’t check whether the people taking them are serious,” van Deutekom said. To avoid thieves, he usually asks for a donation equal to the value of the precious metal in an object. Most parishes can find a donor to pay the price, he said, and the proceeds help send items to churches that cannot afford the shipping fees. By paying $3,500 for a chalice for their son’s ordination, a Dutch couple made it possible for van Deutekom to restore and donate six more chalices to the churches he’s already supplied in the Dominican Republic.

Another condition is that people receiving surplus church goods must use them for religious purposes. A Dutch parish that did not demand this sold used pews to a local farmer, only to see them used as fences.

Despite their successes, the recycling efforts will still not absorb the huge wave of sacred art to be removed from Dutch churches in the coming years. In addition, many Dutch families have swamped Uden’s Museum of Religious Art and the Catharijneconvent, another large religious art museum in Utrecht, with statues and crucifixes from the homes of their deceased parents. Much of it is little more than Catholic kitsch. “We hardly accept anything at all now,” said Utrecht curator Marc de Beyer. “We already have most of the objects that are being offered.”

But what should they do with a Jesus statue with blond hair and blue eyes, or with garishly overdone paintings? “They’re popular in some places, but I feel it’s a kind of cultural colonialism to send them sacred art we’re embarrassed by,” said van Deutekom. Dutch priests prefer modern liturgical styles, which means he’s collected racks full of old-fashioned vestments, but there’s still demand for them. “If you have old black-and-gold vestments, just send them to the Baltics,” he said. One guiding principle is to avoid sending objects that are too far removed from a country’s culture. “I got a request from Indonesia for a chalice recently. I tried to find one that was modern, not neo-Gothic.”

While the work seems like that of an antiques dealer, van Deutekom says the religious angle makes it special for him. “I’m not a fine arts dealer. My interest is not in the economic value of an object, but its devotional value,” he said. “We are one religious family and families share what they have.”

Tom Heneghan is the Paris-based religion editor for Reuters. He is the author of Unchained Eagle: Germany after the Wall (Pearson Education).

At a Loss for Words