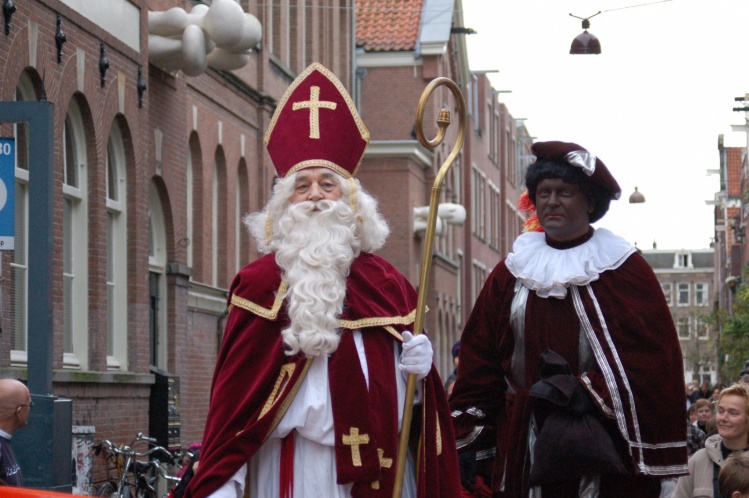 [This story was updated December 5 to reflect developments since it was originally posted; see below.]

For all its brilliant, hypermodern buildings and splendid infrastructure of communication and transportation, Holland still always strikes me as being an old-fashioned country. Kids walk or bike to school, play soccer in the street, and run freely in the neighborhoods. People know their neighbors. Parents work forty hours, not sixty; one job, not two; and they never pass on a vacation. Multigenerational family gatherings are common. Often it feels like I’m back in some America of the 1950s.

At no time of year is this feeling stronger than in mid-November, when St. Nicholas arrives for his annual three-week visit. For whereas in my native land Santa Claus arrives by air, here Sinterklaas comes by steamboat, from Spain. Once docked, he proceeds by horse. Instead of efficiently dropping his gifts in one fell swoop, he deposits them one at a time in shoes set out in anticipation of his arrival (albeit Nikes and not wooden ones). Even the look of the man is old-fashioned, which makes sense since he is old – 1,734 years old, to be exact – and he’s a bishop (see the crozier and miter), which makes him a guardian of tradition.

All well and good. Every land has its traditions, and here in the Netherlands I particularly value how the Sinterklaas tradition, which wraps up with the distribution of the last gifts on December 5, separates the commercial frenzy of gift-giving from Christmas itself, which remains a quieter religious and family celebration. Having said that, I am also aware that traditions may sustain mindsets and habits that are not necessarily benign. Which brings me to the recent controversy surrounding the role of St. Nicholas’ black assistant, “Black Peter,” or Zwarte Piet in the Sinterklaas tradition. At stake for the Dutch are memories of celebrations past, a nation’s pride, and standards of inclusion and kindness.

Igniting the current round of controversy was the critique voiced a year ago by Verene Shepherd, a Jamaican social historian and consultant to the United Nations. Shepherd called Zwarte Piet an emblem of racism and the Sinterklaas tradition a return to slavery in the twenty-first century. Though she wasn’t speaking on behalf of the United Nations, the first reports in Holland played up her association with that body, which enjoys great prestige in this internationally minded country. Was the UN calling the Netherlands a racist country? In any case, the remarks brought to a boil a discussion that had been simmering for more than fifty years. Doubts about the role of Zwarte Piet have been voiced off and on since the 1960s, prominent among them objections from some within the Dutch-Surinamese community in 1981, and a movement to change Zwarte Piet’s color in the mid-‘90s. New to the Sinterklaas celebrations of 2013 and 2014 has been the volatility of the discussion and strong signs of imminent change.

I must admit, when I first visited Holland twenty-five years ago, I was surprised to see what the Dutch took for granted: men and women in blackface accompanying St. Nicholas everywhere he went. To me this was old-fashioned in a dubious way. Blackface was something I associated with minstrel shows and lawn jockeys, things that in the U.S. were understood to perpetuate racial stereotypes and social inequality. But when I talked to people here, I learned that they saw it as just the opposite. No one was more beloved, they said, than Zwarte Piet, the omnipresent giver of cookies, candies, and gifts. Far from being a lowly servant (or slave?), he was sharper and funnier than stodgy St. Nicholas. What more positive image of a black person, I was asked, could a child have?

But I remained skeptical, in part because the Dutch themselves have shown by their own modifications of the appearance of Zwarte Piet that not all aspects of the tradition are acceptable. Some decades back Zwarte Piet typically had pronounced lips and wore golden earrings. Those features have largely disappeared from his more contemporary getup. For the most part, I have reserved judgment, primarily because I find Dutch society on the whole to be inclusive and tolerant and actively opposed to racism, sexism, and other forms of discrimination. Moreover, with regard specifically to Zwarte Piet, I have more than once heard black people from the former Dutch colonies of Surinam and the Netherlands Antilles voice support for the tradition. Clearly, much depends on how the story is told. While there are multiple explanations of Zwarte Piet’s accompaniment of Sinterklaas, one version (the one told in Surinam) has St. Nicholas, the patron saint of mariners, traveling with people he has rescued from slavery. In this light, those who work with him to distribute gift are symbols of freedom rather than of enslavement. Another story avoids the racial storyline altogether, saying that Zwarte Piet is not a Moor or an ex-slave, but one who is black from the soot of the chimneys he has descended while bringing presents.

In any case, with the world watching, the Dutch have scrambled to address the question, and those pressing for change – a loose coalition of activists of mixed ethnicity – have been emboldened. Tensions ran especially high in the week before St. Nicholas’ scheduled arrival in Holland, in Gouda on November 15. Coverage of this national event has in recent years been handled by Dutch television’s Sinterklaasjournal, a daily update for children of Sinterklaas’s and Zwarte Piet’s progress toward and within Holland. This year the program was equally popular with adults, who were eager to see how the Zwarte Piet question would be addressed. There were rumors that Sinterklaas would show up with Piets of various colors, or with rainbow-striped Piets. My own children, now eleven and fifteen, scoffed at the latter idea. Wouldn’t Rainbow Piets be a new form of discrimination, against homosexuals? Having only happy associations with Zwarte Piet, they saw no need to change the tradition.

Once the boat docked, we had our answer. St. Nicholas ventured forth together with old-style Black Piets and with new-style Cheese Piets, Stroopwafel (syrup waffle) Piets, and Clown Piets. (Soot Piets – Piets whose white faces are partially covered in charcoal – have also since been sighted.) On TV the whole thing went smoothly, but off-camera the festivities were marred by skirmishes between defenders and opponents of the tradition. Ninety people were arrested for disturbing the peace or demonstrating without a proper permit. Sadly, the clashes and arrests took place before the eyes of a very large number of children, even as Sinterklaas was speaking to them.

Since then things have quieted down, but clearly St. Nicholas has his work cut out for him in the days ahead. Confusion, hurt feelings, hard feelings, and worries persist. Whether Zwarte Piet will go into permanent retirement remains an open question, but I think the strongest signal was already sent prior to St. Nicholas’s arrival, when the nation’s largest grocery chain, Albert Heijn, removed images of Zwarte Piet from its products and advertising. Other major retailers have since done the same.

The prevailing feeling in these last days before Sinterklaas departs – among adults at least; the children are glad to get treats from any Piet who wants to give them – is a mix of nostalgia and mild embarrassment. The nostalgia is for a time that never was, when traditions were indestructible and forever. The embarrassment is the kind you feel when you’ve caused injury unintentionally. While protesting you didn’t mean to offend, you suspect that maybe you should have known better.

Update (December 5)
On December 4, the final episode of this year’s Sinterklaasjournaal showed just how much the Dutch Sinterklaas tradition is in flux. Not only did the Piets vary in their appearance this year; St. Nicholas did as well. Shortly before pakjesavond (December 5, when the kids get most of their gifts), the tasks of an exhausted St. Nicholas were taken over by black(faced) Opa Piet (Grandpa Piet), who donned a red miter and cope.  St. Nicholas recovered in time for the final delivery of gifts, but the closing scene of the series showed the two of them riding off into the night together, with St. Nicholas on a black horse and his black companion (in Sinterklaas garb) riding Sinterklaas’s white horse. If the series had an overriding message this year, it was the one stated in both the first and last episode: the tradition must remain “ouderwets gezellig.” "Ouderwets" means "old-fashioned." "Gezellig" is an untranslatable, very Dutch word that combines notions of coziness, harmony, and fun. In short, the essence of the tradition lies in the joy shared: that’s the part that must be kept.
Tags
Foreign Affairs
Web Exclusive