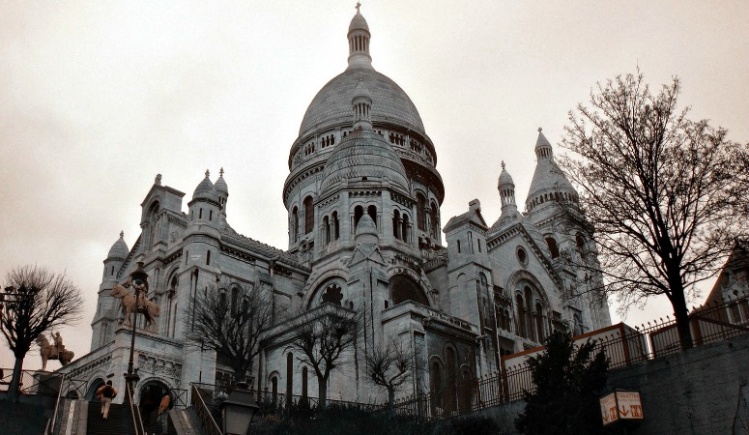 The spell cast by France on American visitors is a familiar literary set piece. F. Scott Fitzgerald, Ernest Hemingway, and Langston Hughes wrote the defining accounts in the 1920s, implicitly contrasting Parisian bookshops, fine wine, and sidewalk cafés with small town mores in the Prohibition-era United States. The Library of America recently felt compelled to publish an anthology, Americans in Paris, edited by New Yorker writer Adam Gopnik, whose own sparkling account of his family’s sojourn, Paris to the Moon, is a worthy addition to this expatriate canon.

Americans in Paris unreflectively took the republican side in the cultural struggle that followed the French Revolution, defining much of modern French history between civil servants desiring to lead a unified nation state and priests and nuns determined to define France as the “eldest daughter of the church.” The remembered France of Gopnik’s Americans included jazz clubs in Montmarte, but not Montmarte’s largest building, the Basilica of Sacré-Coeur, constructed by Catholics grieving the nation’s defeat by Prussia in 1871 and the murder of their archbishop at the hands of the Paris Commune. The effect of the Louvre on bedazzled American tourists was detailed. The effect of Lourdes on bedazzled American Catholic pilgrims was not.

The struggle between republicans and Catholics in France culminated in the early twentieth century as governmental officials implemented a strict version of laïcité, or the separation of religion from the state. This separation included an abrupt end to state funding of religious institutions and schools, but also limitations on what would seem to Americans basic freedoms. In 1901, for example, the government banned Catholic religious orders such as the Jesuits from operating in France for a time, because of their perceived loyalty to Rome, as opposed to the nation, and their potential influence over young people in schools.

Paradoxically, these skirmishes over religion expanded French influence across the globe, as government officials and Catholic missionaries competed with each other to inculcate French (or Catholic) values. The mission civilisatrice promoted by French civil servants resulted in schoolchildren from Madagascar to Guyana reading Molière and learning about the liberté brought about by the French Revolution. Alternatively, my own university, Notre Dame, like many other Catholic institutions, was founded by missionary French priests and brothers for whom the trauma of the anticlerical phase of the revolution was an abiding warning against the dangers of modernity.

This French version of the culture wars ended with the Second World War. One version of conservative Catholicism was discredited in the war by its alliance with the collaborationist and anti-Semitic Vichy regime. Postwar French leaders declined to refight past battles, and a new generation of Catholic politicians played a larger role in both French politics and the nascent European Union. Most important, declining levels of Catholic practice made questions about the integration of religious institutions into society less pressing. The archbishop of Paris termed the city “mission territory” as early as 1947, and he sent priest sociologists to Chicago to marvel at bustling Catholic parishes and schools. Sophisticated French theologians had a major influence on the Second Vatican Council, but active Catholics had already become a minority—and, depending on the region, often a tiny minority—within a fundamentally secular society.

Unfortunately, culture wars connected to religion have returned in a different, more ominous key, most notably with the massacre of 130 concertgoers and diners in Paris last November, by French-born Islamic militants. This attack occurred eleven months after the murder of staff members at the satirical magazine Charlie Hebdo, again by Islamic militants raised in France. The editor of Charlie Hebdo, whose cover stories mocking Islam had infuriated the militants, had once been quoted, in a nod to France’s religious history, as saying, “We need to make Islam in France as banal as Catholicism.”

IN THIS CONTEXT two new books are especially welcome. The first, How the French Think, is by Sudhir Hazareesingh, an Oxford historian who is a frequent reviewer for the Times Literary Supplement and the author of two books on Napoleon. Raised in Mauritius, a onetime French colony, and educated on what he terms “a copious diet of French classics,” Hazareesingh now lives in Paris part of each year.

The second, David Bell’s Shadows of Revolution, is a collection of lucid and insightful review essays on an enviably wide range of topics within French history and culture. Bell is a Princeton historian who became intoxicated by France after college and never quite left. During his first year in Paris, studying at the École Normale Superiore, he stalked local cheese and wine shops, gaining fifteen pounds, and not regretting “a single ounce.” He has also authored a biography of Napoleon—the topic is apparently irresistible—and other important studies, including a riveting history of the Napoleonic wars.

Hazareesingh deftly moves from Rousseau to the opinion pages of today’s Parisian newspapers.  His central conceit is an affirmative answer to a simple question: Do nations think?

It is hard to imagine answering “yes” if the question were posed about the United States. Do Marilynne Robinson, Ta-Nehisi Coates, and Francis Fukuyama “think” together? But Hazaree-singh convincingly argues that certain preoccupations constitute a coherent French intellectual tradition. These preoccupations include a focus on science, less in the laboratory than in the idea that a technocratic elite can direct governmental affairs in a disinterested way. They also include a spiritualism related to France’s Catholic heritage but distinct from it, a valorization of the countryside, not Paris, as the deepest source of French identity, and an enduring interest in philosophical argument.

This summary inadequately conveys Hazareesingh’s achievement. What in other hands might become a tedious march through texts and authors becomes in his a witty, even bemused, probe into the underpinnings of French culture.

These underpinnings include what anthropologists term a face-to-face milieu. All nations with universalist aspirations elide their provincialisms but the elision in the French instance is nonetheless striking. Most French intellectuals read the same journals, watch the same (erudite) talk shows, live in the same Parisian neighborhoods, and bump into each other while grocery shopping or out for dinner.

Bell notes how one of France’s most prominent historians, Pierre Nora, simultaneously taught at the country’s leading graduate school, edited an important newspaper, and selected titles for publication at the country’s most prestigious publishing house. This tightly bound milieu, Bell suggests, fosters a welcome intensity of conversation, but with some deleterious consequences. Scholars such as Nora, for example, have been uninterested in the history of immigration, and what that might mean for the ideal of a unitary French culture. For instance, immigration from Poland and Italy in the early twentieth century, and from former colonies after the war, is one of the central phenomena of modern French history. One in four French citizens has at least one grandparent born outside of France, but the Statue of Liberty, designed and constructed in France, became a symbol for the “huddled masses” of immigrants only once it was placed in New York Harbor.

Hazareesingh ends by remarking on the decline of French influence. If Jean-Paul Sartre and Michel Foucault were once known throughout the intellectual world, their successors have modest visibility outside of France. The need to work within the balky structures of the European Union constrains even the most activist governmental ministers, and the inability to generate homegrown versions of Google and Facebook makes France ever more vulnerable to the global economy. Even the language itself seems under threat, struggling to sustain its influence in comparison to English, most of all, but also Spanish and Chinese. Fewer French-language books are translated into English than a generation ago. Another French historian, Marc Fumaroli, himself, like Nora, one of the forty members of the famed Académie Française, recently authored a book on eighteenth-century figures ranging from Benjamin Franklin to Frederick the Great, with the elegiac title, When the World Spoke French.

THIS FOCUS on unity within French culture feeds into the current crisis. France’s religious history, with a state determined to limit the influence of a Catholicism perceived as excessively hierarchical and insufficiently nationalist, ill-positioned the French to absorb the Islam that often accompanied immigrants from the Middle East and Africa in the 1960s and 1970s. The physical isolation of these immigrants in suburbs and housing projects outside of Paris and other major cities naturally incubated alienation. Recent laws limiting the ability of Muslim young women to wear veils in public schools suggest an inability to cultivate a French multiculturalism, or at least a patriotism capable of working through religious institutions instead of in spite of them. The populist National Front Party, at its origin in the early 1970s loosely associated with some conservative Catholics, now loudly proclaims the virtues of laïcité in the face of the growing Muslim population.

Still, the attackers in Paris did not become terrorists because of nineteenth-century battles over church and state. Online sermons and trips to Saudi Arabia or Syria seem to radicalize young Muslims in San Bernardino, not just Paris. A major American political figure, Donald Trump, now advocates an end to Muslim immigration to the United States, and refugees from the Middle East are causing political upheaval across central Europe. Paris’s status as terrorist target may rest less on specific religious tensions within France than its iconic status as a symbol of Western modernity and one of the world’s great tourist destinations. Bell sent his essay collection off to the publisher before the November attacks but his compelling final assessment is that terrorist assaults are part of the “broader story of the West’s troubled relationship with the global South, and with the Muslim world in particular.” France’s influence in global markets and global culture may be waning, but in this discouraging sense France’s problems are becoming ours.