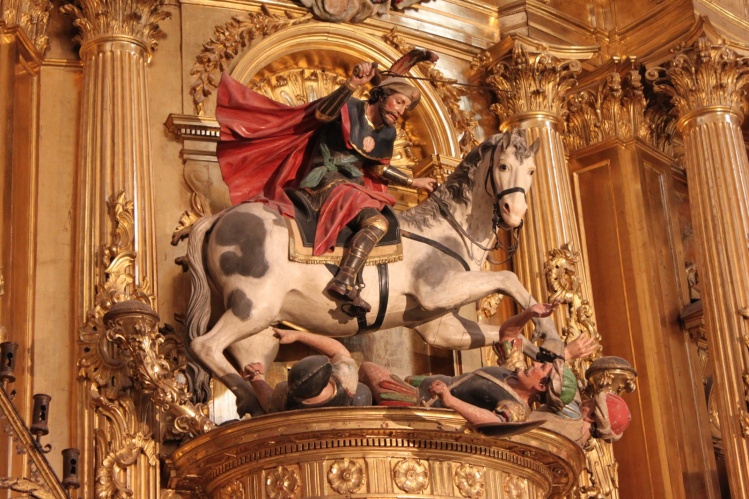 Altarpiece of the Chapel of St. John the Baptist and St. James “the Moor-slayer” at the Cathedral of Burgos

Halfway through my solo pilgrimage from Le Puy-en-Velay, France, to Santiago de Compostela, Spain, I stared down at the tomb of the Cid, a war hero best remembered as the subject of a twelfth-century epic poem celebrating the expulsion of the Muslims from the region. His remains were enshrined at the heart of the Burgos Cathedral. Not far off, a statue of St. James the Greater, the apostle of Jesus, trampled Moors under his horse while pointing a sword at their heads.

I had decided against the conventional study-abroad semester to devote three months to a pilgrimage, hoping to find my way to gentleness in a world of violence. But what I learned about the history of the Camino, with all its memorials of the “reconquest” of Spain by Christianity, did not seem to point to gentleness. Bishops in the eleventh century marketed the pilgrimage route partially as a celebration of the expulsion of the Moors from northern Spain and southern France. The figures of the Cid and St. James as Matamoros—“Moor-slayer”—came to stand at the center of that vision, as evidenced in passages of the oldest pilgrim guide to the Camino, the twelfth-century Codex Calixtinus. In Latin America, early conquistadores also invoked St. James as the Mataindios—Indian-slayer. No simple apostle of a crucified Jesus, James was to them a conqueror, a man who would not so much convert the natives as vanquish their unbelief.

As the Obama administration sent war planes to combat ISIS and fellow pilgrims confessed their distrust of dark-bearded men, I stared into the face of St. James the Matamoros, seeing in the rising tide of modern religious conflict a connection to twelve centuries of mythologized conquest. The residue of a holy war still seemed to pervade the route. How, I wondered, had I come to think that I would find solace on a route marked by swords?

How had I come to think that I would find solace on a route marked by swords?
sharetweet

And yet, ironically, I found the greatest antidote to religious hatred and aggression on the same route. The Camino’s history was not only one of conquest, but of long centuries of service and hospitality. Nuns, priests, monks, and lay hostel managers humbly served the pilgrims, the strangers passing through their villages in varying states of health and strength, welcoming them each day to Masses and vespers, meals and beds. Today, on the route of religious conquest, in the heart of the West, the modern sentinels of St. James offer bread and lodging as they have done quietly through the ages. Pilgrims, walking on routes of penance toward a deeper relationship with God, the source of love, have long stared into the face of a different St. James.

As the legend goes, James journeyed to northwestern Spain to proclaim the Gospel and, upon his return to Jerusalem, was beheaded by Herod Agrippa. His disciples took his body back to Spain and buried it, where it was discovered in the ninth century. This St. James, the pilgrim, carries a staff and a scallop shell—the symbol of the pilgrimage—and wears a simple brown smock. He is often seen as a statue, lying on a public bench outside a church, fatigued and covered in scrapes. His is unmistakably the face of a refugee, a suffering stranger.

I wish I could say that love has won on the Camino, but I think that would be too simplistic. Rather, the Camino is an outer manifestation of the inner struggle against harshness and toward the love of God. It is an increasingly ecumenical route, welcoming pilgrims of varying commitments to Christianity and other religious backgrounds. The face of the suffering stranger, the pilgrim in search of love, has broadened. And the challenge for pilgrims is to love and trust the other suffering strangers.

Every day, I remember a woman in León. Leaving the one luxury accommodation I had used on the route as respite from over a month of knee problems, I stepped back out onto the streets, alone again with my aching joints. A statue of St. James the suffering pilgrim sat in front of me. A woman crossed between me and the statue and placed her hand on his head—blessing James, blessing me, and blessing all the wanderers of the earth searching for gentleness. Perhaps the blessing that is most difficult to give and receive is the blessing of St. James the suffering pilgrim: a blessing of one’s weakness and pain in a world of violence.

Rebecca Collins is an editorial intern at Commonweal.