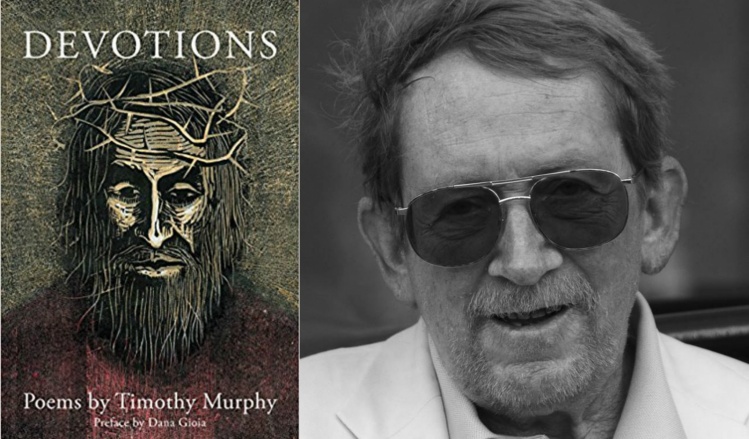 The poet Timothy Murphy’s new collection, Devotions, begins with a trip to Disenchantment Bay, Alaska. There, the speaker and his companion witness the calving of a glacier: “Crack! A blue serac tottered and gave. / Stunned at the water’s edge, / we fled our vantage ledge / like oystercatchers skittering from a wave.” Once he’s scurried to safety, the speaker’s mind momentarily wanders, as the poem closes with different kinds of breakage, other forms of detachment:

Now separation has become my fear.
What was does not console,
what is, is past control—
the disembodiment that looms so near.

Detachment? So an ice cliff by the sea
calves with a seismic crash
of bergy bits and brash,
choking a waterway with its debris.

We clear the neap tide beach of glacial wrack,
pace and mark the ground,
then wave the Cessna round.
Pilot, we bank on you to bear us back.

As is so frequently the case in this book, the surface simplicity of “Disenchantment Bay” belies a deeper complexity. One of the obvious pleasures the poem offers lies in its precise natural description. Murphy knows his surroundings, and this knowledge makes itself felt in the technical language—the “neap tide” and “bergy bits”—that so effortlessly floats in and out of the poem. “Disenchantment Bay” is also a lovely piece of poetic music, with the alliterations of “bergy bits and brash” picked up again in “bank on you to bear us back,” with the play between long and short “a” sounds in “glacial wrack,” “pace and mark.” Murphy often uses regular rhyme and meter—he’s a formalist’s formalist, a protégé of the late Richard Wilbur—and his poems are a joy to read out loud and listen to, as we savor the glacier’s cracking made audible in “calves” and “crash,” “wrack” and “back.”

Most movingly, though, “Disenchantment Bay” becomes in its last moments a meditation on death and mourning, which Murphy describes here as “the disembodiment that looms so near.” Devotions is a deeply elegiac collection, and there’s hardly a better description of the elegist’s challenge, or the mourner’s suffering, than these lines: “What was does not console, / what is, is past control.” To mourn is to know the painful difference between was and is, and to know that the consolations offered—in the form of prayer, in the form of poetry—can soothe but never completely salve death’s wounds.

Indeed, death permeates Devotions, from its first poem to its last line: “Remember, we are clay.” Murphy was recently diagnosed with stage-IV cancer. Like the serac, Murphy must strive for a kind of detachment—a more difficult task for him than for the ice. (Note the question mark that comes after this word in “Disenchantment Bay”: it’s as if the speaker can’t believe that such a thing is possible in the face of such looming loss.) Separation, from the life of hunting and eating and cooking and writing that Murphy loves, has become his fear.

If this is a death-haunted collection, it’s also a deeply Catholic collection, and the last lines of this first poem offer some hope
sharetweet

If this is a death-haunted collection, it’s also a deeply Catholic collection, and the last lines of this first poem offer some hope. The pilot here flies Murphy away from danger in his Cessna plane. In the rest of Devotions, though, the pilot who bears us on his back is Christ. Murphy was raised Catholic and fell away from the church when he was young, in large part because of the church’s sexual doctrines. (Murphy is himself gay.) In 2004, though, he came back. As he puts it in “The Sea of Faith,” a poem whose title and first line come from Matthew Arnold’s doubt-filled poem “Dover Beach,” “Like Jonah I was vomited ashore; / now every night a spring tide runs for me.” In rite and ritual, word and sacrament, the Catholic faith offers Murphy a way to understand, and make meaningful, his fear and suffering.

The central death of Devotions, though, isn’t Murphy’s own, the one he’s moving toward. Rather, it’s one he’s already experienced: the 2010 death of his longtime partner, the translator Alan Sullivan. Sullivan’s death enters into many of the poems here. “Interment” begins with life, with a lovers’ meeting:

One boy with a guitar and dreadful novel,
another, poems crammed inside his head—
one led the other to his basement hovel
and slung the slender stranger into bed.
And it ends, beautifully and sadly, with death and remembrance:
I delve a deep hole in the orchard soil,
singing my lover’s favorite Latin song,
Tantum Ergo. The digging is no toil.
My friend? Let me pretend he did no wrong.

From the bed in the basement to the bed in the soil, from the guitar to the Latin song, the echoes between beginning and end are lightly done, movingly remembered. Here, what was—the “dogs to be fed and watered,” “the manuscripts of poems to be crafted”—does offer some consolation, even if it’s an imperfect one. (And we sense that the future tense of those memories, that time when dogs and poems were things still to be cared for, both comforts and wounds.)

Sullivan is hardly the only soul Murphy has lost, and he’s not the only one he mourns and celebrates in Devotions. “Purgatory” begins with Murphy imagining his own death, in the Latin of the church (“Dignum et justum est: that Murphy stay / in Purgatory until the Judgment Day”), but then moves on to other friends, fellow-poets, who have gone before him: “I have friends to see / who knew not God but tutored me, / Mezey and Hecht, expert in prosody, / urging me on when I gang aft agley.” He writes in remembrance of Frederick Ress, a friend and talented tenor “who took his life rather than face / Parkinson’s” but who Murphy sees now singing a new song: “His soul is freed / to sing for supper in a better place.” Murphy mourns priests and fathers and friends, fellow-believers and those, like the aforementioned poet Anthony Hecht, whom he prays to meet again: “Each night I plead again, / ‘Let them behold your face, / love them with your elect.’ / I pray for Anthony Hecht. / Lord, hear my prayer.”

With so much death, it may be surprising to learn that one emerges from Murphy’s book with a renewed sense for life. Indeed, his poems are filled with life: verbal life, animal life, natural life, social life. Murphy lives and hunts in North Dakota, and the two, living and hunting, are deeply connected in this book. To live for Murphy is to hunt, and to hunt is to live. In “Missing Mass,” Murphy describes skipping out on the Eucharist, instead “going to church afield,” with his “faithful altar dog” at his side. The vast landscape transforms, suddenly and wondrously, into a sacred space: “A gale sweeps through the choir / and dries the prostrate grass / lightning and prairie fire / forge to beaten grass.” In “Checklist,” Murphy names the things that make the trip so pleasurable for him and his dog: “Cheetos and chocolate chips for Tim to nibble, / a shrink-wrapped pound of Jimmy’s jerkied deer, / a six-pack of nonalcoholic beer, / for Feeney’s sake a Ziplock bag of kibble.” (Murphy struggled with drink for years, and it’s a regular topic in his poetry.)

I don’t hunt myself, but I do love my cats, so I get Murphy’s reverence for his dog: “The Father taketh and the Spirit giveth, / but me? I know that my Retriever liveth.” As these lines indicate, Murphy can be witty, or even silly; he can also be quite serious, even theological: “Sex led me to love; / love bound me to God.” He’s also a great friend, and one of the things these poems are most devoted to is communion with others (one of the many ways in which Murphy is an essentially Catholic poet). We hear about his friendships with poets and priests, of meals he has loved and the poetry, including that of Wilbur, that he cherishes: “I stand athwart this mossy, rocky bed, / revolving in my sunrise revery / quatrains I hold in memory / from the best sermon I have ever read.” Death is so painful because Murphy loves life so much.

And yet we’re all moving toward death; Murphy is only moving more quickly than most, and he knows it. This knowledge can’t help but haunt the final words of “The Chase”:

The prairie is a poem rarely read.
Its looseleaf pages blow.
Too many students of this landscape fled
its poverty and snow.
Today I limp on stiffening knees,
hoping that heedless pheasants take their ease

in pigeon grasses sprung from durum stubble,
in fragrant cedar shadow
where a boy watched his father down a double.
Maker of marsh and meadow,
grant me more time to understand,
more years to walk and memorize this land.

Murphy loves the marsh and the meadow, the pheasants and the prairie. These poems are a most powerful act of devotion.