Arming the Flock, and Everyone Else
By E. J. Dionne Jr.
Columnists
Domestic Affairs 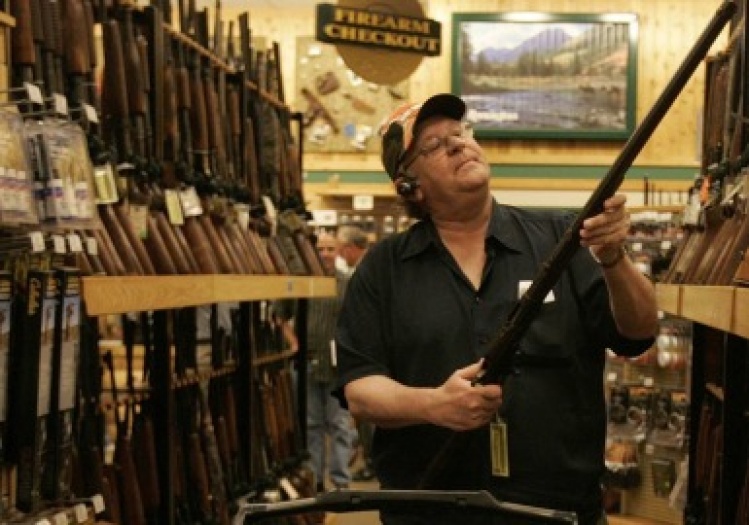 Have we gone stark raving mad?

The question is brought to mind by the new gun law signed last week in Georgia by Gov. Nathan Deal. You might have thought that since the United States couldn’t possibly have more permissive firearms laws than it does now, nothing more could be done to coddle the gun lobby and tip the balance of our statutes away from law enforcement. Alas, you would be wrong.

The creativity of the National Rifle Association and other organizations devoted to establishing conditions in which every man, woman, and child in our nation will have to be armed is awe-inspiring. Where imagination is concerned, the best absurdist artists and writers have nothing on the NRA. No wonder Stephen Colbert has decided to move on from the realm of satire. When parody becomes reality, the challenges facing even a comedian of his talents can become insurmountable.

You might not have thought that the inability of people to pack while praying was a big problem. Georgia’s political leaders think otherwise, so the new law allows people to carry guns in their houses of worship. True, congregations can set their own rules, but some pastors wonder about the confusion this provision will create, and those who would keep their sanctuaries gun-free may worry about being branded as liberal elitists. Maybe the Georgia Legislature will help them by requiring a rewrite of the Scriptures. “Blessed are the peacemakers” can become “Blessed are the gun owners.”

You will also be able to tote weapons into bars and their parking facilities if the bar grants you permission. I can’t wait to see the next beer ad depicting a gunfight over who pays for the next round.

Georgia thinks you should be able to take guns into government buildings that don’t have screening devices or security guards. Second Amendment enthusiasts tend not to like tax increases, but as The Associated Press reported, the city of Vienna, Ga. (pop. 3,841), would have to shell out about $60,000 a year to increase security at city buildings. “Do we raise taxes to provide the police protection or do we take the risk of potential injury to our public?” asked Mayor Pro Tem Beth English, who also is president of the Georgia Municipal Association. Too bad if this gun lobby subsidy comes out of the school budget.

Oh yes, and while conservatives claim to hate the centralization of power, this law wipes out a series of local gun regulations. The gun supremacists just don’t trust those pesky local elected officials.

People with a gun license who try to carry a weapon onto an airplane get a nice break under this bill. If they’re caught with a gun at a security checkpoint, nothing happens as long as they leave the area. Try, try again. Watch out if you connect through Atlanta.

And law and order goes out the window. As Niraj Chokshi noted in The Washington Post, this statute gets rid of state requirements that firearms dealers maintain records of sales and purchases. Databases on license holders that span multiple jurisdictions are banned. Those who commit gun crimes must be chuckling, “Can you find me now?”

Nothing better reveals the utter irrationality of our politics for the whole world to see than this madness about guns -- and no issue better demonstrates how deeply divided our nation is by region, ideology, and party.

The New York Times found that in the twelve months after the Sandy Hook shootings, thirty-nine laws were enacted tightening gun restrictions; twenty-five were passed by state governments under full Democratic control. Seventy laws were passed loosening gun restrictions, forty-nine of them in Republican-controlled states. According to The Wall Street Journal, twenty-one states strengthened firearms restrictions in 2013, and twenty weakened them.

Nowhere else in the world do the laws on firearms become the playthings of politicians and lobbyists intent on manufacturing cultural conflict. Nowhere else do elected officials turn the matter of taking a gun to church into a searing ideological question. But then, guns are not a religion in most countries.

The program for the NRA’s annual convention, held over the weekend in Indianapolis, listed sessions on “Survival Mindset: Are You Prepared?”; “Creating a Constitutionally Centered Estate Plan”; and “Refuse to be a Victim.”

Party on, guys. I can’t wait for you to figure out the ways in which even Georgia’s law is too liberal. In the meantime, the nation’s unarmed majority might ponder how badly we have failed in asserting our own rights.