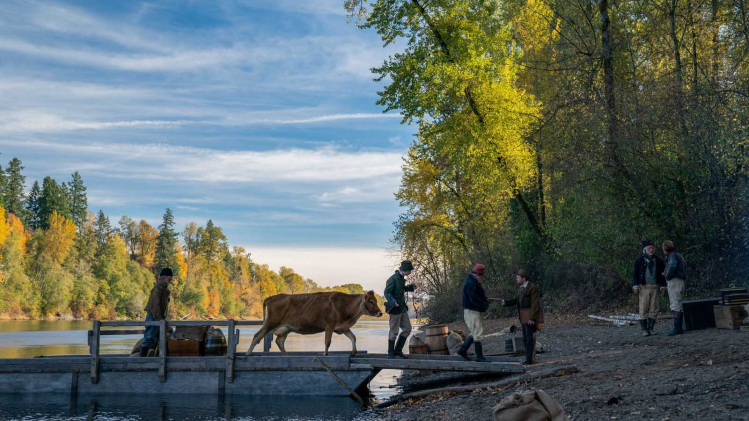 The films of Kelly Reichardt are about as indie as you can get. Shot on shoestring budgets with largely unknown actors, early works like Old Joy and Rivers of Grass are undeniable masterpieces of American cinema. Intimate, specific, and unsentimental, these films tell hard stories about relationships between outsiders lost at the crossroads of history and modernity.

Reichardt begins First Cow, her latest film, in the present day, with a young woman’s discovery of two buried skeletons: she was out walking when her dog began to dig one up. The film then flashes back to Cookie (John Magaro), a young man whose job is to feed a group trapping their way through the Oregon territory in the 1820s. We first see him foraging for mushrooms in the forest. Cookie’s sensitive demeanor sets him apart from the rugged, brutish trappers, who look like bears as they waddle around wrapped in animal skins. But he is creative, resourceful, and loves to cook.

After being chased out of camp by the trappers, he finds King Lu (Orion Lee) hiding naked and freezing in the forest. King Lu is on the run from Russian traders who have killed his friend. Cookie gets him something to eat and wear before their paths part ways. They soon run into each other again at Fort Tilikum on the Columbia River, and an easy bond forms between them. Though both have come out to the territory to make their fortunes—Cookie from out east, King Lu from Canton—their demeanors contrast nicely: King Lu is a dreamer and a talker with big plans, while Cookie is guarded and keeps his gaze just ahead of him. He stays busy with small tasks, cleaning, picking, and, especially, cooking.

Reichardt’s 1820s Oregon is a world in tumult. As King Lu notes, it’s a place where everyone is congregating in expectation of some great change. For Cookie and King Lu, the change arrives in the form of the eponymous cow—the first ever in the territory, brought in by the English Chief Factor (legendary British character actor Toby Jones) to provide milk for his tea. Cookie and King Lu hatch a plan to steal a little of the cow’s milk, and then more and more, so that Cookie can use the cream to bake small cakes, which they begin to sell at Fort Tilikum. But as their baking business grows more successful, they come ever closer to being caught.

Many of Reichardt’s familiar themes and concerns are on display here. The character of the people in this film is often revealed through their work: what they do and how they do it. She likes to show us an action’s every step; few scenes in Meek’s Cutoff are more memorable than the unbroken shot of Michelle Williams finding, loading, and firing a rifle, a mundane action lent extra significance by Reichardt’s unwillingness to cut away. The most delightful scenes in First Cow involve Cookie picking berries or mixing batter as King Lu idles in the background. The calm activity of the one is balanced against the nervous inactivity of the other. When the two finally get split up, it is a catastrophe. One particular shot of hands grasping all manner of currency—shells, silver, company scrip—strongly recalls Bresson’s L’Argent, foreshadowing the film’s quietly harrowing final scenes, in which everything the pair has built is roughly and easily thrown aside.

The character of the people in this film is often revealed through their work: what they do and how they do it.
sharetweet

In First Cow the value of everything is up for grabs. The first time King Lu tastes one of Cookie’s cakes, he asks, “What do you think we can get for that?” Furs reign supreme, but their value is affected by the fashions of far-off cities. Milk, being scarce, is a commodity worth killing over. And yet, in moments of crisis, all of this goes overboard. Late in the film, as King Lu flees for his life, he comes upon a member of the Grand Ronde with whom he fumblingly communicates through the Chinook Wawa language, which Reichardt chooses not to subtitle. After going back and forth, the man carries Lu away in his canoe in exchange for the buttons on his coat.

King Lu says he likes Oregon because “history isn’t here yet.” But that isn’t quite true. With the fur company, not just exploitation but rude commercial calculation has arrived in Oregon. At one point in the film, Cookie and King Lu are contracted by the Chief Factor to bake a clafoutis for his high tea with a visiting dignitary. As the two approach the little house the Chief Factor has built in a clearing, Reichardt sets us inside its sitting room, done up with expensive sofas and landscape paintings. There he and his guest from the army are discussing corporal punishment. How often, the guest asks, can you lash a man without rendering him unfit for work? The Chief Factor laughs and declares that sometimes killing a man is worthwhile for the effect it will have on his comrades. “Any question that cannot be measured,” he gloats, “is not worth asking.” Whether dealing in furs or lumber or oil, the same logic remains, unsustainable but inexhaustible.

Reichardt does not try to refute this logic directly; instead, she infuses the scenes around this one with a quality that logic excludes: generosity. The friendship between Cookie and King Lu is warm and genuine. When, late in the film, Cookie cries out in a fever, “I have to find my friend,” it breaks your heart. Cookie’s banter with the cow as he milks her contains more humanity than everything said by the Chief Factor.

Reichardt is the kind of filmmaker whose films teach you how to watch them. Her shots are often quite long and frequently hold after characters have left the frame, leaving the audience to contemplate what might be considered dramatically dead space. Your pulse slows as you learn to take the film at its own pace, gazing with Reichardt around the edges of the story. Seemingly minor characters are given memorable traits, and one-off shots of extras, or non-characters, color the story throughout. In the film’s defining shot, two indigenous characters (one played by Certain Women stand-out Lily Gladstone) are allowed to sit and speak without subtitles after every primary character has left the room. This simple reframing brings them alive for viewers. Reichardt wants us to see Oregon not as it is imagined by the Chief Factor, a man from far away who has brought his world with him, but as these women see it. For all his importance, he represents only the surface of this place; the two indigenous women, like Cookie and King Lu, are its depths.

Reichardt opens her film with an extended shot of an oil tanker as it moves along the Columbia River. Near the end, she brings us back to the cow, locked behind a pitiful wooden fence, a harbinger of enclosures to come. It is the arc of history in reverse, reminding us that another world was once possible.