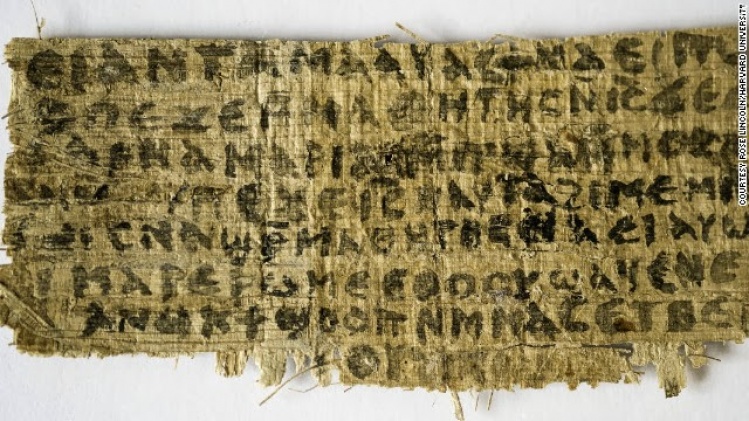 You may recall the hustle and bustle about the so-called "Gospel of Jesus' Wife" papyrus fragment from a year ago. I blogged about it a few times (here and here) and contributed to the Washington Post on it here. (And then Grant Gallicho cleverly mocked me at a Commonweal event, to which I responded here.)

Recently NT scholars Larry Hurtado and Mark Goodacre, both active bloggers, have raised questions about what has happened to this papyrus. While I am certainly not privy to the details at Harvard, I did have a chance to see infra red photos of the papyrus last year and to discuss it with some other papyrologists.

Below the jump I'll summarize my notes from that meeting (beyond what was previously blogged). Beware: content very boring to non-specialists!

- I don't know if the ink and papyrus were tested. The ink was to be tested by spectroscopy, but in fact this can only falsify the document—it can’t demonstrate authenticity, as many others have already noted. In addition, an ancient formula of carbon ink is not difficult to make. The infrared images suggest the ink is carbon-based and thus either ancient or made according to an ancient method.

- All the other papyri in the owner’s collection appear to be normal and bland documentary papyri (Greek, Coptic, Arabic).

- I was not persuaded that the epsilon in line 6 (shafene) demonstrates that the writing instrument was a brush. There seem to be no other letters that would lead to this conclusion, and it’s not likely that a scribe (ancient or modern) would switch instruments while writing.

- That being said, some suspicious items included: the ends of lines 3, 5, and 6 seem not to include ink for the subsequent letters, where we might imagine some.

- I was not convinced that the fragment provides “too much content.” Coptic is an efficient language, especially with articles, pronouns, and prepositions. If we cut out parts of Coptic Thomas from Codex II and give ourselves 19-21 letters per line for 7 lines, we learn a lot of content and can reconstruct even more.

- Nor is this text’s content “too good to be true.” We have already learned lots of what seemed to be outlandish bits of content from the authentic Apocryphon of John, the Gospel of Philip, etc.

- The back of the papyrus is the most interesting thing not usually discussed. It does not seem plausible that the back is a modern forgery. That being said, the differences between the back and the front have been discussed, especially the fewer lines on the back and slightly larger letters and line spacing.

- The infrared images showed a few things more clearly: First, it seems likely that the proposed oblique stroke in line 4 is more likely the right side of an upsilon, and possibly the end of the word maay (“mother”) or mmay (“there”). Second, it seems like there is ink at the beginning of line 7 underneath the iota of line 6. Third, the infrared image makes the back of the papyrus more legible, or at least, easier to see that there is more text there.

- One of the things noted about the text on the back is that the word ebol seems clearly to be written with an omega (as ebwl). It's possible to say that on the front, the word anok (line 7) seems also to have a lengthened vowel and be written as anwk. If so, this could strengthen the case that both front and back were written by the same person.

- I also still think it highly unlikely that someone could forge the abrasion and stripping of the fibers at the beginning of line 4 on the front. Then again, every expert forgery teaches something new, I suppose.

- On the whole, I see many suspicious things about the papyrus, but the weighing of probabilities does not necessarily tilt toward the conclusion of “forgery,” certainly not a “clumsy forgery,” as some have said. On the other hand, I don’t think there remain many “true believers” in staunch defense of the text’s authenticity.

- in conclusion, if it is a forgery, then the forger got very lucky in finding a papyrus in cartonnage that had ancient writing on the vertical fibers and blank papyrus on the other side.