There Is Such Thing as a Republican Judge
By E. J. Dionne Jr.
Donald Trump
Supreme Court
Domestic Affairs
Columnists 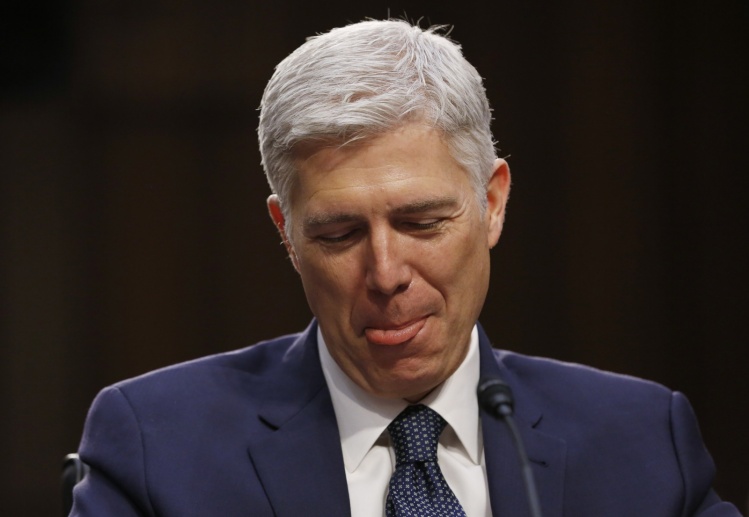 With a shrewdly calculated innocence, Judge Neil Gorsuch told a big fat lie at his confirmation hearing on Tuesday. Because it was a lie everyone expected, nobody called it that.

“There’s no such thing as a Republican judge or a Democratic judge,” Gorsuch said.

Gorsuch, the amiable veteran of many Republican campaigns, is well-placed to know how serious a fib that was. As Sen. Al Franken, D-Minn., noted, President Trump’s nominee for Merrick Garland’s Supreme Court seat actually received a citation for helping win confirmation for Republican-appointed judges.

We now have an ideological judiciary. To pretend otherwise is naive and also recklessly irresponsible because it tries to wish away the real stakes in confirmation battles.

The best scholarship shows an increasingly tight fit between the party of the appointing president and how a judge rules. It’s a point made in The Behavior of Federal Judges by Lee Epstein, William Landes, and Judge Richard Posner, and also in research by Neal Devins and Lawrence Baum.

As Devins and Baum write, party polarization now affects the behavior of judges, “reducing the likelihood that they will stray from the ideological positions that brought them to the court in the first place.”

Face it: If partisanship and ideology were not central to Supreme Court nominations, Gorsuch would be looking at more years in his beloved Colorado. Notice that I referred to the Supreme Court seat as belonging to Garland, the chief judge for the D.C. Circuit Court of Appeals, appointed by President Obama to replace the late Antonin Scalia. In an appalling act of extreme partisanship, the Republican-led Senate would not even give Garland a hearing.

It’s frustrating that so many minimize opposition to Gorsuch as merely the payback for Garland the Democratic base yearns for. This content-free way of casting the debate misses what’s really going on: Thanks to aggressive conservative jurisprudence, we have a Supreme Court that, on so many issues, continues to push the country to the right, no matter which party controls Congress or the White House.

The reason Republicans wouldn’t even let the moderately liberal Garland make his case is that conservatives who regularly denounce “liberal judicial activism” now count on control of the Supreme Court to get results they could never achieve through the democratically elected branches of government.

They could not gut the Voting Rights Act in Congress. So Chief Justice John Roberts’s court did it for them. They could never have undone a century’s worth of legislation limiting big money’s influence on politics. So the Citizens United decision did it for them.

And it’s true, as Franken and other Democratic senators noted, that Gorsuch has done what economic conservatives count on the judges they push onto the courts to do: He regularly sides with corporations over workers and consumers. We can’t know exactly where the millions of dollars of dark money fueling pro-Gorsuch ad campaigns come from, but we have a right to guess.

You don’t have to believe the liberals on Gorsuch’s record. Last month, a report by the Orrick law firm concluded: “After reviewing Judge Gorsuch’s background and record of judicial opinions, it appears that the prior relatively pro-business conservative trajectory of the Supreme Court will now be restored.”

This is the whole point, and GOP senators couldn’t allow Garland to get in the way of that. Better to have Gorsuch settle the court’s current 4-4 tie.

Senate Democratic leader Charles Schumer tried to slow the Gorsuch train by noting that if a Democratic president were under investigation by the FBI, as Trump’s campaign is, Republicans would be “howling at the moon about filling a Supreme Court seat in such circumstances.”

Republicans, of course, just shrugged off Schumer’s accurate rendition of their hypocrisy. The nominee himself flicked away White House Chief of Staff Reince Priebus’s declaration to the Conservative Political Action Conference that Gorsuch “represents the type of judge that has the vision of Donald Trump and it fulfills the promise that he made to all of you.”

Bless Priebus for telling the truth and making clear that uncompromising resistance to Gorsuch is not primarily about payback or thrilling the base. The point is to make clear that conservatives, including Trump, want the court to sweep aside decades of jurisprudence that gave Congress broad authority to legislate civil rights and social reform, along with environmental, worker and consumer protections. Gorsuch good-naturedly evaded nearly every substantive question he was asked because he could not acknowledge that this is why he was there.