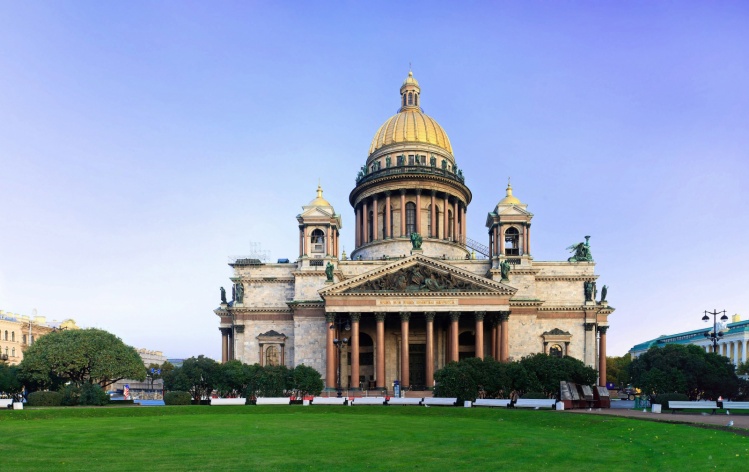 Last June, when President Donald Trump met President Vladimir Putin for the first time, much was made of the parallels between the two leaders. Along with their nationalist tendencies, personal boastfulness, and carefully crafted cults of personality, both have rooted their rhetoric in promises to make America or Russia great again.

Traveling recently with my teenage son to St. Petersburg—home to Putin when he worked for the KGB—I saw many hints of the empire Putin may be envisioning as he puts a new and more impressive face on Russia, twenty-five years after the fall of the Soviet Union. Imperial palaces, the glittering art collection of the Hermitage Museum, and the orderly canals and grand avenues all hark back to a time when Russia was rising to become a great power in the eighteenth and nineteenth centuries.

But as a symbol of past Russian greatness, nothing quite compares to St. Isaac’s Cathedral. The largest Orthodox basilica in the world, it was built on a foundation said to have consumed whole forests, with nearly eleven thousand piles driven into the swampland adjoining the Baltic Sea. Three hundred thousand tons of marble and granite were used to construct the neoclassical exterior. The cathedral has 112 polished red granite columns, some of them 60 feet high and a full 7 feet in diameter.

The structure’s crowning glory is its colossal dome, a technological wonder in its day, built out of cast iron and gilded with 220 pounds of pure gold. It was said that sixty men died in its construction, from the toxic fumes of mercury used to help spray the gold onto the dome’s surface. But when it was completed in 1858, it was considered a masterpiece both inside and out.

Curiously, St. Isaac’s played an important role in the erection of a similar shrine to national greatness, thousands of miles away, in Washington, D.C. By the mid-nineteenth century, the westward expansion and growth of the United States had increased the size of Congress, and in 1855 the decision was made to install a new and larger dome atop the recently expanded Capitol building. In designing it, architect Thomas Walter drew heavily on French architect Auguste de Montferrand’s designs for St. Isaac’s dome. As a result, the two possess almost identical proportions.

A paradox of St. Isaac’s Cathedral is the identity of the saint himself, a hermit who lived in a wilderness hut outside fourth-century Constantinople.
sharetweet

A paradox of St. Isaac’s Cathedral is the identity of the saint himself, a hermit who lived in a wilderness hut outside fourth-century Constantinople. Isaac confronted the Roman Emperor Valens, persecutor of Nicene Christians, and predicted his violent death—and when it came to pass, he was pulled from his humble monastic life and made abbot of what subsequently became known as the Dalmatian Monastery. His death on May 30 around 396 created a Christian feast day that coincided with the birthday of the Russian emperor, Peter the Great, almost 1300 years later. So it was that Peter built a small wooden church at the heart of his new capital city of St. Petersburg, on land taken in a war against Sweden. There he married his second wife, and initiated a period of territorial expansion and Western cultural transformation that created the Russia to which Putin now hearkens in his calls to national greatness.

Built on that spot, the cathedral has served both secular and religious purposes, functioning under the Soviets as—of all things—an atheism museum. As for its kissing cousin in our nation’s capitol, it is not widely known that Sunday religious services, sometimes led by Catholic priests, were held in the House Chamber of the Capitol Building for well over half a century, from the time of Jefferson until after the Civil War.

Today beneath that dome, Republican leaders are busily deconstructing the Obama legacy, seeking to dismantle gains in health-care coverage and cut back on spending for job training, education, and the environment in favor of a significant military expansion. In Russia the extraordinary erosion of democratic institutions under Putin and his kleptocracy has supplanted the simple goodness of a St. Isaac. Meanwhile in Washington, the word “peace” was long ago removed from the title of the Capitol Dome’s Statue of Freedom, Libertas—whose image now graces the “Global War on Terrorism Civilian Service Medal” that recognizes Defense Department employees involved in the invasion and occupation of Iraq.

Thus over time does the sacred yield to the profane. These and other developments, amid belligerent calls to national greatness, leave both presidents facing a prickly question: Can a country be considered great without also being good?