‘The Hummingbirds’ by Ross McMeekin
By Nick Ripatrazone
Books
Media 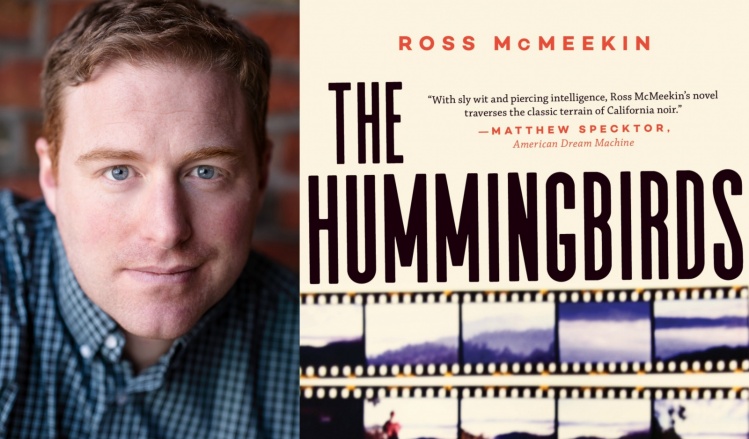 “Showbiz,” filmmaker Kenneth Anger once said, “is a synonym for sin.” Stories of sexual harassment and abuse now arrive as weekly, even daily, revelations. The deluge of accusations reminds us that at least for some time, Hollywood knew how to keep secrets.

Ross McMeekin’s debut novel The Hummingbirds is a Hollywood book. Full of secrecy and scandal, the novel shows us a world perfectly rehearsed and primped; its characters are devoted to keeping up appearances of fame, wealth, and success, even if it means living in an illusion.

Ezra Fog is a groundskeeper for a wealthy celebrity couple who rent a Los Angeles estate. He lives in the pool house, with a front-row view of Sybil Harper, the beautiful wife of filmmaker Grant Hudson. Ezra longs for Sybil, with her legs that “the public loved to gaze at, celebrate, and demonize,” but feels unworthy of her.

This fear and doubt spring from his memories of childhood, which was dominated by his mother’s involvement as a prophetess in a bird-deifying cult. His experience in the cult has stuck with him—a restrictive attitude towards sexuality, preachers who thunder about “God’s anger over our sinful and degenerate culture,” and his mother’s ecstatic visions of apocalypse. The flashbacks to Ezra’s childhood occur throughout the book and show just how much he has been scarred by the cult. By adulthood, Ezra has let go of his mother’s beliefs, but he has also inherited her manic passion. One manifestation of this is his obsession with photography, which began in childhood with pictures of the cult’s revered birds. Now Ezra is compelled to take shots of Sybil.

Stifled by her husband, Sybil longs to quit her increasingly lurid films and do serious work. She is attracted to Ezra’s oddness and vulnerability, and as she starts to see him as an escape from Grant, the two begin an affair. Sybil has aspirations that Grant won’t encourage: she wants to star in a “serious” film set in the Middle East, where Ezra can also capture the exotic birds he so loves in photographs. It seems perfect, but like his mother’s cult, this dream is built on illusion and obsession. Grant recruits Ezra to keep tabs on Sybil, and Ezra must choose which employer it’s more dangerous to betray: wife, or husband.

McMeekin builds a world where secrets, desires, and an obsession with appearance are all that matter.
sharetweet

McMeekin builds a world where secrets, desires, and an obsession with appearance are all that matter. His writing has a cinematic quality: lush descriptions of mist lifting off the pool in the dark of night, or grotesque accounts of the cult’s devotions and abuses. Even the characters might realize how artificial their lives are. The narrator recounts Sybil’s musings about her nights with Ezra: “They’d relax in bed, sun streaming through the windows, overhead fan spinning. If staged for screen, someone might place a pitcher of ice water with lemon on the nightstand next to the bed and make sure to get a sound bite of ice cracking as it melted.”

Ezra’s memories inject themselves into the events of the present, especially during moments of near-intimacy with Sybil, drawing him back to relive his mother’s fanaticism. In descriptions of these hazy memories, the prose becomes surreal. McMeekin is usually a controlled writer, but some scenes that express Ezra’s desire feel overwritten. Despite this, these passages draw a vital parallel: Ezra’s memories of his mother’s religion make it easy for him to transition into the delusions of Hollywood. He remembers his mother's prediction of the coming apocalypse when he was thirteen. Cult members, along with reporters and photographers, flocked to the coastline to witness the rapture—or at least to see a good show. But the apocalypse never came, and the bored, disappointed crowd left. Ezra stood alone with his disoriented mother, and a photographer who wouldn’t stop taking shots of the pitiful pair.

Perhaps, having experienced such a dramatic unveiling of a sham, Ezra should have known a pretty fiction when he saw one. The Hummingbirds gradually reveals that everything in Ezra’s world has a veneer of truth and glamor, but underneath is deception and destruction. In Hollywood everything is given a sheen of perfection, and its devotees are committed to maintaining the charade. And as the novel reaches its conclusion, Ezra discovers what people are willing to do to preserve their delusions.

In recent news, we’re seeing what’s left in Hollywood when the veil is lifted from fame and power. In this novel, the characters must find out for themselves. The Hummingbirds reminds us that people worship appearances, defend lies, and take advantage when they’re allowed to keep their illusions. The real world isn’t so different.