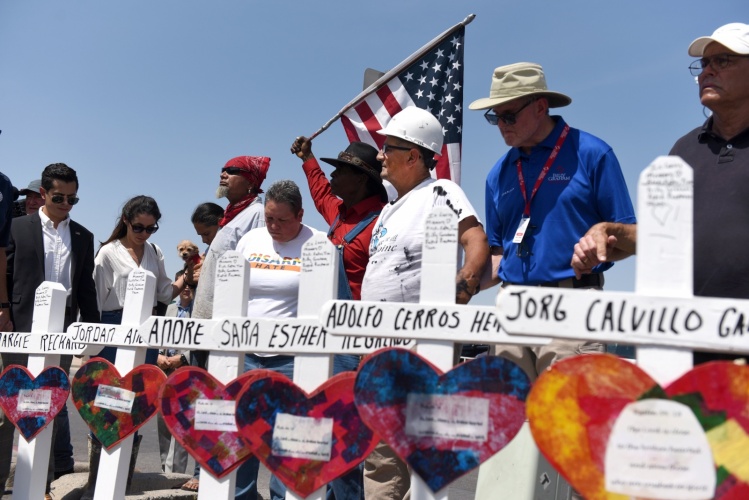 People pray in front of crosses honoring the victims of the Walmart massacre in El Paso, Texas, as part of a protest for stricter gun control, August 5, 2019. (CNS Photo/Callaghan O'Hare, Reuters)

Years before the 2016 election, those who were paying attention noticed that faith-based activism was showing signs of a resurgence in the United States. Black churches were organizing against gun violence. The sanctuary movement, where churches take in immigrants to shield them from deportation, was being revived. The Moral Mondays protests, led by the Rev. William Barber, were starting to gain national prominence. But most of these stories were rarely mentioned in secular, mainstream news outlets. If you read about them at all, it most likely would have been in the coverage they received from left-leaning and religious media.

That changed post-Trump, when the Religious Left suddenly became part of the national conversation. The irony for those of us who had written about it for a long time was that the Religious Left had actually been there all along; Trump’s win just caused people to notice. Clergy standing with linked arms before white supremacists, hijab-wearing activists in the streets, Native water protectors at Standing Rock, Sikhs feeding Black Lives Matter protesters: it all formed a picture that many distressed and frightened Americans needed for a sense of consolation, even hope.

Jack Jenkins, author of the entertaining and informative recent book American Prophets, was there at Charlottesville, Standing Rock, and many other pivotal events. His dogged reporting for ThinkProgress and Religion News Service perfectly positioned him to write the narrative of how progressive, faith-based movements have grown, changed, and cohered (or not) over the past decade. Before Trump, the story of the Religious Left in America was mostly local and granular, rather than sweeping and national; Jenkins tries to bring the two approaches together, moving between the work of activists in far-flung towns and policy fights in Washington D.C. This newfound visibility and recognition means, of course, that pundits are scrambling to define the Religious Left—and therefore to have some ownership of it.

Take the example of an online spat in May, not long after Jenkins’s book was published, over whether the Religious Left actually existed, or had been willed into being by narrative-starved journalists. In the midst of these arguments, the New York Times’s Elizabeth Bruenig wrote (in a now deleted tweet) that “there’s no meaningfully religious left,” because the Religious Left is just “people on the internet.” I don’t mean to single her out from among the debate’s many participants, but what she expressed is worth mentioning because it’s a common sentiment. Bruenig made her observation in the context of comparing the Religious Left to the Religious Right. On those terms, she is correct. The Religious Left still doesn’t and probably never will exist on the same institutional scale as the Religious Right, and it certainly doesn’t have the Religious Right’s electoral heft.

The Religious Left had actually been there all along; Trump’s win just caused people to notice.
sharetweet

That is precisely the view that Jenkins takes aim at over and over again in American Prophets. In his telling, the Religious Left has never positioned itself as an alternate version of the Religious Right. Jenkins offered a snappy rejoinder to Bruenig on Twitter at the time, which serves as a decent summary of his approach: “there is nothing on the left that looks/operates like the Religious Right. The modern left is a coalition of coalitions & often disagrees with itself.” The Twitter debate seemed to prove as much. But it also demonstrated that as the progressives of faith profiled in Jenkins’s book rise to greater prominence—people like Rev. Barber, Alexandria Ocasio-Cortez, Linda Sarsour, Valarie Kaur, Simran Singh, Rev. Traci Blackmon, Sr. Carol Keehan, and Sr. Simone Campbell—there will be a rush to claim and corral them, trying to fit them into the ready-at-hand categories so many commentators have learned to lean on. They might wonder why anyone should care about the Religious Left if it doesn’t walk, talk, sound like, and get people elected like the Religious Right, but that reduces the work of faith-based activists who have put their lives on the line to charts and polls. It also misses one of the Religious Left’s most important differences from the Religious Right: it does not belong to one faith or one political party.

That unruliness is partly why the Religious Left, according to Jenkins, is “amorphous and ever-changing,” hard to pin down and easily define. Jenkins’s time working for ThinkProgress meant that he had impressive access to the inside story of the Obama’s administration’s fight for the Affordable Care Act, which includes a jaw-dropping anecdote about the leadership of the U.S. Conference of Catholic Bishops. But the book’s real strength lies in the snapshots he provides of more grassroots, community-based movements like the Standing Rock occupation and Occupy Wall Street’s Protest Chaplains, along with mentions of Christian Socialist groups, anarchist leftist Quakers, and other smaller, local, off-the-radar faith-based movements. If the Religious Right’s heft “is measured in electoral might,” as Jenkins puts it, the Religious Left “builds power through a mixture of moral arguments, liberation theology, and the art of protest.”

It’s tempting to use any book review to talk about what a book gets wrong and what it should have done differently. I feel that tug especially in this case, because I not only know many of the people Jenkins profiled but also have shared meals, car rides, and worked soup lines with more than a few of them. But that seems to go against the spirit of Jenkins’s mostly excellent book. His account of the Religious Left is practically an invitation for those who understand it differently or have different stories to tell to write their own articles and books. Jenkins does weave in history, theology, and informed analysis throughout the book, but he’s a reporter, and his strength as a writer is found in the narratives he crafts. Storytelling, as he notes, is one of the Religious Left’s favorite tools. Stories give us frameworks of understanding and ballast for difficult times, which might be what makes this book especially useful right now. If people of faith are rising up against injustice, this collection of stories might help sustain us through the perils ahead.

When I returned to the Catholic Church as an adult, I struggled to understand how a person like myself—from a family with deep activist roots, and perpetually disappointed by the U.S. bishops’ failures to speak out on behalf of the oppressed—would ever find a place in it. My parish priest, the late Fr. Al Moser, listened to my complaints and reassured me I was far from alone. Go find your people, he said, and eventually, I did. Jenkins’s book and the work of all the reporters and writers pursuing the stories of the Religious Left are helping so many of us find our people. Because that’s what the Religious Left ultimately is: not a monumental movement or a faceless political mass, but a people in search of one another.

American Prophets
The Religious Roots of Progressive Politics and the Ongoing Fight for the Soul of the Country
Jack Jenkins
HarperOne
$27.99 | 352 pp.