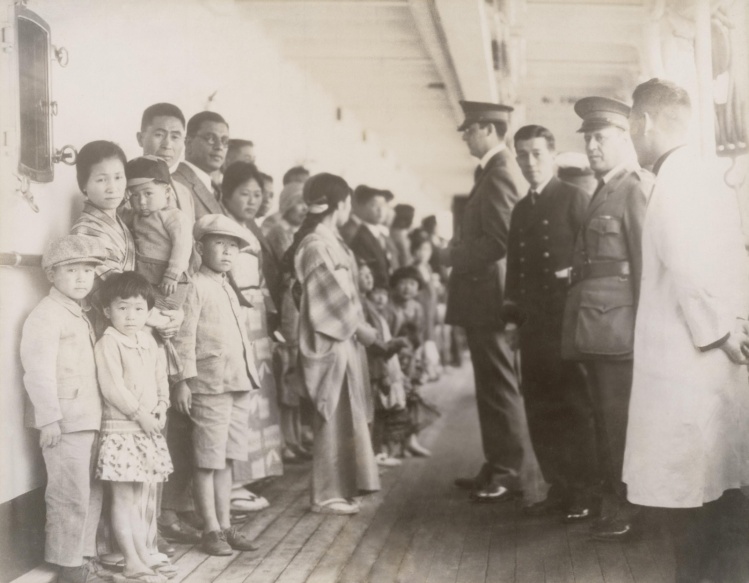 In 1966, my mother and grandmother immigrated to the United States from southern China, after waiting seven years for visas in Hong Kong. A decade later, in 1976, Jia Lynn Yang’s mother immigrated to the United States from Taiwan, with a background in microbiology that increased her chances for permanent residency. Yang’s father, who was from Shanghai, was able to stay in the United States after completing school due to a family-reunification preference in immigration law. These arrivals and settlements—Yang’s parents, my mother and grandmother—were made possible after Lyndon B. Johnson signed into law the 1965 Immigration and Nationality Act, a key piece of legislation that is the centerpiece of Yang’s new book, One Mighty and Irresistible Tide: The Epic Struggle Over American Immigration, 1924–1965. That 1965 law overturned decades of immigration restrictions by abolishing the immigration quotas and banning “discrimination against immigrants based on race or ethnicity,” allowing families like ours to make their way to America.

A commonplace belief in American self-understanding is that we are a “nation of immigrants.” Yang’s book is the story of how we arrived at such an identity. She presents a roiling legal drama with a sprawling cast. First we meet Albert Johnson, a newspaper publisher elected to Congress in 1914, two years after he wrote in a local paper that “the greatest menace to the republic today is the open door it affords to the ignorant hordes from Eastern and Southern Europe, whose lawlessness flourishes and civilization is ebbing into barbarism.” Johnson went on to chair the House Immigration Committee and to co-sponsor the severely restrictive Johnson-Reed Act with Sen. David Reed, who also made no attempt to hide his fear and distrust of immigrants.

The Johnson-Reed Act of 1924 is where Yang begins her story of this forty-year battle over immigration. In meticulous detail, she reveals how a seemingly singular historical event, like one law’s ratification, is actually a confluence of circumstance, personal agenda, and public emotion. The passage of the Johnson-Reed Act, for instance, converged with the reemergence of the Ku Klux Klan, public anti-Semitism from prominent figures like Henry Ford, a post–World War I industrial depression, a steady rise in Japanese immigration, and lingering anxieties about white racial purity. All this pushed President Calvin Coolidge to impose severe immigration quotas based on the 1890 census, as well as a literacy test, immigrant-targeted taxes, and a ban on immigration from nearly all countries in Asia. The 1924 law relied on false nostalgia for a census that only seemed to depict a homogenous, Northern European–descended nation: in reality, 15 percent of the nation were immigrants in 1890. Between 1924 and 1965, legislation continued to be drafted in favor of both tightening and loosening immigration restrictions. Many bills failed to even be called to a vote, like the 1938 bill to lift quotas for victims of religious, racial, and political persecution. Some changes happened quietly by executive order, as in 1946 when President Truman declared preferential treatment for displaced persons from World War II and reversed the long-standing requirement that immigrants prove they would not become a public charge, a condition “preposterous for survivors of the war.” In 1950, the Displaced Persons Act was passed, allowing admission of 400,000 new immigrants outside preexisting annual quotas. By 1965, immigration quotas “should have allowed just over 2 million new immigrants. In reality, there had been 3.5 million.” Turns out, many immigrants weren’t counted against the quotas due to “a patchwork of laws” and other special provisions.

A seemingly singular historical event, like one law’s ratification, is actually a confluence of circumstance, personal agenda, and public emotion
sharetweet

Nearly every bill between 1949 and 1965 aimed at admitting more immigrants was championed by Emanuel “Manny” Celler, a congressman from New York and a descendant of German-Jewish immigrants. Like everyone else in Yang’s book, Celler is humanized with details, as when he and his father play fiddle and piano after Sabbath dinners. We see Sen. Pat McCarran of Nevada—who opposed Celler at every turn from his seat as House Judiciary Chair, and attacked civil liberties alongside Joseph McCarthy—with just as much humanity; as a teenager, McCarran dropped out of high school months before graduating in order to help save the family farm after his father suffered a debilitating injury. Yang shows us heroes and villains before their stories are woven into political movements, demonstrating that laws aren’t simply enacted by a disembodied government, but championed, defeated, and resurrected by human beings.

At the center of the forty-year fight that Yang describes are two related questions: What makes an American and who gets to decide? For decades, the acceptable immigrant was white, tall, and easily assimilated; loyal enough to join the military, yet independent enough to never need public assistance; hardworking, but not a job-stealer; strong and vigorous, but also meek and deferential. Later, immigrants needed to pass a literacy test that “raise[d] the bar,” and the U.S. government granted itself five years to deport an immigrant who became hospitalized or imprisoned. After World War II, it became acceptable for immigrants to arrive needing help, perhaps out of guilt over restrictive wartime quotas that had denied entry to hundreds of thousands of Jews seeking to escape Nazi Europe. With the 1957 and 1964 Civil Rights Acts, as well as the 1965 Voting Rights Act, the nation broadened its ethnic and racial notions of who was American and what they deserved as such.

One Mighty and Irresistible Tide is a history of immigration discourse as much as it is a history of immigration law. Yang skillfully traces the ways in which words betray collective fears and insecurities. In the early twentieth century, politicians spoke of immigrants with dehumanizing detachment. They were, as Labor Secretary James J. Davis wrote in 1924, no longer the “beaver-men” of his lineage who had built up the country, but hordes of “rat-men” who needed to be weeded out if they could not be “assimilated,” “absorbed,” or “submerged” into American culture. Yang writes that immigrants were seen as invaders of the “American bloodstream”; as bent nails, too flimsy to build the state; or as weeds to be culled, lest they “choke or stunt” the American crop. Lawmakers worried that other nations would treat the United States as a “trash basket of all creation,” dumping their least desirables who would then become dependent wards of the state. By the 1950s, Yang writes, the very definition of race had changed, as the idea of biological distinctions among races was abandoned after World War II and the horrors of eugenics. “Ethnicity,” “cultural roots,” and skin color began to make their way into discourse in what Yang calls a “rewiring of race in America.” Such a shift made it possible for most European immigrants and their children to be seen as simply “white.” By the time Eisenhower was president, lawmakers were using the term “refugee” to bring in survivors of natural disasters in Europe and people fleeing the Cuban Revolution.

Since 1965, Yang notes, the number of immigrants in the United States has quadrupled, despite the imposition of overall caps on numbers. However, this influx hasn’t been marked by greater welcome or less prejudice. It is, in the end, a story of new vocabulary and how we made exceptions to the rules: refugees, asylum seekers, amnesty grantees, and family-reunification cases.

Today, many of our immigration anxieties seem unchanged from 1924. We fear the loss of resources, language, culture, and identity. We fear invasion and subversion. Immigration itself still seems to threaten an Americanness largely invented or misremembered. In light of the stories that Yang brings to life, we can more clearly see that new dehumanizing language (“illegals”; “aliens”; “anchor babies”; “terrorists”) and policies (Muslim bans, border-detention camps, family separation) are also human creations. One Mighty and Irresistible Tide asks us to consider who is shaping immigration legislation; with what words and motivations they persuade; and how we too write the story with our words, our votes, or our silence.