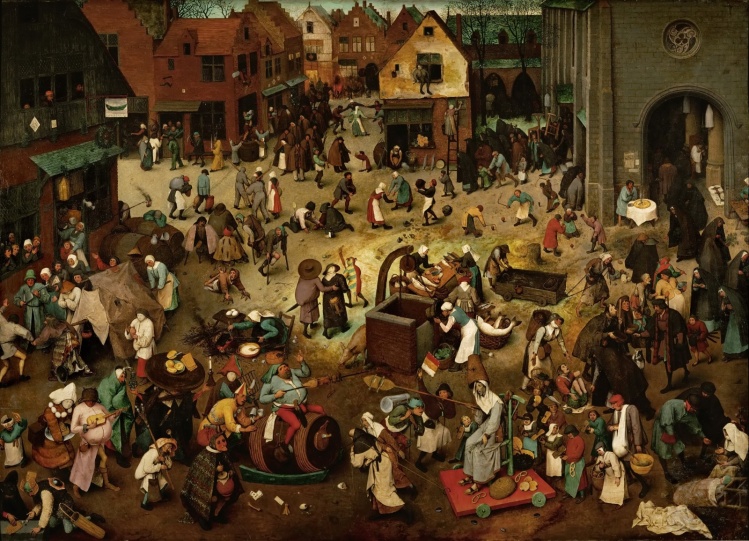 Pieter Bruegel, 'The Fight between Carnival and Lent'

As Lent approaches, I’ve been in a state of spiritual anxiety over the inevitable renunciation that the season demands. Deciding what to “give up” is a major part of my anticipation, and with Ash Wednesday drawing near, I find myself indulging a little more than usual. Justifiably, of course—the weeks of small penance and almsgiving will forgive these indulgences. But at the same time, I worry if what I’m giving up is enough. On the eve of my college graduation, I have so much to thank God for—how could forty days without chocolate or takeout possibly comprise a fitting sacrifice?

I’ve also been thinking of Pieter Bruegel’s painting The Fight Between Carnival and Lent. A typical Northern Renaissance work, crowded and somewhat moralizing, it features a bustling Flemish street scene. A tavern is found at the painting’s left: people drink, musicians play, dancers revel. The painting’s right side could not be more different: well-behaved children are gathered outside an austere, gray church, while black-shrouded nuns toil reverently. Their skin is sallow compared to the flushed red of the tavern-goers, though from their facial expressions no one in the painting seems happy.

One of the painting’s main elements, from which the title is likely derived, is found at its bottom center: Prince Carnival, a jovial, colorfully attired man on a giant barrel, jousts with Lady Lent, a spindly, drearily clad nun on a wagon filled with traditional foods of the season, like pretzels and mussels. Instead of lances, Prince Carnival wields a spit laden with meat and Lady Lent brandishes a paddle-shaped bread peel with herrings. She seems to have the upper hand: the prince’s head is slightly rolled back and one of his hands stretches resignedly toward heaven, implying Lent’s triumph. Behind this busy foreground, people prepare food and draw water from a well; beggars labor. And right in the middle, a married couple walks away from the main action: heads covered, they approach the common people at the back of the frame, unsatisfied with both extremes. The painting is one of my favorites for its rich, humorous detail—virtually every time I look, I find something new that makes me smile.

Our Mardi Gras indulgences are married to our inevitable Ash Wednesday fasting, their confluence found at the dusk of Shrove Tuesday.
sharetweet

European historian Peter Burke famously claimed in his essay “The Triumph of Lent: The Reform of Popular Culture” (1978) that Bruegel’s painting is indicative of a cultural moment in the 17th and 18th centuries. The “triumph of Lent” was the outcome of a battle between traditional popular culture (carnival, specifically) and the clergy; ultimately, the victory of the church marked a new cultural distinction between the realms of sacred and profane. “The godly were out to destroy the traditional familiarity with the sacred,” wrote Burke, “because they believed that familiarity breeds irreverence.”

The separation between these two realms is attributed to a host of cultural changes that transpired in premodern Europe. The introduction of Victorian morals, and objections to supposedly “debased” elements of popular culture on the basis of their connections to paganism, initiated a new austerity supposedly associated with the church. In our current era, though, familiarity seems to have become a new mode of evangelism, a tool for spreading the faith in our increasingly interconnected, tech-centric culture. The Vatican’s 2018 launch of a Pokemon Go-style app—“Follow JC Go!” —lets people virtually “catch” saints, while @Pontifex’s Twitter deems the Virgin Mary the original “Influencer,” a messenger of God. Burke also cites the Puritan preacher William Perkins, who declared that “it is not meet, convenient or laudable for men to move occasion of laughter in sermons.”  But as Francis recently wrote in Gaudete et exsultate, “Christian joy is usually accompanied by a sense of humor.” Reactionary traditionalists are displeased; almost five hundred years later, it’s as though the culture war has come full circle. To me, the painting can help us understand a renewed cultural intransigence, each side a virtual caricature of the other’s perceived extremity. Those drinking and celebrating are heathens, while those who labor and fast are joyless prigs. Bruegel’s painting helps me see how little human nature has changed.

But oversimplifying this division, and lauding this separation of Christianity from everyday life, neglects part of the beauty of the season: God coming into the profane, making it sacred. Christ imbues every small moment, our familiarity with Him giving us the strength to adhere to our Lenten sacrifices. And even in Lent, Sundays, the holiest day of the week, are meant for feasting: relaxation and temperate indulgence are the law on the day of the Lord. Lent is not merely an ascetic battle of abstinence over gratification—it’s a reminder that pleasure, like sacrifice, can bring us closer to God. From Gaudete et exsultate again:  “We need ‘to acknowledge jubilantly that our life is essentially a gift, and recognize that our freedom is a grace.’”

Our Mardi Gras indulgences are married to our inevitable Ash Wednesday fasting, their confluence found at the dusk of Shrove Tuesday. Benedict XVI described Lent as a period of “spiritual combat,” in which we use the arms of faith—by way of prayer, Gospel reflection, and penance—to fully celebrate the joy of Easter. As I consider what my Lenten sacrifice will be this year, Bruegel’s scene reminds me that while I need not revert to full asceticism (or worse, to self-righteous displays of piety) it’s also counterintuitive to overindulge before the season. The Fight Between Carnival and Lent may be named after the jousting scene at the central foreground, and indeed, its contemporary resonance leaves much to contemplate. But I am most drawn to the retreating married couple who approach the temperate background, in which everyday people work alongside those who play. More than the cultural triumph of temporal renunciation Burke surmised, the painting depicts our own internal battle, our temptations to succumb to extremities where simplicity suffices. Having seen excess on both sides, the couple chooses a harmonious balance, the happy median made possible by the grace of God.