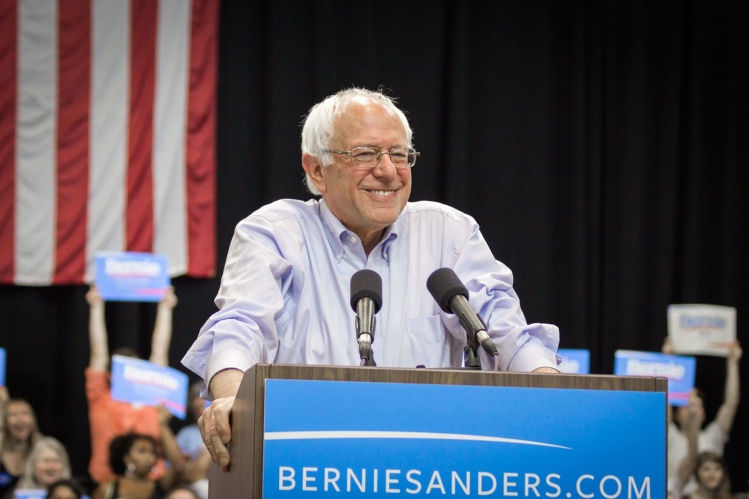 The battle lines in the 2020 presidential election are already coming into focus. And unlike in 2016, Donald Trump’s white-anxiety-fueled assault on a feckless political class won’t be countered by Hillary Clinton’s warmed-over defense of the neoliberal status quo.

This time around, Democrats are embracing a different approach; no more slogans about America already being great. Bernie Sanders, an early front runner, is a self-described democratic socialist who rails against millionaires and billionaires—and promises to fund free college and healthcare at their expense. Elizabeth Warren is the scourge of big banks and the rigged economy. They and other primary candidates are offering bold proposals for taxing wealth and financial transactions, guaranteeing free childcare for low-income families, and reshaping the economy to combat climate change.

Meanwhile, the stock of traditional GOP market fundamentalism continues to plummet. Half of Republicans—yes, Republicans—now favor a 2 percent wealth tax on fortunes over $50 million; 45 percent of them support 70 percent marginal tax rates on the wealthiest Americans. More and more writers on the right are questioning unbridled capitalism and defending a “nationalist conservatism.”

To put it bluntly, the Democratic Party of Bill Clinton is dead and the Republican Party of Ronald Reagan is too—even if, zombie-like, holdouts from both trudge onward. Americans of both parties have stopped believing the political common sense of the last two generations: that a rising tide lifts all boats, that the market rewards hard work, and that those who don’t thrive are somehow to blame for their failure.

As a result, the fight in 2020 will be between two competing visions of economic populism—one from the right and one from the left.

Populism is a word that causes confusion, especially in the political media. The misunderstanding is mostly due to a category error. Populism is not an ideology; it is a political story, one with a heroic and put-upon “we” and a villainous and corrupt “them.” Populism doesn’t prescribe one sort of governance or program over another; rather, it’s a malleable political idiom available to political leaders across the ideological spectrum.

It’s clear not just from their platforms but from the language of their campaign announcements that the left is embracing a populist strategy. Sanders rededicated his campaign to “creating a government and economy that work for the many, not just the few.” Warren declared, “Our government’s supposed to work for all of us, but instead it has become a tool for the wealthy and well-connected.” These appeals set up a dichotomy between we the people (the many) and our plutocratic enemies.

Democrats are embracing a different approach; no more slogans about America already being great
sharetweet

I’ve always thought that the left dodged a bullet the day Donald Trump stopped listening to Steve Bannon. Not that Bannon was the ingenious Svengali sometimes depicted in the media, but because Bannon’s brand of herrenvolk social democracy—welfare for whites, combined with a genuine scorn for “cosmopolitan elites”—was more treacherous than the program of cultural grievance and economic neglect that, since his departure, has dominated the Trump administration.

Trump, now ensconced in a White House surrounded by the likes of Steven Mnuchin and Betsy DeVos, has lost much of his populist edge. His greatest policy accomplishment is a massive tax cut for the wealthy—one which is only becoming more unpopular. With the exception of his trade policy, Trump has all but abandoned the economic rhetoric of his 2016 campaign. To win in 2020, he’ll have to tack back to the right-wing populist message that propelled him to victory

Given that he watches hours of Fox News every day, it’s worth wondering if Trump is paying attention to Tucker Carlson, host of the most popular cable-news show in the country. He’s emerged as a fierce critic of traditional GOP economics, hitching his nativist rhetoric to a demand for higher wages and market regulation. Carlson has shown a way for the GOP to leave behind its Reagan-era catechism and craft a policy agenda that actually aims to serve their most reliable voters.

“What you’re watching is entire populations revolting against leaders who refuse to improve their lives,” Carlson said in a now-famous monologue earlier this year. He indicted “mainstream” Republicans who have “considered it their duty to make the world safe for banking, while simultaneously prosecuting ever more foreign wars,” as well as the many Democrats “who support those goals.”

“We do not exist to serve markets. Just the opposite. Any economic system that weakens and destroys families is not worth having,” Carlson reasoned, causing some heads to spin.

What distinguishes Carlson’s populism from that articulated by Sanders and Warren? Quite a lot. There’s a reason neo-Nazi website the Daily Stormer, has called him “literally our greatest ally.”

Read closely, Carlson’s fundamental complaint is not that market fundamentalism has enabled the exploitation of workers everywhere. Rather, his main fear—deftly encoded in plausibly universal language like “regular people”—is that the current system’s depression of (white) male wages has made fewer men what economists call “marriageable,” destabilizing the patriarchal family, suppressing native-born birthrates, and thereby surrendering Western Civilization to migrating hordes from the global south.

A realignment around Carlson’s ideas would be much more durable, if only because they make sense (to native-born whites) in a way that Reaganomics no longer does.
sharetweet

As John Judis has persuasively argued, left populism defines a two-way antagonism between the people and the elites (think of the Occupy movement’s brilliant slogan that pitted the 1 percent against the rest of us, the 99 percent), while right populism is “triadic.” For the latter, the problem isn’t just the out-of-touch elites oppressing working families, but a third population—minorities, immigrants, Muslims—who are being catered to by these same elites at the expense of “real” Americans.

This sort of welfare chauvinism—more government care for “real Americans,” less kowtowing to “globalist elites”—is more dangerous than Trump’s haphazard combination of belligerent nativism, trade aggression abroad, and economic libertarianism at home. A realignment around Carlson’s ideas would be much more durable, if only because they make sense (to native-born whites) in a way that Reaganomics no longer does.

The challenge for Democrats in 2020—whoever winds up the nominee—is to fight back by articulating a populism that appeals to a capacious, multicultural “we,” while unapologetically naming our enemies: the super wealthy, and the racist politicians who want to divide us.

Luckily, populism isn’t an entirely new idiom for Democrats. In his 2008 campaign, Barack Obama articulated a “we the people” that resonated remarkably well across race and class. He declined, however, to castigate a powerful “them”: the greedy bankers and speculators who had just wrecked our economy and vaporized the wealth of the middle class.

My friend Max Berger, a longtime organizer and veteran of many progressive campaigns, once told me the ideal message for Democrats in the Trump era is Obama 2008’s “we” and Bernie 2016’s “them.”

In other words, successful candidates will be unapologetic in their embrace of multiracial democracy while being just as fierce in their denouncement of the plutocrats whose greed imperils not just our economic lives, but life on Earth itself.

The 2016 election and its aftermath inspired an interminable debate over whether the left should prioritize “class” or “race” in its analyses and political rhetoric. The answer, among everyone I respect, was always “both/and.” Race isn’t reducible to class; racism is a material reality—one which, thanks to American history, profoundly affects the distribution of wealth and power. As the historian Tim Barker has put it, “race is, for non-white people in the United States, a fundamental way of experiencing material (‘class') inequality.”

As 2020 approaches, the same questions have begun to swirl. An analysis of the 2016 electorate conducted by the Voter Study Group proved that Trump did succeed in winning socially conservative, economically liberal voters who had previously voted for Democrats like Obama.

Unless leftists are content to condemn these populations to permanent white, nativist, reactionary rule, we have no choice but to prioritize organizing—yes, ‘winning over’—white workers in these states
sharetweet

And unlike fiscally conservative but socially liberal voters (the Panera Bread Democrats), these right populist voters actually exist outside of the mastheads of major magazines and the imagination of Howard Schultz.

Accordingly, some pundits have begun to advocate a left-wing populism that deemphasizes racial and gender identity to avoid alienating the white-working-class votes lost to Trump in 2016. Others on the left insist that an appeal to populism necessarily flattens racial difference in ways that harm minorities.

Both of these perspectives miss the point. White-working-class voters won’t be won over to a progressive coalition simply by bribing them with economic rewards. As Tucker Carlson has shown, anti-plutocratic sentiment can quite comfortably coexist with animus toward racial others and immigrants. Indeed, as right-wing parties across Europe have learned—some of them from Bannon—the combination can be politically potent.

But neither can Democrats give up on the white working class altogether—even if they somehow devise an electoral college calculus that doesn’t require winning any Midwestern or Southern states. Minority populations in red states live under the rule of increasingly authoritarian statehouses and governors, whose priorities include depriving gay and trans people of their rights and safety, depriving poor and black people of the franchise, depriving working people of the right to organize, and depriving women of the right to reproductive healthcare—not to mention empowering police, prosecutors, and immigration enforcement.

Unless leftists are content to condemn these populations to permanent white, nativist, reactionary rule, we have no choice but to prioritize organizing—yes, “winning over”—white workers in these states.

That doesn’t mean abandoning racial justice or feminism. Rather, the task—as it has always been—is to convince white workers that they are part of a class that includes black and brown people, but that does not include their wealthy bosses. That is: that they are part of the working class; and that the antipathy they feel toward elites is justified and shared by the people of color scapegoated by Trump and others.

The contest of our moment is not between populism and something else. It is between inclusive, multiracial populism, and a populism which reserves the benefits of economic redistribution to white and native-born Americans.

If we don’t embrace the former, the latter may prevail.

The Remnant and the Restless Crowd