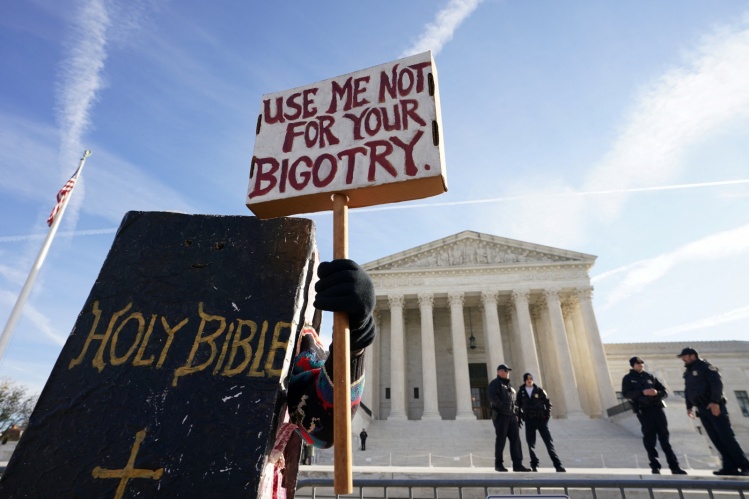 An activist clad in a Holy Bible costume protests outside the Supreme Court in Washington Dec. 5, 2022, as justices hear arguments in the case of a Colorado website designer (CNS photo/Kevin Lamarque, Reuters).

When the U.S. Supreme Court issued its historic ruling requiring that all states recognize same-sex marriages, the majority opinion declared that those who disagreed on religious grounds must still have the right to continue advancing their views.

“Finally, it must be emphasized that religions, and those who adhere to religious doctrines, may continue to advocate with utmost, sincere conviction that, by divine precepts, same-sex marriage should not be condoned,”  Justice Anthony Kennedy wrote in Obergefell v. Hodges in 2015. “The First Amendment ensures that religious organizations and persons are given proper protection as they seek to teach the principles that are so fulfilling and so central to their lives and faiths, and to their own deep aspirations to continue the family structure they have long revered.”

President Joe Biden’s signing of the Respect for Marriage Act on December 13 represents a step toward honoring that pledge, and the Supreme Court may well take matters further, depending on how broadly it rules in 303 Creative LLC v. Elenis. That’s the appeal of a Colorado graphics designer who says that for religious reasons, she won’t design wedding websites for same-sex couples.

True respect for conscience has taken a beating in our charged partisan environment—few people seem willing to extend it to those they disagree with. The Colorado web designer, Lorie Smith, is part of what is now the minority of Americans who want marriage to be reserved only for the union of a man and woman. So she filed the case, chosen by the high court to examine the place where laws prohibiting discrimination in “public accommodations” cross paths with the First Amendment right to free speech. On her website, Smith explains that she tries to use her creative gifts to serve God. “Because of my faith...I am selective about the messages that I create or promote—while I will serve anyone I am always careful to avoid communicating ideas or messages, or promoting events, projects, services, or organizations, that are inconsistent with my religious beliefs.”

One unfortunate aspect of the court’s decision to pick this particular case is that Smith’s lawsuit was preemptive; there is no gay couple to tell the court their story of what it was like to be turned away from getting the wedding website they’d hoped for. There is no Jim Obergefell to say why he wanted Ohio to recognize his marriage to John Arthur, his partner for more than two decades, dying of ALS.

Smith’s lawsuit was preemptive; there is no gay couple to tell the court their story of what it was like to be turned away from getting the wedding website they’d hoped for.
sharetweet

In oral arguments on December 5, a majority of justices were clearly sympathetic to Smith—no surprise, since this court is more conservative than the one that ruled 7-2 in 2018 in favor of Jack Phillips, the Colorado baker who refused to make a wedding cake for Dave Mullins and Charlie Craig.

The “what-if” nature of the latest case gave rise to a parade of hypotheticals during the hearing. Suppose Smith used prepared templates for her wedding websites and simply had to insert the names of the couple? Could she still refuse a gay couple? (Justice Elena Kagan) What if a heterosexual couple wants a wedding website that says both of them divorced to marry each other? (Justice Amy Coney Barrett) Can a shopping-mall photography business offering nostalgic, sepia-toned “Scenes with Santa,” evoking nostalgia for 1950s Santa scenes, refer Black families elsewhere? (Justice Ketanji Brown Jackson) Can a restaurant sell certain dishes dear to its owner’s heritage only to people from the same religion? (Jackson) Does a Jewish website designer have to create a site for the marriage of a Christian woman and Jewish man, despite opposition to interreligious marriages? (Justice Samuel Alito) Can a publishing house refuse to publish books that support a pro-life position? (Justice Brett Kavanaugh) Can a newspaper decide its wedding announcements during Gay Pride Month will only list same-sex couples? (Barrett)

In news coverage of the hearing, the focus was on how broadly the court will rule; anti-discrimination laws affecting businesses that serve the public would be severely undercut if the justices granted a wholesale exemption to anyone claiming religious exemption.

The somewhat bipartisan support for the Respect for Marriage Act is a sign that it’s possible to achieve a culture-war compromise—and perhaps a message to the top court that it should let the legislative process play out further, as it called for in regulation of abortions. The backing of religious organizations deeply opposed to same-sex marriage was key to securing the Republican support needed for the measure’s passage in the Senate. They haven’t changed their teachings; the Church of Jesus Christ of Latter-day Saints, the Seventh-day Adventist Church, the National Association of Evangelicals, the Union of Orthodox Jewish Congregations, and other organizations said they supported the measure only because they back its conscience protections.

The value of these protections is much debated among conservative religious institutions and political activists. Thanks to an addition made late in the process, the bill extends conscience protections to “nonprofit religious organizations,” which would include faith-based social services and education. In terms of the political compromise involved, opponents of same-sex marriage have won clearer religious freedom protections for their nonprofit religious institutions; supporters of same-sex marriage have succeeded in codifying rights that they already have under the Supreme Court’s Obergefell decision.

Anti-discrimination laws affecting businesses that serve the public would be severely undercut if the justices granted a wholesale exemption to anyone claiming religious exemption.
sharetweet

But the Respect for Marriage Act doesn’t protect the conscience rights of individuals who oppose same-sex marriage—an omission that the U.S. Catholic bishops objected to in continuing to oppose the bill. One suspects, though, that the issue for the bishops’ conference isn’t so much the conscience protections as their continued opposition to same-sex marriage, as law professor Douglas Laycock wrote in Commonweal.

“Pope Francis wrote in 2016 that ‘we can hardly stop advocating marriage simply to avoid countering contemporary sensibilities.... We would be depriving the world of values that we can and must offer,’” Bishop Robert Barron, chairman of the bishops’ Committee of Laity, Marriage, Family Life and Youth, said in a December 1 statement opposing the legislation.

It’s good to see the bishops quoting Francis’s Amoris laetitia, but it is instructive to read the full paragraph for this excerpt (and the one that follows):

As Christians, we can hardly stop advocating marriage simply to avoid countering contemporary sensibilities, or out of a desire to be fashionable or a sense of helplessness in the face of human and moral failings. We would be depriving the world of values that we can and must offer. It is true that there is no sense in simply decrying present-day evils, as if this could change things. Nor is it helpful to try to impose rules by sheer authority. What we need is a more responsible and generous effort to present the reasons and motivations for choosing marriage and the family, and in this way to help men and women better respond to the grace that God offers them.

We also need to be humble and realistic, acknowledging that at times the way we present our Christian beliefs and treat other people has helped contribute to today’s problematic situation. We need a healthy dose of self-criticism. Then too, we often present marriage in such a way that its unitive meaning, its call to grow in love and its ideal of mutual assistance are overshadowed by an almost exclusive insistence on the duty of procreation. Nor have we always provided solid guidance to young married couples, understanding their timetables, their way of thinking and their concrete concerns. At times we have also proposed a far too abstract and almost artificial theological ideal of marriage, far removed from the concrete situations and practical possibilities of real families. This excessive idealization, especially when we have failed to inspire trust in God’s grace, has not helped to make marriage more desirable and attractive, but quite the opposite.

Francis wasn’t urging the bishops to be culture warriors. He was calling on the church to do more to realize and express the beauty of a sacramental marriage.
sharetweet

Francis wasn’t urging the bishops to be culture warriors. He was calling on the Church to do more to realize and express the beauty of a sacramental marriage, rather than to impose rules on others. The Catholic sacrament of marriage differs from a secular marriage, which is essentially a contract. It is a covenant rooted in faith, rather than secular law. “Authentic married love is caught up into divine love and is directed and enriched by the redemptive power of Christ and the salvific action of the church, with the result that spouses are effectively led to God and are helped and strengthened in their lofty roles as fathers and mothers,” as the Second Vatican Council put it in Gaudium et spes.

The Seventh-day Adventists drew a distinction between secular and faith-based marriage in their explanation of why they supported the Respect for Marriage Act: “The Seventh-day Adventist Church respects the right of others to believe differently, however, its view on marriage is not based upon a secular rationale and it will continue to teach and promote its understanding of marriage, sexuality, and family.” Is it a distinction the bishops could make as well?