How Catholicism has come to be seen as the enemy
By Massimo Faggioli
U.S. Catholicism
Bishops
Culture 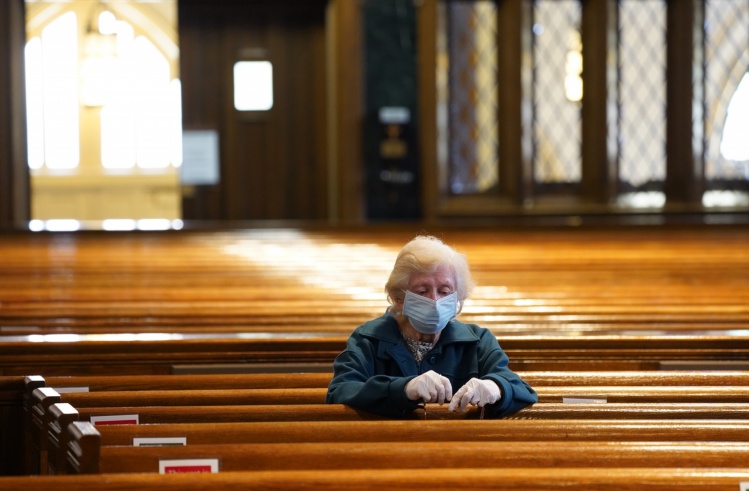 A woman prays the rosary at St. Kevin Church in the Flushing section of New York City (CNS photo/Gregory A. Shemitz).

Terry Eagleton defined culture as consisting of four components: a body of artistic and intellectual work; a process of spiritual and intellectual development; the values, customs, beliefs, and symbolic practices by which men and women live; and a whole way of life. This is worth keeping in mind when thinking about the American Catholic Church, which not only puts an emphasis on culture, but exerts an influence on it as well. The history of American Catholicism is one of institutional “implantation” and inculturation, and the encounter between Catholicism and the culture has often led to crisis, like the 1899 condemnation of “Americanism” by Leo XIII in Testem benevolentiae.

Now, in the Western world, we’re witnessing a different kind of dynamic in the relationship of Catholicism to culture. Think of it as “exculturation,” a concept articulated twenty years ago by French sociologist of religion Danièle Hervieu-Léger. It’s an unbinding of the deep affinity established through history between shared representations of culture and Catholic culture. Hervieu-Léger returns to this concept in her latest book, written with Jean-Louis Schlegel (philosopher and sociologist of religion and director of the journal Esprit), titled Towards Implosion? Conversations on the Present and Future of Catholicism.

The authors argue that there are two parallel and interrelated phenomena of implosion (or collapse) of the Catholic Church. The first is internal, stemming from the sex-abuse and financial scandals and the inept response from the institution—which highlight the lack of professionally and socially qualified personnel among the clergy—and the inadequacy of attempts at emotional and symbolic recovery by the clergy at the liturgical level (the cassock, the pre-conciliar Mass in Latin devotionalism). The authors assert that these have brought the Church to a state of de facto schism. Where struggles for the future of the Church were once centered around the opposition of clergy and laity, or around models of “conservatism” and “progressivism,” that has changed. Today the struggle is between anti-modern traditionalism on the one hand, and on the other a notion of “being Church” differently—one which seeks to shuck the liberal-progressive paradigm of adapting to contemporary culture without falling into traditionalist anti-modernism.

This poses significant questions for liberal-progressive Catholicism. According to Hervieu-Léger and Schlegel, there are signs, in France and elsewhere, of an “ongoing Catholic restoration or counter-revolution” fueled by mobilized minorities who have moved from the margins to the center of the ecclesial scene—a far different dynamic than that of the early post–Vatican II period and under John Paul II. The challenge is complicated by fragmentation within Catholicism, which now seems like an archipelago of separate groups, each with its own tendencies and relationships with the institution, but also disconnected from the institution and its regulatory bodies, leading to what the authors call a “deregulation of the institutional element” in the context of a “disqualification of a system of power.”

The authors assert that these have brought the Church to a state of de facto schism.
sharetweet

The second cause of collapse is external: the profound change in culture since the twentieth century. Today’s rejection of the Catholic culture by the mainstream differs from that of the past, the authors say, in that it is largely silent—there is no direct or explicit attack being launched, as was often the case in previous centuries. This rejection isn’t the result of the abuse scandal alone. It is also the fruit of epochal transformations in the relationship between Church and society. Hervieu-Léger and Schlegel emphasize four particular changes: the dissolution of rural societies; the redefinition of the relationship between Church and politics; the impact of science on religion and faith; and the mutation of the model of the family. This last one, they say, is “the main vector of exculturation” of Christianity, not just in widely secularized Western Europe, but even in Eastern European countries where the patterns of secularization differ—for example, between Poland and the Czech Republic. This “exculturation” has transformed the Church into a “ritual service enterprise,” something amplified or exacerbated by the pandemic. The hyper-mediatization of the Church works as something of a trompe-l’oeil hiding the structural weakness of Catholicism.

Hervieu-Léger and Schlegel offer little reassurance to those who think a global, centrifugal, and post-institutional Catholicism would survive the institutional implosion. A central thesis of the book is the need for the Church to redefine the institutional element and overcome the “territorial-imperial” and clerical vision of Catholicism in favor of a “diasporic” approach, which Karl Rahner had already written about in 1954. The key challenge is to stop fantasizing about a return to a mythical “Christian world” and to accept the condition of being a minority. The abuse crisis makes clear the need for the Church to deal with the world as it is today, given that the scandal cast a light on “the perfect connivance between the clerical system and patriarchal logic.” It is no coincidence that “the role of women has now become the key to every reform in the Church,” as they write. The challenge is institutional, but also cultural and, above all, theological: the abuse scandal “opens up an immense theological construction site” that has not yet been actualized. The reaction to the scandal highlights the minority status of Christianity. But at the same time, it also indicates the fact that “Catholicism remains one of the memory reservoirs at the center of the search for identity in our societies consumed by uncertainty and restlessness.”

Hervieu-Léger and Schlegel’s analysis of “exculturation” can apply to American Catholicism as well, even if the United States isn’t as secularized as Western Europe. There is in this country a post-colonial radicalism that sees Christianity, and Catholicism specifically, as something like an epidemic brought by European missionaries. I am not questioning the historical fact that Church-sponsored colonial enterprises spread diseases in the “new world.” But the metaphor of the Church itself as a disease brought by colonialism correlates with images of the Church that have dominated the headlines in recent years: that it is a criminal enterprise for permitting and covering up abuse; a system of oppression against individual freedom; and a patriarchal system essentially inimical to women, sexual, and gender minorities.

The institutional voice of the American bishops’ conference itself stresses a revanchist, neo-traditionalist narrative.
sharetweet

I don’t believe the narrative that holds that Catholics in the United States suffer persecution, especially given the real persecution (and threats) that Christians in other parts of the world are enduring. But it’s hard not to see that representations of Catholicism as “the enemy” have become part of the perception of our Church today. Non-Christian traditions are viewed, sometimes even by Catholics, as more Jesus-like than Christianity—and, specifically, Catholicism.

This reputational issue encompasses more than what’s summed up by the old, familiar complaints that “the bishops don’t get it.” It’s bigger and more complex. American exculturation is a response to the particular cultural obsessions of American Catholic policymakers over the last several decades. And the style of hierarchical leadership that characterizes the U.S. episcopate—ten years after the election of Pope Francis—only reinforces the perception of the un-Christian nature of Catholicism. It’s not just the individual case of a Texas bishop calling for Hillary Clinton to be “silenced for the good of humanity.” The institutional voice of the American bishops’ conference itself stresses a revanchist, neo-traditionalist narrative, something likely to continue given the leaders elected at November’s plenary meeting in Baltimore. Influential militant Catholics—clerical, lay, political figures, donors, pundits, and social-media personalities—are contributing to exculturation, perhaps unaware of just how dangerous it could be (witness their silence in the face of surging “Christian nationalism”).

This isn’t just bad for the Church overall. It’s also causing problems at the interpersonal level. In interactions both outside and inside Catholic settings, it seems as if only personal courtesy keeps people from speaking unfavorably about your Catholicism (and sometimes the criticism comes in spite of their courtesy). Establishing distance between the laity and the bishops, stressing the difference between the people and the institution, functions as something like a preemptive disclaimer to whatever conversation might follow. Not so long ago, it might have been a poorly considered pastoral letter that would have caused embarrassment—but at least those weren’t all that widely read outside a small circle of Catholic intellectuals and some Mass-going Catholics. With the internet and social media, far more people can see—and with far more clarity—the shame that some Catholic leaders bring on Catholicism. And I say this as someone who has not only studied the episcopacy for the past thirty years, but who also strenuously believes in the necessity of the episcopacy.

In an earlier stage of the post–Vatican II period, paying special attention to the culture was seen as essential in evaluating the conservative or “irreformable” aspects of the institution. But here in this country at least, the institution is increasingly under the control of anti-liberal and illiberal hands. The invisible barrier meant to separate the episcopate and seminaries from the wider world of anti–Vatican II sentiment has prevented attempts at working with those voices and to moderate their hostility; it has not, however, prevented those voices from seeping into those parts of Catholicism once considered inoculated against revanchism.

Perhaps exculturation is necessary for deconstructing a system conceived after the Council of Trent more than four centuries ago. It remains to be seen whether such a process can be carried out without risking the survival of the entire undertaking.