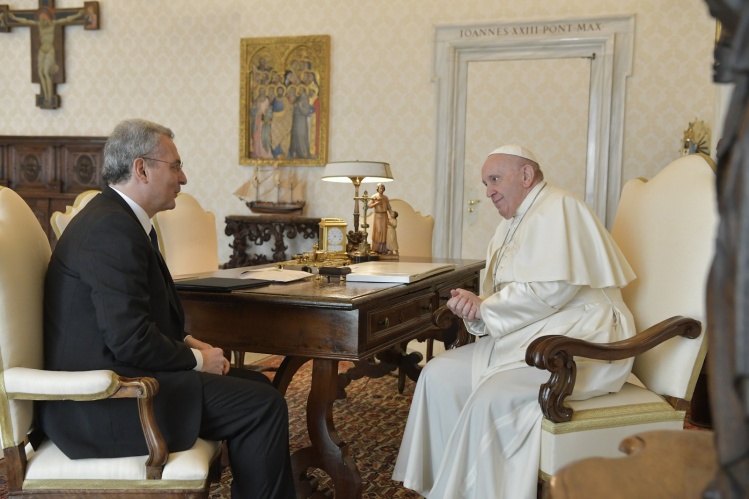 Since the election of Pope Francis, interpretations of his papacy in the United States (and the West more generally) have somehow felt not quite fully formed. This is especially the case among those who tend to position Francis simply as a corrective to John Paul II and Benedict XVI and the policies they put forth. This view rests heavily on the casting of Francis as a specific kind of figure: the Jesuit, the outsider from Latin America and the global South, the Vatican II pope. Certainly there are elements of this broad portrayal that are central to understanding Francis. But they can also obscure the complexity of this papacy. Almost nine years after the 2013 conclave, some undercurrents of Francis’s pontificate are emerging with more clarity. These last two years in particular, for example, have shed more light on Francis’s complicated relationships with new Catholic lay movements such as Focolare, Communion and Liberation, the Neo-Catechumenal Way, and the Community of Sant’Egidio—groups that are associated with Vatican II Catholicism, and that are seen as harbingers of hope and alternative models of community following the epochal institutional failures of the abuse crisis.

The way Francis has addressed these post-conciliar movements is different from how his predecessors did. One the one hand, his pontificate has initiated a policy of stricter control by the Vatican compared to the previous fifty years. Beginning in 2019, after reports of abuse in certain movements came to light, Francis either shut down the local groups in which the incidents occurred or required them to initiate a process of internal reform. That same year, the Vatican dicastery that grants official recognition to international Catholic lay movements and organizations (led since September 2016 by U.S. Cardinal Kevin Farrell) ordered all groups to develop detailed child-protection guidelines and norms for handling allegations of the abuse of minors and vulnerable adults. In June of this year, a decree from the Vatican Dicastery for the Laity imposed strict rules for the governing bodies of ecclesial movements under its jurisdiction. All of this should be seen in the context of this papacy’s greater overall degree of involvement in the activities of new movements and communities, such in the cases of the Community of Bose in Italy and of Communion and Liberation. Francis’s relationship with new ecclesial movements is hands-on; he will likely be remembered differently by organizations who expressed such enthusiasm for the advocacy of John Paul II and Benedict XVI.

On the other hand, this hands-on approach—greater oversight and regulation, blunt speeches warning of the risk of becoming cults and losing the charisma of the founder—also reveals an insider’s understanding of and relationship to the movements. Francis isn’t afraid of getting involved with their business because he knows them better than his predecessors did. He’s also theologically closer, as a nonacademic, to their spiritual and mental form: Christianity experienced and expressed through action and community life more than through intellectual, speculative reflection. This is connected as well to how Francis understands two elements often seen as dialectic in Catholicism: institution and movement. Far from being characteristic of a nineteenth- or twentieth-century liberal Catholicism, Francis’s relationship with modernity—theological, social, and political—is actually closer to the critical view that the ecclesial movements articulated between the interwar period and the post–Vatican II period, and further from that of activist movements like We Are the Church, for example, which advocates for a democratization of the Catholic Church, optional celibacy for the clergy, and the opening of all ministries to women.

If John Paul II could be seen as the pope for the movements, then Francis instead is a pope coming from the movements.
sharetweet

If John Paul II could be seen as the pope for the movements, giving them almost total freedom as long as they were theologically orthodox and obedient to the papacy, then Francis instead is a pope coming from the movements—or at any rate from a movement-like idea of the Church. This is clear not only from his speeches to popular movements in Latin America, but also from his ecclesiology. Just like the new ecclesial movements, Francis is more interested in spiritual renewal of the Church than in the reform of ecclesiastical structures; he has a utopian and radical view of the role of the Church in the public square; and he has a deeply political but not partisan understanding of the role of the Church on social issues. He is very aware of the possibility of spiritual manipulations within the movements and talks about clericalism as if he were a member of a lay movement and not the bishop of Rome.

Nor has been afraid of taking sides in intra-movement disputes and controversies, which have become more frequent with the transition from the first generation of movement founders to the second generation of leaders. In such cases, Francis tends to align himself with the spiritual and religious wings—which have typically expressed greater closeness with him—rather than the political and partisan elements, which regard him lukewarmly at best.

An instructive example is his relationship with Communion and Liberation (CL), the Italian-born movement generally understood to be on the conservative end of Italy’s ecclesial and political spectrum. Long before becoming pope, Jorge Bergoglio drew from the writings of CL founder Fr. Luigi Giussani, who emphasized the existential element of Christianity over ethics and doctrine; this complemented in a crucial way Bergoglio’s understanding of and references to Jesuit spirituality and the Latin American Catholic tradition. (At the same time, he also was making connections with the CL community in Argentina.) Bergoglio shared many intellectual points of reference with Giussani—among them, Romano Guardini, Henri de Lubac, and Hans Urs von Balthasar. He published articles in which he reads Giussani through the lens of Augustine and Charles Péguy. On coming to Rome as a bishop, Bergoglio was able to resume contact with his friend Fr. Giacomo Tantardini, who led the Roman CL community until a falling out brought on by his disenchantment with the group’s growing politicization and efforts to build an American-style Religious Right in Italy. Since his relationship with CL began before 1989, Bergoglio was involved before many of its leaders and members converted to the neoliberal gospel of Silvio Berlusconi. Now, some three decades later, it seems that Francis’s papacy has recovered elements of CL that were more visible prior to its political shift, when CL was more oriented toward a popular and social alternative to Marxism and to the liberal-technocratic culture coming into fashion on the political Right in the 1990s. This aspect of Francis’s intellectual biography is often overlooked, since the mainstream media in Italy today sees CL simply as a conservative Catholic movement. But Francis, both before and since becoming pope, has held onto the radical, social, and popular threads that CL itself dropped in the early 1990s. He is not a conservative in disguise, but rather has lengthy and deep affinities for the intellectual elements of CL and of other new ecclesial movements, along with a certain “personal” connection stemming from his post-conciliar experience of the institutional Church.

Francis’s pontificate and his relationships with new ecclesial movements say several important things about the evolution of those movements and of the papacy itself. First, Francis’s robust policies on the movements apply mostly to those organizations that have been recognized by the Church. In continuity with his predecessors, he is also keeping at bay those movements pushing an agenda of internal structural reform (including but not limited to women’s ordination). This also says something about the kind of synodal process Francis has in mind. Francis isn’t looking to resolve the liberal-versus-conservative battle, but rather trying to manage the disputes in the centrist camp. The aim is to distance the papacy and the magisterium from the ideological right-wing culture that has found a haven in some ecclesial movements. Francis represents a non-liberal Catholicism but also opposes illiberal, reactionary, “militant Catholic” denunciations of modernity. He endorses Catholic movements that are nonpartisan and non-reactionary, and that are more social and spiritual. Francis’s pontificate should thus be seen as key in that it represents a pastoral centrism versus the “extreme centrism” that puts Catholicism at the center of the world and posits it as the only solution for the ills of secular modernity. This is a much more complicated picture than “Catholic Left vs. Catholic Right.”

Second, in the evolution of Catholicism from an institutional, state-like organization, the papacy itself has acquired theological and ecclesiological elements of new movements—not just in terms of church-world relations, but also in terms of the internal balance of the Catholic Church. Francis has reinterpreted the papacy in a movement-like fashion, but he also has reinterpreted the movements outside of their European-political framework and in a global perspective. On the other hand, with his interventionist policies in the internal life of these lay organizations, Francis has taken sides in the competition between different political cultures within them. He’s also done so at a crucial time, in response to involvement of these groups in the abuse crisis and in the transition to the new generation of lay leaders.

Third, the Catholic Church, on its way to a less institutional and less clerical outlook, will continue to rely on lay movements as elements in a global community. This means that the relationship between the institutional Church and the movements is no longer to be understood in terms of “the pope handling the movements,” but rather as movements shaping the culture of Church leaders, including the pope. John Paul II and Benedict XVI often endorsed the movements, protected them from interference by the bishops, and pushed back against accusations from some cardinals that they were creating “parallel churches” (see, for example, the Bishops’ Synod of 1987). Francis represents an evolution in the relationship between the papacy and the movements. His dealings with the bishops and the cardinals are more typical of an anti-institutional, movement-minded Catholic than of a fellow-member of that clerical elite. In some sense, the American and clerical opposition against this pontificate recalls the strong tensions between the episcopate and the new ecclesial movements up through the late 1970s.

Pope Francis has emphasized the image of a “Church which goes forth” outside the sacristies and chanceries. He has also become a player in the largely overlooked internal struggle over the meanings of “going forth” embodied by Catholic lay movements, none of which happen to be reflective of twentieth-century liberal-progressive Catholicism, and which have more of a role on the Vatican stage than they once did. The controversies over the meaning of Francis’s pontificate mirror the intellectual and power struggle within centrist and conservative lay groups, a struggle that unfolds inside the Vatican power structure, but in ways that are more subtle than those of conservatives with their media campaigns and cardinals with their dubia. Trying to understand the ongoing battle for the future of the papacy and of Catholicism without looking at the internal debates within new lay movements would be another, unconscious form of clericalism.