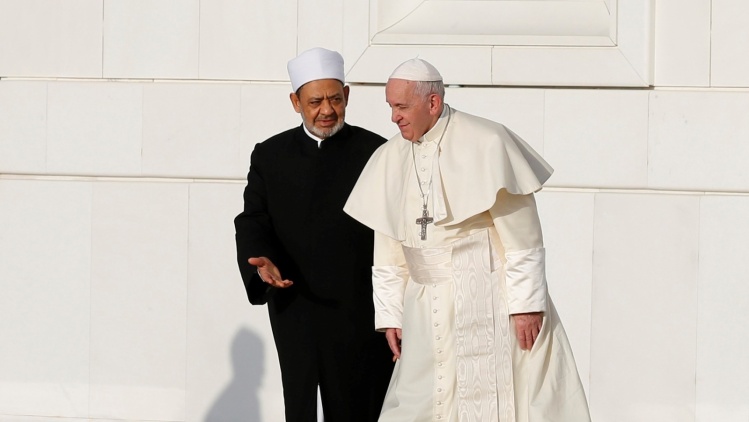 Alt-right Catholic media outlets are once again condemning Pope Francis, this time for what is supposedly a false portrayal of his namesake saint in the new encyclical, Fratelli tutti. In doing so, they overlook that Francis is following the same path as his predecessor Pope Emeritus Benedict XVI, whom they very much favor.

The pope uses a historical event—the 1219 encounter between St. Francis of Assisi and Egypt’s Sultan Malik al-Kamil—as the foundation for an encyclical advocating “social friendship,” a transcendent love directed toward overcoming societal barriers that are the source of much human misery. The historical record shows that the saint traveled to Egypt in the midst of the Fifth Crusade and, during a break in the fighting, went to the sultan’s camp to preach to him. He was received warmly.

Pope Francis starts with that incident because it exemplifies the saint’s model of “openness of heart, which knew no bounds and transcended differences of origin, nationality, color or religion.” This is what we need if we are to clear away “dark clouds over a closed world”—not the vilification of Muslims and other groups, which draws huge numbers of viewers to alt-right Catholic websites.

Benedict likewise saw hope in St. Francis’s meeting with the sultan, and framed the encounter in a similar way. In a general audience held on January 27, 2010, he said:

I would like to highlight this episode in St Francis’s life, which is very timely. In an age when there was a conflict underway between Christianity and Islam, Francis, intentionally armed only with his faith and personal humility, traveled the path of dialogue effectively. The chronicles tell us that he was given a benevolent welcome and a cordial reception by the Muslim sultan. It provides a model which should inspire today’s relations between Christians and Muslims: to promote a sincere dialogue, in reciprocal respect and mutual understanding.

He referenced a section of the Vatican II document Nostra aetate, which declared the Church’s esteem for Muslims and called for better Christian-Muslim relations: “Since in the course of centuries not a few quarrels and hostilities have arisen between Christians and Moslems, this sacred synod urges all to forget the past and to work sincerely for mutual understanding and to preserve as well as to promote together for the benefit of all mankind social justice and moral welfare, as well as peace and freedom.”

“Francis did not wage a war of words aimed at imposing doctrines; he simply spread the love of God.”
sharetweet

Benedict cited St. Francis frequently during his papacy, and before that took a scholar’s interest in him as well. In 2002, the then-Cardinal Joseph Ratzinger wrote in the Italian journal 30 Days that the saint radiated the “splendor of peace” in a way that “convinced the sultan and can truly tear down walls.” He continued: “If we as Christians set out on the way of peace in the example of St. Francis, we must not be afraid of losing our identity: it is precisely then that we find it.”

In the same article, Ratzinger also wrote that St. Francis was opposed to the Crusades. He “understood that the Crusades were not the right way to defend the rights of Christians in the Holy Land.” Academic historians have mostly doubted that St. Francis opposed the Crusades because there are no documents in which he directly states his opposition. But of course, it is unlikely that the medieval hagiography designed to depict St. Francis’s holiness would cast him as disapproving of the popes’ wars—evidence of heresy at the time. Beyond that, there is a great deal of circumstantial evidence to support Ratzinger’s view that the saint was quietly opposed to the Crusades.

The alt-right take found at websites such as Church Militant and LifeSite News is that Pope Francis falsified the encounter of saint and sultan in Fratelli tutti by indicating the Poverello did not approach the sultan with the intent of converting him. But this is not what the pope meant when he wrote that “Francis did not wage a war of words aimed at imposing doctrines; he simply spread the love of God.”

The key word there is “imposing.” St. Francis approached the sultan in peace—not with verbal warfare—and without a hint of coercion. Yes, he went to the sultan to preach the Gospel, but he did not force it on anyone. As Pope Francis writes:

That journey, undertaken at the time of the Crusades, further demonstrated the breadth and grandeur of his love, which sought to embrace everyone.... Unconcerned for the hardships and dangers involved, Francis went to meet the Sultan with the same attitude that he instilled in his disciples: if they found themselves “among the Saracens and other nonbelievers,” without renouncing their own identity they were not to “engage in arguments or disputes, but to be subject to every human creature for God’s sake.” In the context of the times, this was an extraordinary recommendation. We are impressed that some eight hundred years ago St. Francis urged that all forms of hostility or conflict be avoided and that a humble and fraternal Francis did not wage a war of words aimed at imposing doctrines; he simply spread the love of God.

The pope is referring to a document called the “Earlier Rule,” in which the saint set out a code of conduct for his friars. The version we have dates to 1221, or shortly after St. Francis returned from the East. In it, he tells the friars there are two ways to approach Muslims: one is to preach the Gospel to them, and the other, the one that the pope refers to, is to live in peace among them.

Pope Francis’s critics would prefer a warrior Catholicism, while the pope is seeking the latter, more gentle way of communicating with our Muslim brothers and sisters: live the faith by Christian example. In his encyclical, Pope Francis urges an exit from the politics of a phony populism, favoring “the exercise of political love” instead. I have to think that his namesake saint, who repeatedly tried to avert warfare and the bitter disputes that lead to it, would approve.