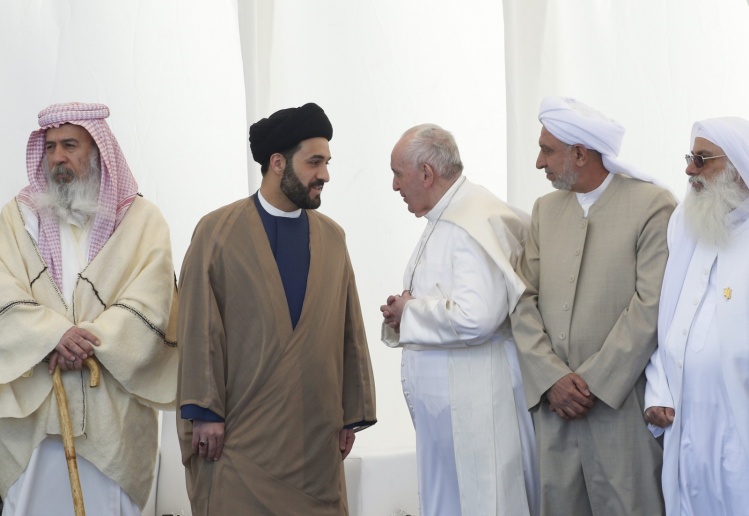 Pope Francis talks with a religious leader on the Plain of Ur near Nasiriyah, Iraq, March 6, 2021 (CNS photo/Paul Haring).

It’s easy to despair that the barriers dividing Christians and Muslims will never be overcome. But Pope Francis’s historic visit to Iraq this month offers the opportunity to imagine otherwise.

Consider that, not so very ago, even the phrase “the three Abrahamic religions” aroused condemnation from the Vatican. Louis Massignon, the great French scholar of Islam who often used it, was told that his views on the subject were “perilous and scandalous.” That was in 1961, and Massignon was fortunate that his friend Cardinal Giovanni Battista Montini intervened to protect him from what was then called the Holy Office.

Massignon died in 1962, but his friendship with Montini, who was installed as Pope Paul VI a year later, foreshadowed a new outlook on Catholic-Muslim relations, as Peter Hebblethwaite recounted in his 1993 book, Paul VI: The Modern Pope. We can tread that route with Massignon, with St. Paul VI, and with St. John Paul II to arrive at the Plain of Ur with Francis for his walk “in the steps of Father Abraham, who joins in one family Muslims, Jews, and Christians.”

In remarks that deserve to be pondered, Francis spoke eloquently of where that journey ought to lead:

The Patriarch Abraham, who today brings us together in unity, was a prophet of the Most High. An ancient prophecy says that the peoples “shall beat their swords into ploughshares, and their spears into pruning hooks.” This prophecy has not been fulfilled; on the contrary, swords and spears have turned into missiles and bombs. From where, then, can the journey of peace begin? From the decision not to have enemies. Anyone with the courage to look at the stars, anyone who believes in God, has no enemies to fight. He or she has only one enemy to face, an enemy that stands at the door of the heart and knocks to enter. That enemy is hatred.

“Anyone with the courage to look at the stars, anyone who believes in God, has no enemies to fight.”
sharetweet

By traveling to the Biblical land of Abraham’s birth, Pope Francis has fulfilled one of St. John Paul II’s unmet dreams. According to Francis, John Paul wept at his inability to travel to the Plain of Ur in 1999 for the start of what would be a jubilee year pilgrimage in 2000 to the Holy Land. The prayer service Francis held March 6, seated on a sunny, breeze-swept stage set against a parched plain, owes much to the World Day for Peace that John Paul II held in Assisi in 1986.

Yes, we are seeing the Second Vatican Council at work, creating the change the council fathers hoped for in their document Nostra aetate, in which the magisterium parted from centuries of officially stated contempt to express respect for Muslims and for their religion:

The Church regards with esteem also the Moslems. They adore the one God, living and subsisting in Himself; merciful and all-powerful, the Creator of heaven and earth, who has spoken to men; they take pains to submit wholeheartedly to even His inscrutable decrees, just as Abraham, with whom the faith of Islam takes pleasure in linking itself, submitted to God.

For Catholics, these words “are the Magna Carta of Muslim-Christian dialogue,” as Pope Benedict XVI put it, making it imperative for Muslims and Christians to engage with each other. Despite leadership from all the popes since Vatican II, this effort continues to face headwinds within the Church, opposition from traditionalists who haven’t accepted the teachings of the Second Vatican Council.

In the United States, we’ve seen a good deal of overlap between a well-funded, traditionalist Catholic media and far-right and anti-immigrant groups that seek to miscast Islam as an inherently violent religion. Too many Catholic organizations have given a platform to anti-Islam polemics.

But today, the news from Iraq is good news, as it so rarely is. The guiding spirit the council summoned in Nostra aetate has been working in the Church. Muslim leaders, most recently Grand Ayatollah Ali al-Sistani, the Shi’ite cleric who met with Francis, are responding or have initiated important interreligious efforts. As Pope Francis said from the Plain of Ur, “Father Abraham, who was able to hope against all hope, encourages us.” 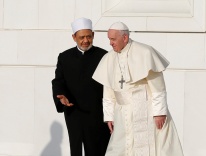