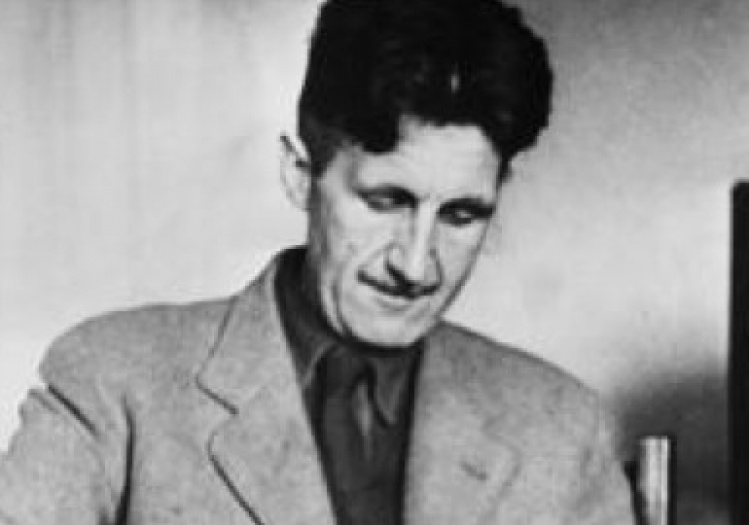 Probably the most astonishing feat of editing a notable literary figure from the last century is Peter Davison’s edition of George Orwell’s works. Completed in 1998, its twenty volumes run to nine thousand pages; eight volumes contain his novels, with the remainder made up of essays, reviews, and letters. From the roughly seventeen hundred letters Orwell wrote, Davison has now made a generous selection, annotated with insight and without pedantry, presented in a volume that will go some way, he hopes, toward “offering the autobiography that Orwell did not write.”

The tale told by these letters, especially in their latter stages, is a gripping one. Orwell died of tuberculosis in a London hospital in 1950 at age forty-six, just after the publication of Nineteen Eighty-Four, the novel that would make him famous. “He fled from triumph,” remarked one of his biographers, and the last triumph he managed to avoid was a book that would never thereafter be out of print. Short of cash for most of his life, at his death he possessed the equivalent, in today’s currency, of 250,000 pounds.

One of the many virtues of this selection is its inclusion of a number of letters by Orwell’s wife Eileen O’Shaughnessy, who, in a horrible mischance, died in 1945 at thirty-nine while under anesthesia for a hysterectomy. While Orwell only occasionally fashions a good piece of wit in his letters—as when, apropos of a book about human knowledge by Bertrand Russell, he declares it ‘‘the sort of thing that makes me feel that philosophy should be forbidden by law”—Eileen’s letters, whether to her husband or to her friends, are often delightful, with plenty of spirited energy and irony. She is good on the frequent absurdities of their married life, especially during the years they occupied a rustic cottage in a town called Wallington. Not long after they were married, she wrote to a friend that her husband “has just come in to say that the light is out (he had the Aladdin lamp because he was working) and is there any oil (such a question)...and he is hungry and wants some cocoa and some biscuits and it is after midnight and Marx [the dog] is eating a bone and has left pieces in each chair and which shall he sit on now.” In another letter to the same friend Eileen notes quarreling bitterly with Orwell after he complained—when they’d been married one week—that “he’d done only two good days’ work out of seven.”

The selection of letters begins more or less in 1934, the year Orwell published his first novel, Burmese Days. After some years in the public service in Burma, he turned to reporting on drudgery in a Paris restaurant kitchen and the vicissitudes of picking hops in England: the result was his on-the-spot book of observations Down and Out in Paris and London. It would be followed by an account of the life of coal miners in England’s North (The Road to Wigan Pier) and of serving in the Spanish Civil War in a volunteer brigade (Homage to Catalonia). His literary efforts from the mid-1930s, A Clergyman’s Daughter and Keep the Aspidistra Flying, were not very successful (he would later disparage them), but he also wrote memorable essay-vignettes like “A Hanging” and “Shooting an Elephant.” These items have been written about extensively in books about Orwell, and the letters provide little in the way of further revelations. What they do get across is the single-mindedness of Orwell’s commitment not only to being a writer, but one with a political purpose—“a desire,” he confessed in a late essay titled ‘‘Why I Write,” “to push the world in a certain direction, to alter other people’s ideas of the kind of society they should strive after.”

During World War II, his insistence on being such a writer led him to spend two years at the BBC, where he wrote 105 English-language newsletters for India (he later decided they were a waste of time). He came to believe that he wasn’t really a novelist, and he would not find his true fictional voice until Animal Farm in 1945. His most human, nonwriterly self is shown in his love and concern for Richard, the child he and Eileen adopted in 1944, just about a year before she died. After her death he approached more than one woman, proposing marriage: “I have hundreds of friends but no woman who takes an interest in me and can encourage me,” he wrote rather pathetically to one of them, asking whether she would like to be “the widow of a literary man.” The recipient, Anne Popham, had no interest in such an arrangement, and not until he was close to death did he marry Sonia Brownell in his hospital room at University College Hospital in London.

The novelist Anthony Powell, who visited Orwell in the hospital, wrote some shrewd pages about him in his memoirs, To Keep the Ball Rolling. Powell, adducing Orwell’s severe, ascetic attitude toward life, suggested that he could thrive only in “comparative adversity.” Another friend from his later years, Julian Symons, recalls regular wartime lunches with Orwell, Powell, and Malcolm Muggeridge. Rationing had made the food choices rather limited and less than delectable, but Symons remembers Orwell ordering some synthetic concoction called the Victory Pie and declaring without irony upon finishing it, “You can’t do better than this.”

A number of these letters disclose Orwell’s literary preferences and loyalties. One of his favorite English novelists was George Gissing, whose dark chronicles of adversity and poverty in London and elsewhere struck a chord; believing that Gissing had never had his due, Orwell wrote an essay on behalf of the novels. In the same letter where he announces his plans to write such an essay, he says that he has been having another try at Henry James, but simply doesn’t care much for him. His great essay on Dickens is a classic; but less well known is a letter, written near the end of his life, containing a couple of astute paragraphs on Joseph Conrad (on whom he also hoped to write an essay) calling him “one of the best writers in the century.” He picks out The Secret Agent, Under Western Eyes, Nostromo, and Victory as Conrad’s best work; about Lord Jim he complains that no one “could possibly talk like this or at such length.”

The Conrad essay, as well as one he wanted to write on Evelyn Waugh, was not to be, nor was a plan to go to Switzerland in hopes of improving his declining health. Orwell was a very sick man by the time he finished rewriting and typing Nineteen Eighty-Four—much of the work done in bed and, as Davison points out, with a mechanical typewriter and the accompanying carbon copies. Rereading Nineteen Eighty-Four, as I have just done, with the picture of a desperately ill man behind the words, has increased my admiration for that strong, imperfect, painful novel. He died, our editor notes, with “his beloved fishing rods standing in the corner of his hospital room.” Malcolm Muggeridge arranged for a funeral, not a memorial “celebration of a life” as today’s jargon has it. Rather than choosing to be cremated, which one might expect to have been his no-nonsense choice, he was buried, his headstone reading—with his given name, rather than his literary one—“Here lies Eric Blair,” and the dates of his birth and death. To the end and after he remained nothing if not an individual, fleeing from triumph.