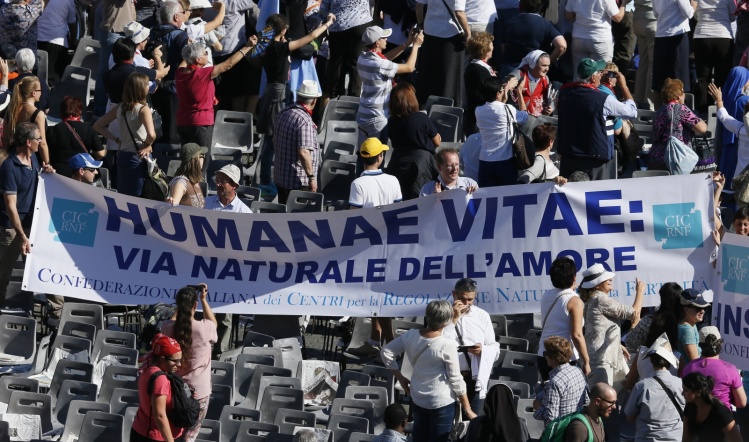 We would like you to know that the Catholic Church exclusively teaches the use of Natural Family Planning when making decisions and taking action about responsible parenthood. We recommend you find an instructor and learn the methods. There are brochures at the front of the church with more information.”

This was pretty much the sum total of the guidance my fiancé and I received from the parish priest  two weeks before our wedding day in 2011. He was sorry that our church did not have any classes, but he was sure we could figure something out. To be honest, I couldn’t tell whether “something” meant that he assumed we’d resort to artificial birth control or to getting pregnant on our honeymoon.

Actually, I already knew about responsible parenthood, thanks to NFP instruction I’d received from a couple whose children I’d babysat throughout college. They were the official instructors for the diocese in which I attended school, and when they found out I was engaged, they simply insisted on teaching me.

Though I was initially skeptical (there was the over-the-top enthusiasm common to NFP devotees, the language that had the feel of a hard sell: it was always described as “beautiful” or “holy” or “the best thing that ever happened to our marriage”), I ended up finding the information valuable. I was struck by what they were able to say about the body’s ancient, internal wisdom and their knowledge of the nature of fertility. I wondered why this kind of information about my body’s own readily observable patterns hadn’t been presented to me earlier—or at any point—in the first two decades of my education.

On the other hand, I didn’t wonder much at all about the absence of the words “Humanae vitae” in those same decades of schooling. The fact is, few people of my generation think much about this fifty-year-old encyclical—even on the fiftieth anniversary of its promulgation. There’s a vague notion about its reinforcing Catholicism’s injunction against artificial contraception, but it doesn’t generate the guilt, turmoil, thoughtful argument, or impassioned debates it did for the generation that came of age during the Second Vatican Council.

But don’t accuse the millennial generation of apathy. It’s just that very few of us were formed by our parents’ generation in such a way as to participate in, or even care about, this debate. We weren’t presented with “two sides” of a controversial issue, but with the values our parents adopted after their own long-fought debate. They made up their minds, and then they raised their children accordingly.

For example, I have peers who were on birth control by middle or high school. Their parents advised not abstinence, but safe sex. This wasn’t a concession to or acknowledgment of the sexual activeness of their kids; this was a handing down of a new doctrine, one rooted in assent to scientific authority, belief in medical solutions, and rejection of what they perceived to be antiquated sexual mores. Other friends, recipients of a different doctrine, began charting and tracking their cycles upon engagement, waited to have sex until marriage, and—understanding child rearing as an integral aspect of their vocation to marriage—typically didn’t try too hard to avoid pregnancy within the first year or two.

I don’t know that my generation is adrift in the celebration of casual sex. But I do know that the instruction we received came without much explanation from parents, and with little guidance from clergy.
sharetweet

Yet if the debates and disagreements over Humanae vitae are not my generation’s, we’re nonetheless living with some of the issues the encyclical raised regarding the potential consequences of birth control. Adultery; committed relationships; a worldview that prioritizes pleasure as the purpose of sex, with mutual love, intimacy, and procreation as secondary concerns—as adults in or thinking about long-term relationships or planning marriages or starting families, we’re inevitably wrestling with all of these things. Just not in the context of a 1968 encyclical.

But I have been wondering lately if my generation’s concerns around the issues Humanae vitae raises may simply look different. They appear not as the latest iteration of the same decades-long debate, but as a genuine willingness to learn more about the upsides and downsides of different approaches to birth control and family planning. Peers on either side inquire about the methods, the science, the effects, the frustrations of the other; they want to know what’s natural and what’s practical.

A friend of mine (not Catholic) who recently gave birth admitted to me in hushed tones that she wasn’t planning to go back on the pill after breastfeeding. Her experience of pregnancy opened her eyes to the internal logic of the female body: without having to instruct or command it, a complex process allowed her to conceive, feed, grow, and nurture the baby for forty weeks in utero, and to continue doing so through breastfeeding after the birth.

Another friend (also not Catholic) brought up the Glow app to a few close friends. “It’s like biohacking for female fertility,” she explained—“biohacking” (a term I promptly looked up) referring to the various ways we can track personal health, like pedometers to count our steps, Fitbits to clock our sleep, or monitors to measure our lung capacity. Here’s a description of Glow from the iTunes store:

Glow is the world’s best ovulation app and fertility tracker. Glow’s menstrual and ovulation calculator helps women learn about their fertility, whether avoiding or attempting pregnancy. Glow is also a period tracker that records your mood, symptoms, sex, and medications; it also predicts your fertility and assists those undergoing fertility treatments like IVF or IUI. Winner of 2014 Webby for best Health & Fitness app, Glow is an elegant, data-driven ovulation calculator & fertility tracker designed to help you take control of your reproductive health.

Elegant. Data-driven. Glow, as it turns out, is nothing more than NFP, but with good branding (never Catholicism’s strength) and without the doctrinal baggage.

Other peers wonder about personal integrity and the sacrifices we can or can’t ask of others. Is it required, or even appropriate, to ask a non-Catholic partner to practice a natural birth-control method? And what about this same concern, but in the context of a premarital sexual relationship?

Girlfriends of mine are coming to grips with the fact they’ve been on hormonal supplements for most of their lives—a decade or more, often—and confess an urge to quit, even if to take up the use of condoms (an artificial birth-control method, admittedly, albeit without synthetic and chemical hormones to ingest). It’s talked about like a kind of detox. In an era of juice cleanses and organic-grass-fed-everything, there’s a kind of consistency in seeking out more “natural” methods of family planning.

And then there are the friends who, after years of practicing NFP, now talk about its challenges. They confide about the inherent difficulties, admit that it’s messy and frustrating and not the beautiful marriage-saver they were told it would be.

In the introduction to Commonweal’s special issue on the fiftieth anniversary of Humanae vitae, Paul Baumann wrote:

Where once Catholics thought carefully—indeed agonized—about sexual decision-making in ways that shaped the most important relationships in their lives, many younger Catholics, deprived of guidance from adults, found themselves adrift in the popular culture’s celebration of casual sex.

I don’t know that my generation is adrift in the celebration of casual sex. But I do know that the instruction we received came without much explanation from parents, and with little guidance from clergy. Yet we are finding our way. I’m struck by whispers of genuine curiosity and genuine frustration among my peers, who were raised according to the stances their parents took but without much information about why they took them. Even if Humanae vitae itself is not our debate, the topics it confronted—and its consequences—are a part of our conversation.

It's Raining in Minnesota