On audacity, history, and Jean-Luc Godard
By Colin Westerbeck Jr.
Movies
Arts
History
From the Archives 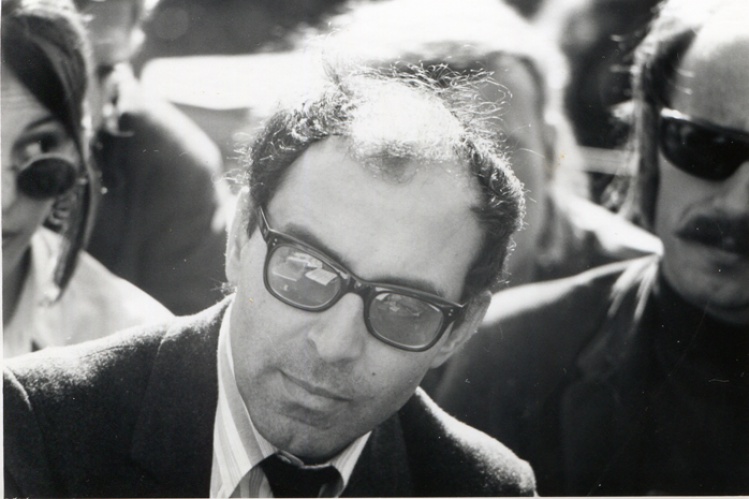 This essay first appeared in the November 21, 1980 issue of Commonweal.

In Jean-Luc Godard’s Contempt (1963), the characters at one point enter a screening room on whose wall is inscribed a quotation from the movie pioneer Lumière: “The cinema is an invention without a future.” Little by little over the past ten years, I have come to agree. Godard’s own career has provided a kind of frame around my gradual, grudging capitulation to Lumière’s point of view. When I first decided to write about movies, it was Godard’s work that made me feel the necessity of doing so. Going to his films throughout the sixties was what made moviegoing seem that important. Yet at the very moment I began to write, Godard himself was losing interest. Politics was taking precedence over movies in his life and would soon eclipse them altogether, nearly eliminate them from his activities, as he went to live in a commune where his only filmmaking was a little experimentation with video. In his way Godard was doing what so many of the best filmmakers have done: repudiating his own best work, talking himself out of movies, which thereby became, once again, an invention without a future.

As I was explaining in my previous column, my attitude toward movies had about touched bottom when it again came time to attend the press screening for the New York Film Festival this fall. I was at the point where almost the only thing that could have restored my faith in movies would have been for Godard himself to come back from the dead. And this, with the American premiere of his new Every Man for Himself, was exactly what happened.

The astounding thing about the film is how familiar and accessible it seems. It is as if Godard’s ten-year absence from filmmaking has not been an absence at all, but just a brief period when we left the room. Now we are able to come back and pick up the threads of what he is saying with no difficulty. One reason this seems surprising is that the film clearly grows out of his recent thoughts and activities about which we know nothing. It is a self-consciously autobiographical film, for the central character is named Paul Godard (Jacques Duytronc) and the concerns of other characters, are also very close to Godard’s own. Denise (Nathalie Baye), for whom Paul has left his family, wants to leave the city but can’t decide what to do with herself if she does leave. This was very much the situation Godard was in ten or so years ago when he wanted to get away from Pads and decided to go live in the more provincial, rural Clermont-Ferrand district. What Godard finally found to pass the time was, as I said, video. That preoccupation shapes this film, too. The most innovative thing about the film is a use of stop-motion/slow-motion photography of the sort to which videotape has accustomed us through the instant replays of sports events on television.

Godard’s style was so audacious that it changed the way we thought about movies. Having at first been the rarest poetry, it became part of the fundamental grammar of movies.
sharetweet

When I say that Every Man for Himself seems familiar, I don’t mean that it seems easy. It is a demanding film, as all Godard’s have been. Beyond interrupting itself by atomizing the action with slow-motion shots, the whole movie seems to be a process of interruption. Along with the story of Paul and Denise, the film contains the story of a prostitute named Isabelle (Isabelle Huppert) whose life crisscrosses but never quite touches Paul’s. (In the final scene a car containing Isabelle’s sister and a pimp hits Paul as he is arguing with his wife in the street.) Yet the way that the film constantly leaves one character’s story half untold and jumps to somebody else’s is one of the things that gives us the sense of deja vu we have while watching it. The use of such abrupt, choppy, disconnected narratives is the technique which Godard himself developed and was known for in the sixties.

Part of the reason it is possible for us to come back readily to Godard’s sinuous, elliptical style of filmmaking after so long an absence is, we realize, that that style has had an enormous impact on all the movies we see. It has percolated down through the whole of film culture. It has powerfully affected not only American filmmakers who have great originality of their own, such as Altman, but a whole generation of imitators and popularizers. Twenty years ago Godard’s style struck us as an audacious kind of poetry, a polemic, a new rhetoric in which to argue about how movies should be made. It was so audacious that it changed the way both filmmakers and audiences thought about movies. Having at first been the rarest poetry, it became part of the fundamental grammar of movies.

If Every Man for Himself reminds us how influential Godard has been, it also reminds us of his own earlier career, and of the history of the movies in general. It has that uncanny ability his films always seem to possess of bringing the whole history of the movies into the present. The films from his own past to which this one seems to allude are Vivre sa vie (1962) and, more strongly still, Two or Three Things I Know About Her (1966). Both those films are about prostitutes like this one. Like Vivre sa vie, the new film is divided into numbered, titled sections, and like Two or Three Things, it makes us feel the prostitute’s role as an almost allegorical one, a depiction of the culture at large. Even the most novel and contemporary aspect of the new film, the video-like use of slow motion, seems at the same time a backward glance.

Godard has tried to bring history itself to consciousness, to raise both the making and watching of movies to a new level of awareness.
sharetweet

Among other things it is a reflection on the fact that the precursors of movies were, paradoxically, attempts to freeze motion rather than create the illusion of it. They were the experiments of the nineteenth-century Frenchman Marey, and of Eadweard Muybridge, who proved that there’s a point where a galloping horse’s hooves all leave the ground. Both these photographers used stop motion as Godard does, in order to analyze and emphasize physical gestures. Keaton and Chaplin both had their films shot at variable speeds to enhance the effects of comedy or pathos they wished to create. And Eisenstein’s Battleship Potemkin used a kind of stop action/slow motion at certain crucial moments too. This was for Eisenstein both a way to project onto events a Marxist interpretation of history, a sense of determinism in the Potemkin mutiny, and a way to accustom the audience to his new ideas about film montage.

Eisenstein was of course another basic grammarian of film. When Godard talked during a press conference about his use of slow motion, the continuity between it and Eisenstein’s ideas about montage seemed obvious. Godard said that he only began to direct at the point where he started looking at the individual frames in different shots, trying to decide where to put the stops. Before that, he feels, there was only the writing, the script. To equate directing solely with editing this way is a very Eisensteinian notion. The implicit emphasis on structure in these remarks may seem odd for a filmmaker whose films were accused often of being wild and chaotic and having no structure of the usual, narrative sort. In Every Man for Himself Godard is trying, as always, to work intuitively, to do away with preconceived structures like plot, to be open to chance and improvisation. One moment where we can sense this is the final scene between Paul and Denise. They meet on a train platform, and as they talk an express comes through the station so that one of them has to quickly pull the other away from the platform’s edge. Godard doesn’t run his productions as if they themselves were railroads. It’s doubtful that he consulted the timetable in order to be sure a train would come through and occasion this little gesture of rescue. More likely is that the train took everyone, including the actors, by surprise.

But that would be precisely why Godard used it, why it fits. Moreover, it has a mysterious bearing on the film’s last scene, where Paul’s wife does not keep him from getting too close to the edge in a similar situation. She allows him to back into the street as they are arguing and be hit by a car. The only structure that Godard’s film has exists in connections like this between the scenes. That is the only structure his films ever have, one created through editing. Parallels of this kind carry the emotion from scene to scene in a film; and from Eisenstein to Hitchcock to Franfois Truffaut, such parallels have always been present, yet invisible in a way, hidden behind the plot. By tearing down plot, Godard attempts to reveal this other, associative structure underneath. Doing so has made his role in the history of the movies a rather Hegelian one. He has tried to bring history itself to consciousness, to raise both the making and watching of movies to a new level of awareness.

Every Man for Himself seemed to infuse a number of subsequent screenings at the festival with new life. It even made a seven-hour retrospective of Louis Feuillade’s 1918 serial Tih Minh fascinating to watch. There in Feuillade’s loose, aimless story and constant repetitions from one installment to the next were the raw materials from which Eisenstein and Godard were to fashion movie art. The whole history of the movies was so simple, really, and so thrilling when you thought about it. Maybe the movies didn’t have any future, as Lumière had said years before Feuillade began making films. What Lumière couldn’t foresee, however, is what an incredibly rich past the movies would turn out to have.

Colin L. Westerbeck Jr. is a writer and historian of photography. The author of numerous books on photography, Westerbeck spent many years as a film critic for Commonweal.