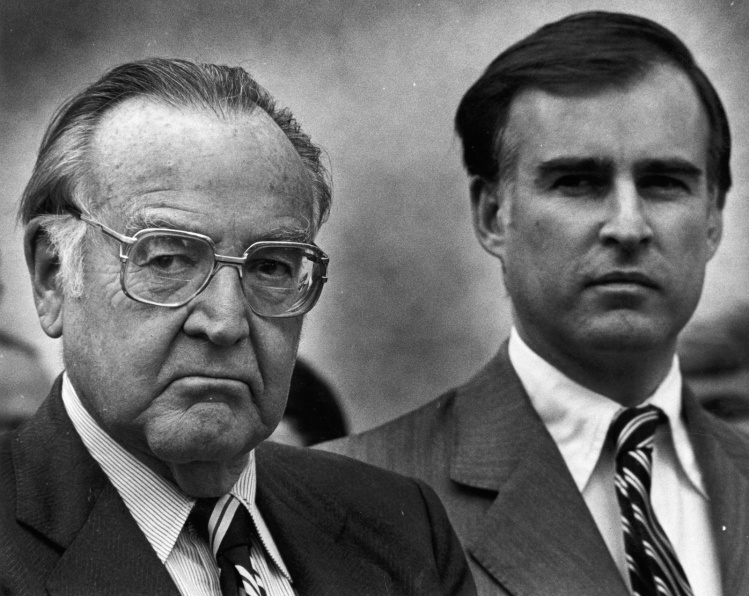 For most of human history, kinship was both the source and substance of political power. Except in a few out-of-the-way places like North Korea and Saudi Arabia, dynastic rule has now faded away, but it is nonetheless striking how important family connections remain in American public life. The Caseys of Pennsylvania (Robert, governor; Robert Jr., senator), the Cuomos of New York (Mario and Andrew, governors), the Daleys of Chicago (Richard J. and Richard M., mayors) are just a few of the names on the long list of America’s prominent political families. It may be misleading to describe these families as “dynasties” since most do not last more than two generations. Moreover, almost all of them remain closely tied to a particular city or region; only a few (the Kennedys and Bushes are the obvious examples) manage to succeed at the national level. Both these limitations are apparent in the remarkable careers of the Browns (Edmund J., known as Pat, and Edmund J. Jr., known as Jerry), the subjects of Miriam Pawel’s deeply researched and engagingly written book. The Browns’ political prominence, begun when Pat won his first election in 1943, will almost certainly end in 2019, when Jerry completes his fourth term as governor. Both father and son failed dismally when they tried to project their influence beyond the borders of their state. As the title of Pawel’s book tells us, the story of the Brown family is, above all, a California story.

For the Browns, California meant San Francisco, where Pat (in 1905) and Jerry (in 1938) were born and reared. Although “the city” prided itself on its cosmopolitanism (some even called it “the Paris of America”), pre–World War II San Francisco was an insular, provincial town. It was run by people who had known each other from childhood (my parents, members of Pat Brown’s generation, met in the first grade), went to the same schools (Lowell for Protestants and Jews, St. Ignatius or Sacred Heart for Catholics), belonged to the same clubs (Bohemian, Olympic, Family), and spent their summers on “the river” (Russian) or at “the lake” (Tahoe).

This small world, held together by a dense web of friendships and favors, was made-to-order for a man like Pat Brown. Smart, affable, and energetic, Pat had a natural politician’s ready laugh and long memory. By the time he was in high school (although a Catholic, he went to Lowell), his political aspirations were already apparent: he was elected president of no fewer than eleven student groups, having run for office, as he recalled, whether he was a member of the organization or not.

After establishing a modestly successful legal practice, Pat Brown patiently began to build a political base, calling on old friends, carefully cultivating useful allies, and joining every club he could. In his second try, he was elected district attorney in 1943, went on to be the state’s attorney general seven years later, and then became governor in 1958. After a successful first term, he soundly defeated Richard Nixon in 1962, the occasion for what many believed (and not a few hoped) would be Nixon’s final press conference; the former vice-president told the assembled reporters they “would not have Nixon to kick around anymore.” Pat’s popularity ebbed during his second term; in 1966, he was defeated by Ronald Reagan, the rising star in the conservative firmament.

Perhaps the most important source of Jerry Brown’s extraordinary success is his apparently inexhaustible capacity for self-invention.
sharetweet

Pat Brown’s political career ended in part because he had a run of bad luck, but mostly because the world of California politics was changing in ways he never truly understood. In an era of television, big money, and photogenic celebrities, the skills he had honed as an ambitious young lawyer in San Francisco were no longer enough. Pat, who went on to make a small fortune practicing law in Los Angeles, never quite recovered from his electoral defeat. From 1967 until his death in 1996, he had to satisfy his political appetites vicariously by observing, with a characteristically paternal mixture of affection, admiration, and perplexity, the changing fortunes of his third child and only son.

Jerry Brown needed special permission to attend his father’s inauguration as governor in January 1959. A seminarian at the Novitiate of the Sacred Heart, he was subject to the discipline that the Jesuits imposed on everyone who set out on the long and arduous path to the priesthood. Looking somber and somewhat out of place in his cassock, he had only a few hours with his family before returning to the novitiate’s strict routine. Jerry left the seminary a year later and would eventually drift away from the church. But for him (and, in a quite different key, for his father), Catholic values and rituals remained an important part of his identity, the starting point and an abiding presence in what would be a lifelong quest for a spiritual home. The Browns’ story is, among other things, a Catholic story.

Jerry was unlike his father in many ways: less amiable, more introspective, and less disciplined, he was not a natural politician. But the two shared both the capacity to inspire loyalty among those who knew them best as well as some core beliefs about the importance of public service, the evils of racial discrimination, and government’s obligation to protect society’s most vulnerable members. Above all, father and son shared an insatiable appetite for elected office. After a few fitful attempts to practice law, Jerry devoted more and more of his time and energy to campaigning, first for the Los Angeles College Board, then California Secretary of State, and finally, in 1974, for governor. After he was reelected by a substantial margin, Jerry’s popularity began to slip, in part because he could not resist the siren call of national politics, mounting a series of fruitless efforts to win the Democratic nomination for the presidency. In 1982, after deciding not to run for a third term as governor, he was defeated in a bitterly fought senatorial race. A year later, his somewhat quixotic attempt to restart a presidential campaign collapsed. Although he was just forty-five years old, it looked as though Jerry Brown’s political career was over.

Like his father, Jerry was the victim of some bad luck (for example, an infestation of the Mediterranean fruit fly and his very unpopular decision to delay combating it with a toxic chemical), as well as changes in the political climate. But here the resemblance ended: after a few years in the political wilderness, Jerry came back, slowly working his way up the electoral ladder until 2010 when he was, once again, elected governor; he was reelected with a nineteen-point margin four years later. Once the youngest governor in California’s history, he now became the oldest, a feat that is not likely to be matched any time soon.

Although written with the Brown family’s cooperation, Pawel’s book is not an authorized biography; she does not hesitate to point out, rather gently to be sure, her subjects’ faults and foibles, such as Pat’s highly profitable but unsavory connections to an Indonesian oil firm and Jerry’s stubborn refusal to abandon his doomed presidential ambitions. Overall, however, she provides a sympathetic and affectionate group portrait of the Browns, based on their own letters and diaries and on the testimony of more than seventy relatives and friends. Along the way, Pawel tells us a great deal about the issues that continue to confront the golden state—immigration, racial inequality, crime, water supply, environmental degradation—but her main subject is the complex interplay of public life and personal relationships within the Brown family. Considering their differences in character, temperament, and experience, and the incandescent intensity of their individual ambitions, the Browns managed to treat one another with an impressive amount of love and loyalty. Pawel argues that this was largely due to the influence of two remarkable women, Ida Schuckman Brown, Pat’s mother, and Bernice Layne Brown, his wife. The third remarkable woman in the Brown saga is Jerry’s wife, Anne Gust Brown, whom he married in 2005, just as the second act of his political career was getting under way. Unlike Ida and Bernice, she has been directly and actively involved in policy-making and deserves a good deal of credit for the accomplishments of her husband’s last two terms as governor.

Perhaps the most important source of Jerry Brown’s extraordinary success is his apparently inexhaustible capacity for self-invention. Like the California that he governed, he has been driven by a constantly changing vision of the future. This vision, it should be said, was not always clear and accurate, but in a career stretching across half a century, he has been more often right than wrong. For decades he has warned about the dangers of climate change and environmental catastrophe, and is now one of the most eloquent critics of the institutionalization of ignorance that characterizes so much of contemporary American politics. Jerry’s success depends on more than his commitment to prepare for a tomorrow that will not be like today. He has also been, as many of his fellow Californians have not, inspired by his awareness of the past’s enduring power, an awareness nourished by the spiritual values that he learned from the Jesuits, by his own broad and eclectic reading, and by his engagement with his ancestors, whose experiences have begun to play an increasingly important part in his public statements and private reflections.

Pawel begins and ends her book where the Browns’ own story began and apparently will end, in the rugged foothills of Colusa County where Jerry Brown’s great-grandparents first settled in the middle of the nineteenth century and to which he plans to return when he leaves office in January 2019. “It is nice,” the governor recently remarked, “to walk in the very footprints of your grandmother, and your great-grandfather.” The Browns always looked where they were going (often it was to the next election), but they never forgot where they came from.

The Browns of California
The Family Dynasty that Transformed a State and Shaped a Nation
Miriam Pawel
Bloomsbury Publishing, $35, 496 pp.