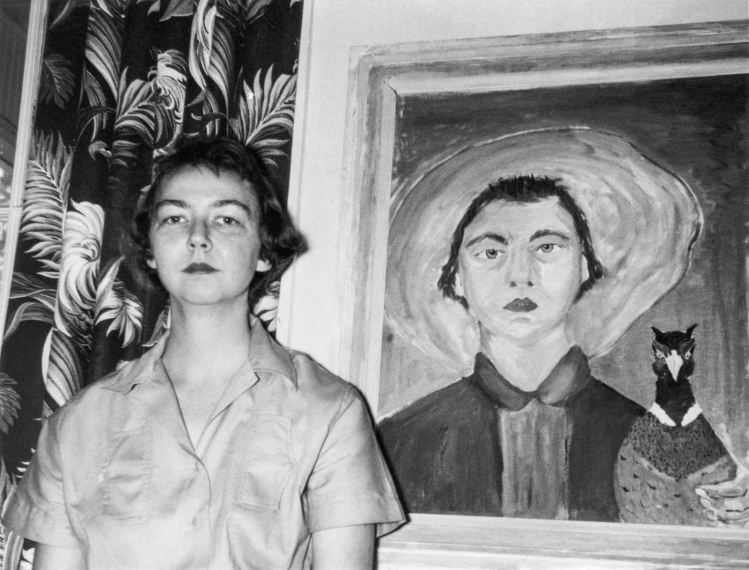 Flannery O'Connor stands next to a 1953 self-portrait of herself holding a pheasant. (Alpha Historica / Alamy Stock Photo)

In case of psychological stress, some people keep therapy dogs around for a comforting nuzzle, but I prefer a strong dose of Flannery O’Connor. I keep The Habit of Being, the 1979 collection of her letters edited by Sally Fitzgerald, on a shelf just above my desk, easily reached in an emergency. A couple of pages of O’Connor and I am chastened, enlightened, cracked up, or all three, able to carry on with a newly installed ramrod for a spine.

Long before the substantial biographies and studies began to appear, O’Connor’s letters revealed her to be ferocious in her Catholic faith and her many literary friendships, but also withering and funny in her judgments and her gossip. While the rest of her prose contains equal measures of wit and dead seriousness, the letters often reveal qualms and doubts. O’Connor seeks counsel of both the spiritual and the writing variety. Often—and more often, as she grows sicker—she asks for prayers.

Now we have this new volume of O’Connor’s “uncollected” letters (those who have read the earlier volume will recognize several reprinted here) alongside a trove of her correspondents’ letters to her and to each other. Since her circle included Caroline Gordon, William Sessions, Katherine Anne Porter, Walker Percy, and the writer identified in The Habit of Being as “A” (later revealed to be Betty Hester), this is an enticing volume for anyone anxious to hear O’Connor’s voice again or eager to experience her friends’ idiosyncratic voices. The juxtaposition can be exhilarating (though Caroline Gordon, who provides the volume’s title and lavished attention on O’Connor’s work, can also be mean-spirited and exhausting. As O’Connor confides to Hester, “[Gordon] will sacrifice life to dead form, or anything to grammar.”)  O’Connor’s advice to Hester is more concise: “If you were stupider you would write much better fiction because you wouldn’t conceptualize things so much.”

For O’Connor devotees, the new collection is essential—but not without its frustrations. The order is sometimes chronological, sometimes thematic, which can result in introductory notes explaining what a letter a few pages ahead will soon make clear. The annotations, frequently illuminating and helpful, often blandly summarize what the letter below will say better (and more wittily). The new collection’s editor, Benjamin B. Alexander, is currently professor of English and political science at Franciscan University of Steubenville. He pulls a vast array of references, allusions, and personalities into conversation, and his ability to keep them all talking to each other is impressive. But he sometimes drifts into anachronistic asides when discussing Southern historical contexts. Mel Gibson, for example, makes an appearance in a note explaining the Revolutionary War’s Francis Marion. Ronald Reagan frequently enters the notes, as does a rant on the state of today’s Democratic Party. Much as any discussion of O’Connor requires interdisciplinary approaches, surely the politics of the post-O’Connor era are far afield.

O’Connor’s variant spelling of CommonWheel is as charming as her misspelling of her own publisher.
sharetweet

The politics readers are interested in are O’Connor’s, and hers are complicated enough to keep us all awake at night without bringing Mel Gibson on the scene. If some of us are still recovering from the revelation that she refused to meet with James Baldwin and Martin Luther King Jr., it is useful to be reminded here of her support for the civil-rights stands of her friends Tom Gossett and Fr. James McCown. Her casually tossed racial pejoratives are excruciating, but just as her later stories show her to be deepening her vision and representations of race, the letters show her growing openness to the heterodox politics of two of her most intriguing and appealing correspondents, Fr. McCown and Roslyn Barnes. Both have personalities to equal O’Connor’s, and that’s saying a mouthful.

James McCown was a Jesuit and a Southerner whose readings of O’Connor pleased her. It is moving to see both sides of their conversation. The priest’s reverence for O’Connor’s art is beautifully balanced between his theological understanding of what she’s up to and his appreciation for her sense of drama. Her growing reliance on his spiritual advice yields the most touching letter in the volume: an inquiry into whether she had committed sacrilege by eating a vegetable that might have been cooked in ham stock on a Friday. “There is something about you can use drippings but you can’t use stock,” she tells McCown. “I hate this kind of question.” It is impossible not to imagine what the scrupulous O’Connor, who was not a fan of movements like the Catholic Worker, would have made of her correspondent’s growing immersion in liberation theology.

O’Connor urged McCown to write to Roslyn Barnes, a fellow Georgian who dedicated her master’s thesis to O’Connor and converted to Catholicism, training with Ivan Illich in Mexico for the missionary work she undertook in Chile (where she disappeared after O’Connor’s death). Her letters to O’Connor are intensely vital as she searches for the best use of her talents. She can be as tart as her mentor—she writes to McCown, “Nobody can play dirtier than religious, Father, when the devil gets into them”––but the letter she wrote to him after O’Connor’s death at the age of thirty-nine is filled with longing for a deeper connection. “Why didn’t any real intimacy happen? I don’t know…. F. invited me to see her—and then she kept her distance.”

If their letters are standouts, the competition is tough. Walker Percy’s objection in Commonweal to the tactics of the Berrigan brothers is one for the ages. And at the risk of again tooting this magazine’s horn, O’Connor’s variant spelling of CommonWheel is as charming as her misspelling of her own publisher. In the case of “Billy Ghrame,” she is absolutely consistent and clearly delivering a message.

We are in the midst of an O’Connor revival, graced with O’Connor’s recently released prayer journal as well as studies I believe she would have approved of: Richard Giannone’s Flannery O’Connor, Hermit Novelist, and Ruthann Knechel Johansen and E. Jane Doering’s comparative study of O’Connor and Simone Weil, When Fiction and Philosophy Meet. Good Things Out of Nazareth provides a different kind of pleasure. I open it at random to hear a familiar voice: “A Georgian cannot of course be against Coca Cola. We feed it to our babies, serve it to our guests, console the dying with it and expect it to make us loved throughout the world” and “[a] Catholic has to have strong nerves to write about Catholics.” I consider my psyche set straight and my spine stiffened.

Good Things out of Nazareth
The Uncollected Letters of Flannery O’Connor and Friends
Edited by Benjamin B. Alexander
Convergent Books, $26, 416 pp.