What Is a Journalist’s Role?
By Paul Moses
Media
Pope Francis
Donald Trump 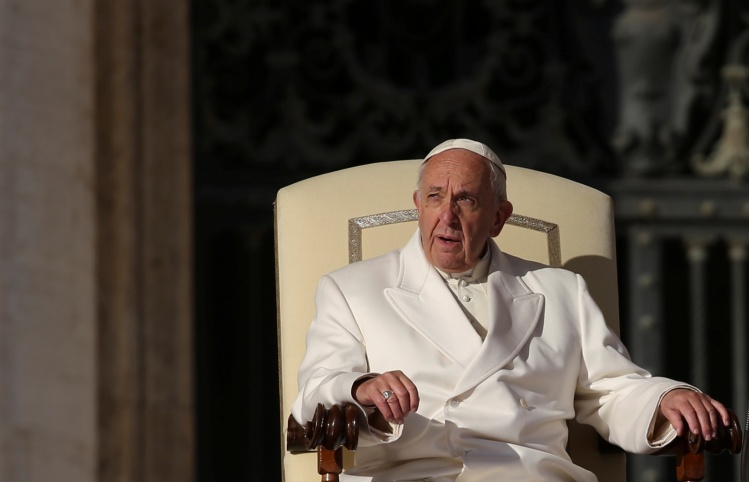 Pope Francis smiles as he leads his general audience January 24 in St. Peter’s Square at the Vatican. (CNS/Tony Gentile, Reuters)

If there is anyone in the world with the platform and standing to straighten out the meaning of the much-abused term “fake news,” it’s Pope Francis. Himself the subject of some fake news dispatches— “Pope Francis Shocks World, Endorses Donald Trump for President”—Francis took on a corrective task in his message for World Communications Day.

Although he doesn’t mention President Trump, Francis disentangled the phrase from how the president uses it. Trump has referred to “fake news” as “one of the greatest of all terms I've come up with”—his label for news coverage, almost always accurate, that he doesn’t like. The term didn’t originate with Trump, but he has so popularized the ”fake news” accusation that it’s deployed against news media around the world, often by authoritarian governments.  Were it not for Trump, it’s doubtful that the English words “fake news” would have been used in all seven languages in which the Vatican published the pope’s message.

As a journalist for some forty years, I am sorry to say that Trump has muddied the meaning of the term to the point that many Americans would apply it the way he does. The Gallup-Knight Foundation Survey found that some 28 percent say that even accurate stories portraying politicians in negative light are always fake news, and 51 percent said they were sometimes fake news. Among Republicans, 4 in 10 said such accurate stories are “always” fake news.

Enter the pope with this definition of what is fake in fake news:

It has to do with false information based on non-existent or distorted data meant to deceive and manipulate the reader. Spreading fake news can serve to advance specific goals, influence political decisions, and serve economic interests.

The pope nails the inherent evil in fake news by tracing its origin to the deceitful snake in the Garden of Eden. Rather than blame “fake news” on professional journalists, Francis enlists them as “the protectors of news”:

If responsibility is the answer to the spread of fake news, then a weighty responsibility rests on the shoulders of those whose job is to provide information, namely, journalists, the protectors of news. In today’s world, theirs is, in every sense, not just a job; it is a mission. Amid feeding frenzies and the mad rush for a scoop, they must remember that the heart of information is not the speed with which it is reported or its audience impact, but persons. Informing others means forming others; it means being in touch with people’s lives.

As a journalist, I found much of what the pope wrote to be uplifting, his effort to help the public rediscover the value of professional journalism. He calls for “a journalism of peace,” adding,  “By that, I do not mean the saccharine kind of journalism that refuses to acknowledge the existence of serious problems or smacks of sentimentalism. On the contrary, I mean a journalism that is truthful and opposed to falsehoods, rhetorical slogans, and sensational headlines.”

Sometimes the truth hurts, even when told charitably, and it makes people angry
sharetweet

I like his call for a journalism that is “at the service of all, especially those—and they are the majority in our world—who have no voice.” It’s a call for social-justice journalism. And his use of the Prayer of St. Francis (which is actually a prayer written in the twentieth century) to spell out a media ethic will be memorable.

On the other hand, there is a shortcoming, from my point of view, that’s common to Vatican statements on the role of the news media. Francis urges reporters to seek the truth, but also seems to say they should hold back if it is too damaging:

… falsehood can always creep in, even when we state things that are true. An impeccable argument can indeed rest on undeniable facts, but if it is used to hurt another and to discredit that person in the eyes of others, however correct it may appear, it is not truthful. We can recognize the truth of statements from their fruits: whether they provoke quarrels, foment division, encourage resignation; or, on the other hand, they promote informed and mature reflection leading to constructive dialogue and fruitful results.

Sometimes the truth hurts, even when told charitably, and it makes people angry. Any reporter, from the one who covers the town zoning board for a weekly newspaper to the one based in the White House for a television network, would know that. Good reporting holds people in authority accountable.

As for “fruitful results,” no reporter knows how a story will play. Readers and viewers will interpret it as it suits them. Sometimes, the story that seems most compelling will fall quietly like a stone into a deep lake; it feels as if not one person has read it. Other times, a story that seems marginal will capture the public’s interest.

On this, I take Thomas Merton’s advice:

Do not depend on the hope of results. You may have to face the fact that your work will be apparently worthless and achieve no result at all, if not perhaps results opposite to what you expect. As you get used to this idea, you start more and more to concentrate not on the results, but on the value, the rightness, the truth of the work itself.