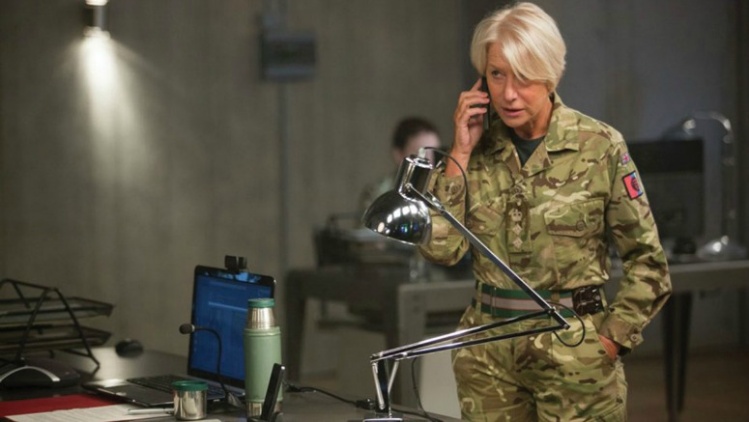 The taut military drama Eye in the Sky stars Helen Mirren as Colonel Katherine Powell, a hardnosed British officer overseeing, from a bunker in the English countryside, a drone anti-terror mission in far-off Kenya. The mission is intelligence gathering; but upon discovering that the Somali Al Shabaab terrorists they’ve been spying on are plotting an imminent suicide bombing, Powell orders a drone missile attack on their hideout, a domicile located in a crowded Somali slum in Nairobi. The actual firing is to be done by a U.S. Air Force pilot (Aaron Paul, from TV’s Breaking Bad), operating the Reaper drone remotely from a base in Nevada. His finger is on the trigger when the drone’s camera reveals a nine-year-old girl arriving to sell bread at the perimeter of the targeted compound, posing the specter of collateral damage; much of the film consists of decision-makers hashing out, with maximum angst, whether to fire. The ethical dilemma hinges on a dreadful utilitarian question: Does the chance to eliminate terrorists who are preparing to attack dozens of innocent victims justify killing one innocent child?

Of course, war has always posed the potential for gruesome harm, and the ethical threshold of civilian targets was crossed a century ago, with the advent of the modern military’s capacity for mass bombardment. In this sense the death of an innocent girl, alas, is nothing new. What is new is drone technology, which complicates the traditional ethical calculus of war—and its emotional and psychological challenges—in three basic ways: the accuracy of the weapon makes these missions more like assassinations than attacks; the warrior is half a world away from the war zone, and thus kills without himself being at risk; and the instantaneous transmission of crystal-clear, up-close images brings home the reality of the attack with absolute clarity, as those who order and execute it watch the kill happen in real time.

In effect, these technological innovations burn away the “fog of war” that has traditionally obscured moral accountability. In the “fog of war” scenario, a theme explored in such war films as Platoon, violence occurs amid mortal combat and far from official scrutiny, leaving the moral and ethical reckoning to be done ex post facto (if at all), and with a strong bias toward justifying the combatant’s actions as a response to grave danger. In the drone era’s new, “daylight of war” scenario, on the other hand, killing takes place in the absence of danger, and is wholly foreseeable; as a result, ethical reckoning is required ex ante facto, right up front. Making the calculus still more difficult in this case is the fact that the enemy is not a nation, but a terror group whose own calculations of success or failure rest largely on propaganda; as the British attorney general puts it at one critical juncture, “If they kill eighty people, we win the propaganda war; if we kill one child, they do.” All in all, the drone’s distorting effect on military, political, ethical, and legal imperatives creates a quagmire; it’s a classic case of technology being out in front of not only our laws and doctrines, but our moral intuitions.

The intuitions and responses laid out in Eye in the Sky are, essentially, three: the indignation expressed by a civilian participant in the deliberations who vehemently argues that killing the girl is wrong on the face of it; the military’s adamant insistence, presented by Powell and her superior general (Alan Rickman), that the mission is necessary, and that legalistic qualms are a self-indulgence; and the weaselly cravenness shown by political appointees desperate to avoid having to make any decision that they might have to take public responsibility for later on.

As drama, Eye in the Sky is wholly engrossing, the narrative briskly shifting between Nairobi, where a Somali agent working for British intelligence tries to get the girl out of the way; the United Kingdom, site of tense deliberations over the attack; and Nevada, where Aaron Paul’s character guides the Reaper and prepares to strike, with mounting dread. Along the way, the film makes some trenchant political observations. One concerns the quality and quantity of intelligence images passed along, not only via the drone itself, but via mini-cams deployed in a mechanical bird and insect (such devices are currently in military development), reminding us just how extensive the observational capacity of the government and military has become. Another concerns the scramble for legal justification by decision-makers, who view legal opinions merely and wholly as a means of political cover, and shop for them accordingly, rifling the legal racks, as it were, for anything that will fit. This Machiavellian attitude is manifest in Mirren’s Colonel Powell, who bullies her information specialist into underestimating the likelihood that the Somali girl will die in the attack, and unleashes steely fury on her legal adviser when he dares to remind her that there are legal limits to such actions.

Other aspects of the film’s portrayal of drone warfare are more doubtful. First is the implication that every single collateral death caused by drone warfare provokes moral agonizing up and down the chain of command; indeed, that participants are so troubled as to be rendered at times incapable, literally, of pulling the trigger. Would a real-life American drone pilot allow his qualms to contravene direct orders? And would his superiors on the national-security team really worry so floridly about one girl? The New York Times reported last year that since 9/11, over five-hundred U.S. drone strikes have killed nearly four thousand people, with well over 10 percent of them unintentionally targeted civilians. In Yemen, meanwhile, some reports suggest that the number of civilians killed as collateral damage has exceeded the tally of intended targets.

You’d never know this from watching Eye in the Sky. And that’s the problem with using a Hollywood movie as a vehicle for investigating ethical and political dilemmas. The conventions of a mainstream feature—the focus on individual characters and fates, the impulse for sympathetic roles and portrayals—conduce easily to propagandistic aims. The atmosphere of moral agony and tragedy that suffuses Eye in the Sky reflects standard-issue Hollywood sentimentality; but in a political sense, it offers Americans reassurance that our drone warfare is morally justified. Ostensibly, Eye in the Sky sets out to present divergent points of view in a neutral fashion; but in the end, there’s little doubt about the bottom line. The movie closes with a terse colloquy between Rickman’s general and one of his political advisers, a woman who has passionately opposed the decision to fire. “What happened today was disgraceful,” she upbraids him. “And all done from the safety of your chair.” Rickman responds, in grave reproach, that he has seen up close and personal the carnage caused by suicide bombers. “Never tell a soldier that he doesn’t know the cost of war,” he intones.

The moral bottom line of Eye in the Sky seems to be that we need these assassinations, even if we know in advance that innocents will die—and then we need to feel badly about it afterward. Meanwhile, in the real world, the tally continues to mount. And what about that other, greater and eternal Eye in the sky?

POSTSCRIPT: a terse lecture about a soldier’s duty is not necessarily the way I would have expected to say goodbye to Alan Rickman, who died in January of pancreatic cancer at sixty-nine. But then again, Rickman could pull off just about anything, and do so convincingly. A veteran of both stage and screen, he was that rare actor who possesses chameleonic versatility while always remaining uniquely himself. With his squinting, ferret-like face and insinuating velvety baritone—his voice, Helen Mirren recalled at his funeral, “could suggest honey or a hidden stiletto blade”—Rickman was tailor-made for villainy, and indeed played his share of heavies: Rasputin; the sherriff of Nottingham; Hans Gruber in Die Hard, Severus Snape in the Harry Potter films, and the corrupt Judge Turpin in Tim Burton’s screen adaptation of Sondheim’s Sweeney Todd. Yet his gift for sympathy shone through, so much so that Rolling Stone critic Peter Travers praised him for “giving us a glimpse into the secret nurturing heart that Snape masks with a sneer.” Some of my favorite Rickman performances were in roles that went against the grain of villainy altogether, especially his tender turn in the badly underrated Truly, Madly, Deeply (1991), where he plays a gifted musician who died before his time. Perhaps the weepiest comedy ever made, it’s also one of the very best films—ever—about grief.

Fans needing one last dose of Rickman, and the honeyed voice that combined brooding intelligence and more than a touch of ennui, will be able to hear him voicing Absolem the Caterpillar in Alice Through the Looking Glass, to be released next month.