Extremists, ‘X-Men,’ and an Ex-Governor 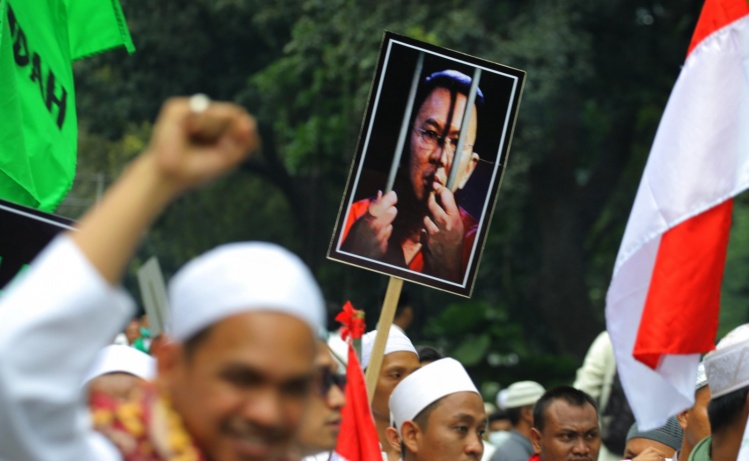 It’s not every year that you encounter an election campaign featuring blasphemy charges, contorted Quran citations, and superheroes from Marvel Comics’ X-Men. But Jakarta’s stormy 2017 competition for governor has been a political season like no other.

The conflict flared last year with a comment from Jakarta’s governor, Basuki Tjahaja Purnama (better known by his nickname “Ahok”). He’s a controversial politician. Respected for his personal integrity and determination to help the poor and combat corruption in government, Ahok is reviled by Indonesian Islamists for his religious affiliation and ethnic identity. He’s a Christian, serving as leader of the capital city in a country that’s over 85 percent Muslim. And he’s a member of Indonesia’s ethnic-Chinese minority population, a community that for generations has been the target of sporadic persecution and pogroms.

Compounding tensions is the fact that Ahok staunchly defends “Pancasila,” the foundational set of principles guiding Indonesia since independence in the aftermath of World War II. Notably, Pancasila includes the concept of religious pluralism and equal legal standing for all Indonesians belonging to any of five officially recognized faiths—Islam, Christianity, Buddhism, Hinduism, and Confucianism. Pancasila offends Islamists who want the nation to become a state ruled by sharia law (in which case Islam would enjoy privileged status as Indonesia’s premier religion). They’ve been vigilant in looking for an opening to cripple Ahok (and thereby weaken Ahok’s ally, President Joko Widodo).

Their opening came in a speech Governor Ahok gave last year to Muslim voters on the island of Java. Ahok referred to a verse from the Quran (5:51) that had been frequently quoted by his political opponents. Here’s what the verse commands the Muslim faithful to do: “O you who believe! Do not take the Jews and Christians as friends and allies. They are friends and allies only of each other. And any of you who becomes their friend thereupon becomes one of them.”

This Quran verse dates from the later Medinan period of the Prophet Muhammad’s career. It expressed his growing frustration with those Jews and Christians who resisted his Islamic message. The hermeneutical issue for exegetes today is whether the hostility in this verse should be extrapolated to apply to all Jews and all Christians for all time.

Many Indonesian Muslims clearly think it should. Throughout Jakarta’s 2016–2017 electoral campaign, Islamist preachers repeatedly told their congregations that this verse forbids Muslims from voting for Christians in any leadership position that might result in non-Muslims ruling over the followers of Allah. Ahok fought back in a spirited riposte. Speaking to a group of Javanese Muslims in September, he argued that Islamic religious figures were deliberately misleading voters in using verse 5:51 as a club with which to beat him. This was all his enemies needed. They fanned a flame of anger: a Christian has the nerve to say he knows better than the Muslims what Islam’s holy book really says.

Typical is the demand posted on social media by an Islamist named Habib Rizieq: “Segera tangkap Ahok karena hina al-Qur’an” (“Have Ahok arrested right away, because he has insulted the Quran!”). Rizieq is notorious as the leader of Front Pembela Islam (“the Islamic Defenders Front,” commonly known by its Indonesian acronym FPI). Taking as its long-term goal the application of sharia throughout the nation, this group arose in 1998, as President Suharto’s dictatorial regime disintegrated and Indonesia’s emergent democracy opened up space for long-suppressed Islamist movements. The FPI’s website announces its purpose: “Pelayan ummat dan pembela agama” (“service to the community of believers and defense of the faith”). The group’s online mission statement proclaims, “Jihad is our path of struggle; a martyr’s death is our hope.”

For the Islamic Defenders Front, jihad entails a campaign to Islamicize Indonesian society. The group first gained national attention for its vigilante attacks on nightclub customers, prostitutes, and bancis (transgender people). It won further notoriety by protesting a concert by Lady Gaga. Indonesian fans had purchased over fifty thousand advance tickets for a performance in Jakarta scheduled in June 2012, but threats of violence by FPI leaders forced her to cancel the show. FPI members thronged the capital’s streets with signs reading, “Allah, protect me from the temptation of Satan Gaga, the accursed!”

The FPI casts a wide net. Its members also engage in violence against adherents of the Ahmadiyah, a sect widely loathed in Muslim countries for its belief that prophecy did not end with the death of Muhammad. Militants belonging to the Islamic Defenders Front frequently target Christian churches (sometimes setting them afire), assault Christian worshippers, and warn of the nation’s imminent “Christianization.” FPI leaders I’ve interviewed in East Java freely acknowledge such assaults but rationalize them as “defense of the ummah [Islamic community].” Such defense is necessitated, they say, by the behavior of Christians and other minorities who engage in open-air prayer services and other public “provocations.”

Habib Rizieq is very much the product of a hardline ideology imported from the Arab Middle East. He attended both King Saud University in Riyadh and the Jakarta-based Institute for the Study of Islam and Arabic. The latter organization was established by Saudi Arabia (in fact Saudi funding provides free tuition for all Indonesian students enrolled at the Institute). For the past several decades the Wahhabi kingdom has paid for the building of hundreds of mosques and pesantren (Islamic boarding schools) throughout Indonesia. The purpose of this largesse: to “purify” the world’s most populous Muslim nation of its longstanding tradition of tolerance and syncretism, and replace this with a homogenized and standardized form of Islam that is subject to guidance by Saudi Arabia. And the Salafist thinking underlying this kind of Islam advocates enmity for Shias, Sufis, Jews, and Christians.

Wahhabi-style intolerance was on display at a mass rally organized by the FPI last December 2. “Let’s defend our religion,” Rizieq urged the crowd of some two hundred thousand Muslims, telling them to “stop all forms of religious blasphemy and put all violators on trial.” (Indonesia’s blasphemy law, which dates to 1965 and the era of President Sukarno, mandates a penalty of up to five years’ imprisonment for public statements expressing disrespect or contempt for religion. Cases that come to court generally involve perceived insults against the religion of Islam.)

But FPI loyalists weren’t the only Muslims to show anger at Ahok for citing the Quran. Among the more unusual protests was one initiated by an Indonesian artist named Ardian Syaf, an illustrator for Marvel Comics’ X-Men. He had the job of drawing an April 2017 issue featuring superhero Kitty Pryde, a member of the X-Men team who happens to be Jewish. As he later confessed freely, Syaf couldn’t resist inserting cryptic references to the Ahok case into the comic book. In one scene, Kitty faces a sullen crowd in a crowded urban setting. On the awning of a storefront is the number 212 (symbolizing December 2, the date of the mass FPI protest). Another storefront in the background advertises “Jewelry,” but Kitty’s hair obscures the latter part of the word so that what stands out for the reader is the word “Jew,” positioned just to the left of Kitty’s head. An additional cartoon panel shows a thickly muscled man swinging a baseball bat. The t-shirt he wears displays the logo QS 5:51 (QS for “Quran Surah,” or scriptural chapter), which of course is the verse calling on believers to distance themselves from Jews and Christians—the verse that got Ahok into so much trouble.

As for Ahok: amidst the mounting public outcry that built over a period of months, he was put on trial, convicted of blasphemy against Islam, and sentenced to two years’ imprisonment. Unsurprisingly, he also lost his election bid for governor. The winner was a Muslim candidate who had openly courted the support of the Islamic Defenders Front.

So: a big win for the FPI, and for Saudi-financed forms of Islamist intolerance. The losers: not only former Governor Ahok, but also all who honor Pancasila, pluralism, and religious coexistence.

‘Pray Only to Allah!’