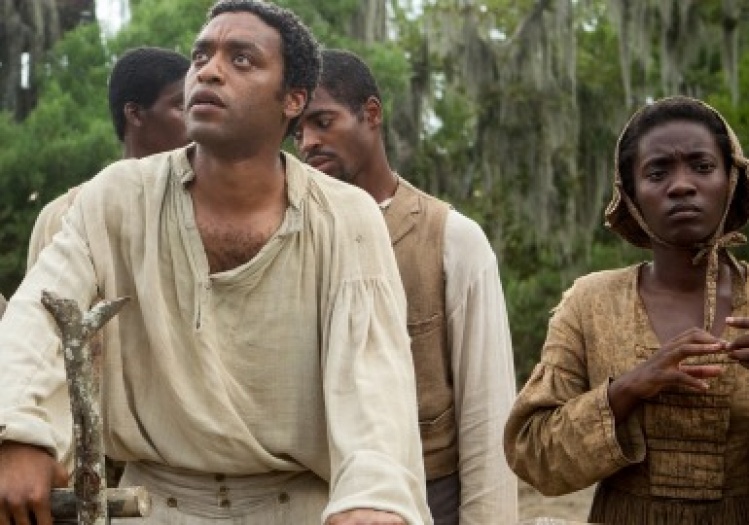 The 1853 book Twelve Years a Slave by Solomon Northup, a black freeman kidnapped and sold into slavery, retails so much cruelty, physical and mental, that any movie adaptation might have become a freak show or, given an archly aesthetic treatment, a exercise in the “theater of cruelty” or, even worse, a feast for the self-righteous, with virtuously suffering victims over here and slavering sadists over there. Writer John Ridley and director Steve McQueen have achieved something immeasurably better.

In this film slavery creates a hell in which everyone burns—blacks and whites, men and women, victims and victimizers, the relatively well-intentioned and the irretrievably malevolent. To suggest that slaveowners suffered as much as slaves would be obscene, but the film powerfully dramatizes the scholar Eric Ashley Hairston’s apt description of the South’s slave-based economy as “a crumbling ruin of the Western world, its rulers fallen creatures largely bereft of virtue.” A crumbling ruin doesn’t discriminate among those it crushes.

Solomon—born free, educated, musically talented, married with children, making a modest but adequate living as a jack-of-all-trades in Saratoga, New York—seems destined to live a sane life in sane surroundings. Then two con men lure him down to Washington, D.C., to play his fiddle at a circus where they supposedly work as magicians. They’re prestidigitators all right, for they manage to turn a free man into a slave on a Louisiana plantation. The delirious nightmare of kidnapping soon gives way to the quotidian nightmare of slavery. But even nightmares vary in their intensity. Under a genteel slaveowner named Ford (Benedict Cumberbatch), Northup receives affectionate respect for his musical and engineering skills (he contrives a waterway for shipping Ford’s goods), but when Solomon’s instinctive pluckiness puts him at odds with an envious overseer, Ford sells him to another planter, Epps, just to get him out of harm’s way. It turns out that Epps is deranged, and Solomon’s situation suddenly goes from bad to much worse.

What keeps 12 Years a Slave from being a sadomasochistic wallow is the way Steve McQueen’s sense of design clarifies the terrible ineluctability at work in this story and in slavery itself. Take the very opening moments. First we see a row of slaves in some field, the look in their eyes signalling bottled-up fear. What are they waiting for? Seconds pass before we get the reverse shot and the inevitable answer: a brisk, no-nonsense overseer demonstrating just how he wants his sugar cane cut. Property put to work on property.

The director uses visual parallels sometimes for irony, sometimes for pathos. An example of the former: There is a flashback to the Northup family in Saratoga,well dressed, greeted pleasantly by white citizens, strolling into a dry-goods store where the proprietor cheerfully waits on them. A visiting southerner’s slave wanders in but is soon yanked out by his master, who apologizes for the intrusion. “No intrusion,” Solomon rather superciliously replies, never dreaming that the slave’s lot in life would have anything to do with his own. But when the captured Northup is put on exhibit in Louisiana, it is not in the open-air slave market that has become such a cliché but in the interior of a store not unlike the one in Saratoga.

As for pathos, early on we get a close shot of Northup’s violin—so close that the instrument’s wood and strings form a near-abstract image. Simultaneously, we hear Northup tuning up for a Saratoga dance where he plays with gusto and receives applause and pay. Much later, we get another close-up of the violin; only this time we hear it being smashed to pieces by its despairing owner.

McQueen and Ridley spare none of the characters. When Eliza, a slave separated from her children, first arrives at the Ford plantation, Mrs. Ford looks at her compassionately and sweetly urges “some food and rest.” Then she adds in equally dulcet tones, “Your children will soon be forgotten.” Mind you, she is supposed to be one of the more humane slaveowners.

McQueen doesn’t spare the audience either. Physically attacked by an overseer for displaying too much intelligence, Northup gives the sniveling little sadist a sound thrashing—just the sort of movie violence that makes audiences cheer. But seconds later we see Northup standing alone, awaiting what he knows must come: severe punishment, perhaps death, for striking a white man. We’ve had our fun cheering on the hero’s rebellion, but now we must watch as he suffers the consequences of this rebellion. Our facile moral satisfaction evaporates.

The cast of this American-British production includes some of the best actors on either side of the Atlantic, and nearly everyone comes through. Star power never interferes with the immediacy of great historical recreation. (One exception: Brad Pitt’s performance as a kindly Canadian is so clumsy that it temporarily breaks the integrity of the film.) If McQueen’s direction and Ridley’s writing make 12 Years a Slave harrowing, it is Chiwetel Ejiofor’s performance as Northup that endows the movie with hope. Much of the time Northup is an onlooker, and even when forced into action he must hide behind a mask of stolid humility. But whenever the camera draws close to his face, we see the mental wheels turning, the besieged patience, the courage undimmed.

Though it’s Ejiofor’s picture, you might find your dreams invaded by Michael Fassbender’s Epps, the most disturbing movie maniac since Robert Mitchum’s rapist in the 1962 Cape Fear—and disturbing in much the same way. In both characters mania isn’t so much outright psychosis as a kind of twisted rationalization. Epps is in love (or lust) with Patsey, his prettiest and hardest-working slave, and this one-sided attraction ignites a nightmare logic that Fassbender’s no-holds-barred performance invites us to follow even as it repels. Isn’t it degrading for me, a white man, to love a black woman? Of course. But isn’t Patsey, by being so attractive, forcing me to love her? Of course. Therefore I must persecute her unmercifully. In a culture corrupted by slavery, obsession combines with self-righteousness to produce cruelty.

Two reservations. First, although most of Ridley’s dialog is sinewy, a few scenes in which slaves talk among themselves—particularly one in which Solomon justifies his strategies to Eliza—sounded stilted to me. For these private conversations, the writer borrowed the tone, and sometimes the actual words, of Northup’s book, which itself is somewhat stilted, but in a touching Victorian manner that possesses its own eloquence. What works on the page, though, doesn’t always work on the lips of actors. Second, the real Northup was rescued by the white northern family that once owned his ancestors and shared with them their surname. The black Northups stayed on very good terms with the white Northups. In the movie, although the rescue itself is superbly staged, some viewers might be puzzled as to who exactly is behind it.

The critical consensus seems to be that 12 Years a Slave is the greatest theatrical movie about American slavery. Of course it is. What’s the competition? More to the point, it is among the greatest films ever made, in any country, on any subject. Don’t miss it.