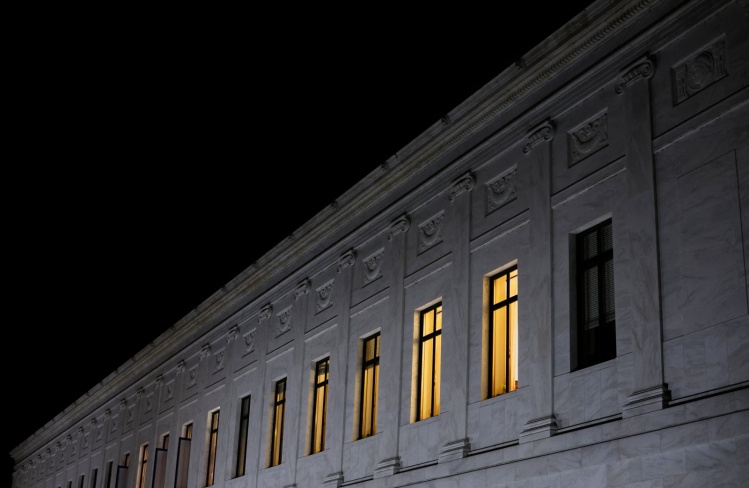 Nearly two months after Justice Samuel Alito’s opinion on Dobbs v. Jackson Women’s Health Organization was first leaked to the public, the Supreme Court has officially issued its decision repealing the constitutional right to abortion. The ruling fell along the predicted lines, with Justices Amy Coney Barrett, Neil Gorsuch, Brett Kavanaugh, John Roberts, and Clarence Thomas concurring with Alito; Justices Stephen Breyer, Elena Kagan, and Sonia Sotomayor dissented. The reasoning of the court’s majority will be scrutinized and critiqued for years to come, while the ruling’s implications for other court decisions grounded in the right to privacy are yet to be determined. But today, in considering both the immediate and potential consequences of the repeal of Roe nearly fifty years after it was decided, it is clear that the new ruling does not provide a final resolution to this country’s fraught debate about abortion, and it would be a mistake for those who believe in the value of all human life to assume or pretend that it does.

“Trigger laws” in thirteen states will go into effect now that the decision has been handed down, and more states are expected to follow suit. Some ban abortion in almost all cases, including rape and incest. Many force women to carry nonviable pregnancies to term. Some make performing or helping someone receive an abortion a crime, even if it happens in another state where abortion is legal. Other states are preparing similar laws, and it is likely that roughly half of the U.S. population will soon live under restrictions that would have been impossible before the new Supreme Court ruling. It is a grim irony that many of these states already rank among the bottom in terms of access to maternal care and possess some of the highest maternal mortality rates. Their severely underfunded social safety-net programs also make them some of the worst places to raise children. Of course, the effects of these laws will not be evenly felt. Women with enough money will still be able to get many abortions or bear the costs of raising an unexpected child. Poor women, especially women of color, won’t. Meanwhile, a number of other states are codifying legal access to abortion, in many cases with minimal restrictions. Some states and cities are also declaring themselves “sanctuaries” for women seeking abortions, drafting laws to protect those who come from states where abortion is now illegal. The Biden administration is pondering executive actions designed to limit the impact of the court’s ruling. If American opinion has long been split on abortion, now American law will be too—between states where it’s banned or heavily restricted and states where it’s broadly permitted.

In a pluralistic democracy like ours, the convictions of a minority cannot be made into law over the will of the majority.
sharetweet

It is not a contradiction to seek to protect unborn children and also to be concerned about these and other possible consequences of overturning Roe. People who believe in the sanctity of all life, including the unborn, can recognize that abortion law is a particularly complicated matter because of the competing goods it must balance: the life of a child, the health and self-determination of the mother. The state has an interest in protecting both. Restricting access to abortion is morally irresponsible if it’s separated from fulfilling obligations to support women who are pregnant or might become pregnant. We should acknowledge the risks to physical and mental health that attend pregnancy, the financial and social stressors that accompany it, and the effects it can have on women’s agency—and we should reject glib assertions that adoption, private charity, and access to crisis pregnancy centers are enough to address the challenges new abortion restrictions will create. We should advocate for policies reflecting the conviction that child-rearing and family care are not burdens to be borne by self-sufficient individuals but things for which the whole community shares responsibility. Bearing this responsibility in twenty-first-century America requires state and federal programs that meet the material needs of pregnant women, mothers, and their children. These include comprehensive, accessible, and affordable healthcare; paid parental leave; a child tax credit; a living wage; robust social safety-net programs; and affordable childcare options. It is telling that none of the trigger laws going into effect does anything to address the realities of carrying or raising a child. A society that requires women to bring pregnancies to term without addressing the burdens that can accompany motherhood demonstrates that it is possible—and all too common—to be anti-abortion without really being pro-life.

The U.S. bishops might try to keep this in mind. Speaking at Loyola University Chicago in 1985, Cardinal Joseph R. Bernardin reminded listeners that Catholicism sees human life as both sacred and social, and so “we must develop the kind of social environment that protects and fosters its development.” But in their insistence on treating abortion as the “pre-eminent” political priority—which Cardinal-designate Robert McElroy of San Diego has correctly called a distortion of Catholic teaching—many bishops seem to have lost sight of this need. In their headlong pursuit to outlaw abortion by any means necessary, they tied the institutional Church to a political party hostile to the very policies that would help women and families raise children—a party now willing to abandon democracy in order to attain and keep power. Church leaders who use the Eucharist as a tool to enforce their single-issue politics alienate many ordinary Catholics, who understand intuitively that the legal and political dimensions of abortion are more complex and less certain than the moral issue. Recent polling shows that 63 percent of U.S. Catholics believe abortion should be legal in all or most cases—putting them in line with the overall U.S. population—and 68 percent believe that Roe should have been left to stand. Of course, the Church is not a democracy, and its moral teachings are not determined by opinion polls. But until the bishops succeed in persuading most of the laity, they should stop trying to strong-arm Catholic politicians by means of threats.

In 1973, weeks after Roe was decided, the editors of Commonweal wrote, “Now the Church must think through the implications of its defeat,” warning that if the public “continues to view abortion in isolation from other social and moral problems, the anti-abortion cause will become the tool of the right wing.” That, unfortunately, is exactly what happened. Now that Roe is finally overturned, the Church must think through the implications of its success. An issue that has dominated public discourse and reshaped American society over half a century remains far from settled—morally, politically, legally, culturally. Catholics ambivalent about abortion and discouraged by the Church’s alliance with the right will continue to tune out the bishops or even disaffiliate. Meanwhile, the Left’s often cavalier dismissal of the moral status of the unborn makes productive debate on this issue increasingly difficult. With lawmaking on abortion returned to the state level, partisan divides and regional differences will deepen. Women will continue to seek out abortions, through legal and extralegal means, including medications delivered by mail. Abortion is likely to remain the subject of protests, sloganeering, and demagoguery. As we have seen across the decades—from the murders of abortion doctors and the bombing of clinics to recent attacks on pregancy-counselling centers and a deaththreat against Justice Brett Kavanaugh—some people on both sides of this issue are willing to resort to violence. Such violence is likely to increase in this moment of uncertainty.

In a pluralistic democracy like ours, the convictions of a minority cannot be made into law over the will of the majority. This means that, for those opposed to abortion, there is no way around the hard work of persuasion and the necessity for compromise. But the Trumpified GOP with which most of the pro-life movement has aligned itself in recent years has no time for persuasion or compromise, and no interest in attending to the uneasy ambivalence many people feel about this issue. It’s worth remembering that most Americans are both reluctant to ban abortion outright and willing to consider new restrictions that Roe made difficult or impossible. They are aware of the conditions unique to the one half of the human species that experiences pregnancy, and supportive of measures that would make it easier for women to bear and raise children. It is hard to imagine the kind of compromise that might be acceptable to both sides of this ongoing debate, but what other option is there now that the court has returned this issue to our elected representatives? It will not be easy. It will require flexibility, imagination, and, yes, wisdom on the part of lawmakers at all levels of government. It will require a willingness to learn from the experience of other countries that have already had to deal with this issue legislatively. Finally, it will require that public intellectuals, the private sector, religious leaders, and ordinary Americans learn to treat abortion as a question of public policy rather than just a tribal marker in a culture war. Whether we are up to these difficult tasks remains an open question, but we can no longer dodge or defer them. With this Supreme Court ruling, one vexed era has ended, and another is about to begin.