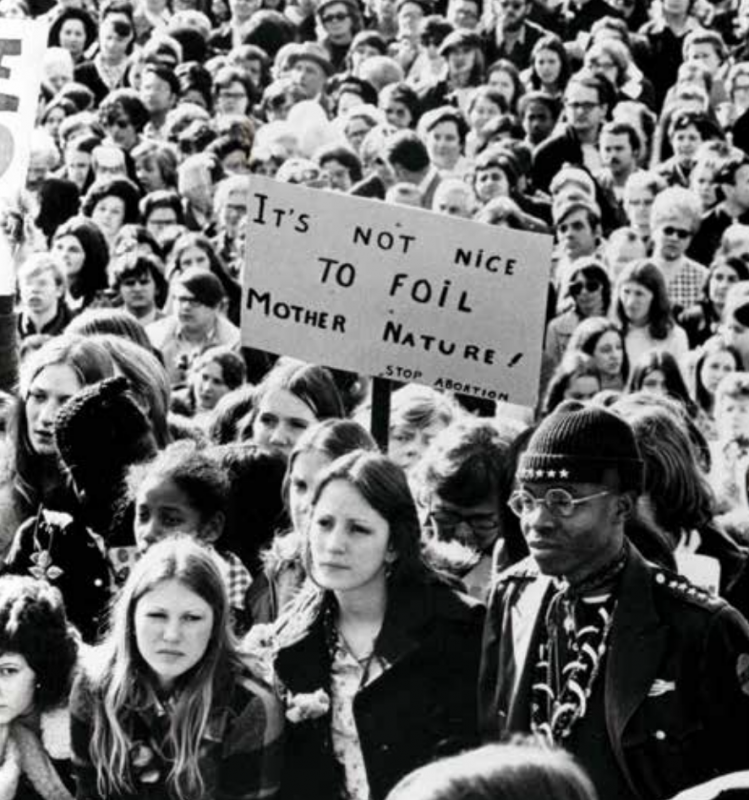 This editorial was published in the February 16, 1973 issue of Commonweal, which was merely weeks after the Supreme Court’s decision in Roe v. Wade.

The decision of the United States Supreme Court in favor of abortion is a fair measure of the growing secularization of American society and of the political impotence of the American Catholic Church.

We grant that law only imperfectly reflects a society’s values. We know that in a pluralistic society minorities must sometimes live with laws that violate their beliefs. We acknowledge that in some states too restrictive abortion laws needed reform; and we concede that good men have argued well that abortion should be allowed as a lesser evil in special cases—when the mother’s life is endangered, rape, incest, or a severely damaged fetus.

Yet, what a society values it protects with laws. In that sense, civil rights, minimum wage and welfare bills have a moral dimension in that they witness to the national community’s concern for every member; and state laws restricting abortion at least testified to some consensus that life in process is life and must be protected.

Now, says the Court, that consensus is gone. In limiting the term “person” to those already born, in making abortion a purely “private” decision, in applying that slippery term “meaningful” to a child’s life, and in trying to wash its hands of the question of when life begins by claiming that theologians, philosophers, and scientists had failed to answer it, the Court has, in effect, determined when life may begin. It has diminished the whole concept of what it means to be a person and succumbed to that cultural elitism that marks cultures content with their values while slipping into decline.

If the public continues to view abortion in isolation from other social and moral problems, the anti-abortion cause will become the political tool of the right wing, of those who would resolve complex political problems with instant constitutional amendments and theological debates.
sharetweet

The Court dramatizes what has been clear under other signs for some time: we stand in danger of becoming an abortion culture—one which cringes from the thought of death yet sanctions real death and living death for the convenience of the ruling class. An abortion culture is built on individualism, the fights of the strongest individuals to thrive; it sees “privacy” not primarily as a protection of the person but as a system of isolation—withdrawal from the full implications and responsibilities of sex and love. It is a comfortable way of life that settles for the least inconvenient solution to moral dilemmas like bombing.

Now the Church must think through the implications of its defeat. If the abortion debate continues on the present—women’s exclusive right-to-decide vs. “It’s murder”—level, and if the public continues to view abortion in isolation from other social and moral problems, the anti-abortion cause will become the political tool of the right wing, of those who would resolve complex political problems with instant constitutional amendments and theological debates by excommunicating their opponents, of those who have consistently backed a murderous war, opposed gun control, and fought labor, health and welfare legislation designed to enhance the dignity of society’s weakest members.

The “official” Church response to the decision has been an embarrassment—episcopal fulminations and full-page dead-fetus pictures in the diocesan press, plus a reminder from Cardinal Terence Cooke that “judicial decisions are not necessarily sound moral decisions.” But now the judges and legislators know that the bishops, with a few exceptions, are no longer strong moral or political leaders. They lost their credibility on sexual morality by their dogmatic opposition to birth control; and few take them seriously as guardians of human life when they can preach homilies at the White House and not speak for the innocent children of Vietnam killed by our bombs and shells.

What should the Church do now? Radically reeducate itself on both the value of every human life and its own need to take a less compliant and more prophetic stance against the trend toward egoism and selfishness in our government, culture and Church. Support responsible birth control so people will learn to decide about a child before it is conceived. Take women seriously and give them real status in the community of the Church so that childbearing is not seen just as a woman’s joy-burden but as a community responsibility. Make it socially acceptable and financially possible to have a child outside of marriage. Really be pro-life: champion all those whose lives are still in process, whose future is still precarious, whose true potentials are still struggling to be born.