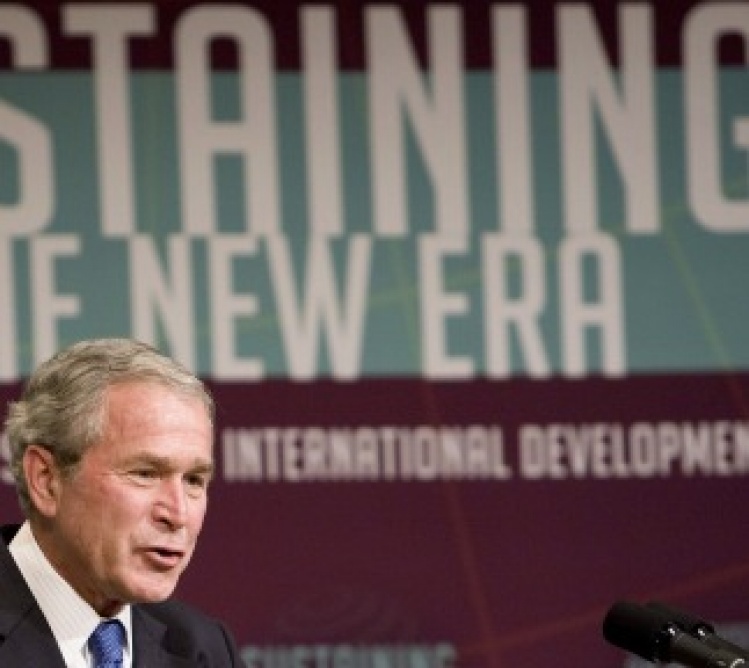 The policy mystery of our time is why politicians in the United States and across much of the democratic world are so obsessed with deficits when their primary mission ought to be bringing down high and debilitating rates of unemployment.

And since last week saw a cross-party celebration of the opening of George W. Bush's presidential library, I'd add a second mystery: Why is it that conservative Republicans who freely cut taxes while backing two wars in the Bush years started preaching fire on deficits only after a Democrat entered the White House?

Here is a clue that helps unravel this whodunit: Many of the same conservatives who now say we have to cut Social Security to deal with the deficit supported Bush's plan to privatize Social Security -- even though the transition would have added another $1 trillion to the deficit. The one thing the two positions have in common is that Bush's proposal would also have reduced guaranteed Social Security benefits.

In other words, deficits don't really matter to many of the ideological conservatives shouting so loud about them now. Their central goal is to hack away at government.

This goes to the larger argument about jobs and deficits. For a brief time after the Great Recession hit, governments around the world, including President Obama's administration, agreed that the immediate priority was restoring growth. Through deficit spending and other measures, the 20 leading economies agreed to pump about $5 trillion into the global economy.

Obama and Democrats in Congress enacted a substantial stimulus. The package should have been bigger, but Obama -- thinking he would have another shot later at boosting the economy -- kept its size down to win enough votes to get it through Congress.

The second chance didn't come because conservatives stoked anti-government deficit mania -- and never mind that the deficit ballooned because of the downturn itself, the stimulus needed to reverse it, and those fiscally improvident Bush-era decisions.

Then along came academic economists to bless the anti-deficit fever with the authority of spreadsheets. In a 2010 paper cited over and over by pro-austerity politicians, Carmen Reinhart and Kenneth Rogoff argued that when countries reached a debt level above 90 percent of their GDP, they almost always fell into slow growth or contraction.

Financial Times columnist Philip Stephens compactly takes the story from there: "The implication was that deep retrenchment was the only route back to prosperity. Now, economists at the University of Massachusetts Amherst say the results reflected a data 'coding error' and some questionable aggregation. The assumption that high debt always equals low growth is not sustained by the evidence."

While Reinhart and Rogoff acknowledged their error, they dismissed the controversy in a New York Times op-ed as an "academic kerfuffle" and insisted that their findings had often been "exaggerated or misrepresented" by, among others, politicians. (They also complained about the "hate-filled, even threatening, email messages" they received. I'd be happy to share my email with them. Friends, if you have the good fortune to be engaged in public debates, you get a lot of angry missives these days.)

The two economists would have added to their credibility by showing a bit more humility about their data problem. But the damage was done. Europe and the United States moved prematurely to austerity. Tens of millions of people have suffered from joblessness or lower real incomes. Reinhart and Rogoff didn't force these decisions, but they abetted them.

Now, through the sequester cuts, we are compounding the problem. It's outrageous that Congress and the administration are moving quickly to reduce the inconvenience to travelers -- people fortunate enough to be able to buy plane tickets -- by easing cuts in air traffic control while leaving the rest of the sequester in place. What about the harm being done to the economy as a whole? What about the sequester's injuries to those who face lower unemployment benefits, who need Meals on Wheels, or who attend Head Start programs?

Instead, we should be using this period of low interest rates to invest in our infrastructure. This would help relieve current unemployment while laying a foundation for long-term growth. But anti-government slogans trump smart-government policies. For reasons rooted in both ideology and the system's bias against the less privileged, we hear nothing but "deficits, deficits, deficits" and "cuts, cuts, cuts."

To paraphrase a French statesman from long ago, this is worse than a crime. This is a mistake. Its costs are being borne by good people who ask only for the chance to do productive work.