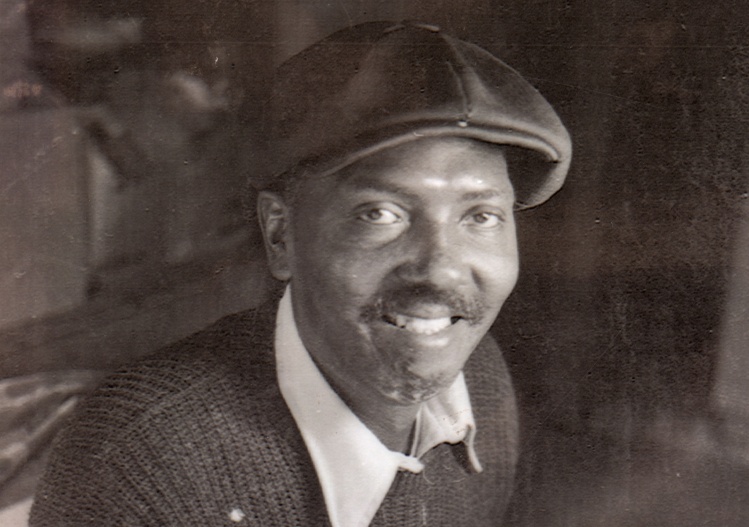 A poem that’s reducible to a message is not a good poem. A poem you can paraphrase in prose is not a good poem. I feel absurd repeating such banalities, but much have I traveled in the Realms of Dull, wherein preachers and teachers and other professional talkers treat poems like wisdom machines or shortcuts to a conclusion. It’s like holding up a river stone far from the river. Dry and dull, the stone gives no hint of the gleam that made one marvel in the first place.

So. Though I do love what this poem by Etheridge Knight is saying, and though it gives a jolt of hope to a part of my heart that sometimes seems hardened with despair, what I would first of all draw attention to is the strange, syncopated, joyful, and utterly inimitable music of its meaning. Ultimately the music is its meaning.

A Wasp Woman Visits a Black Junkie In Prison

After explanations and regulations, he
Walked warily in.
Black hair covered his chin, subscribing to
Villainous ideal.
“This can not be real,” he thought, “this is a
Classical mistake;
This is a cake baked with embarrassing icing;
Somebody’s got
Likely as not, a big fat tongue in cheek!
What have I to do
With a prim and proper-blooded lady?”
Christ in deed has risen
When a Junkie in prison visits with a Wasp woman.

“Hold your stupid face, man,
Learn a little grace, man; drop a notch the sacred shield.
She might have good reason,
Like: ‘I was in prison and ye visited me not,’ or—some such.
So sweep clear
Anachronistic fear, fight the fog,
And use no hot words.”

After the seating
And the greeting, they fished for a denominator,
Common or uncommon;
And could only summon up the fact that both were human.
“Be at ease, man!
Try to please, man!—the lady is as lost as you:
‘You got children, Ma’am?’” he said aloud.

The thrust broke the dam, and their lines wiggled in the water.
She offered no pills
To cure his many ills, no compact sermons, but small
And funny talk:
“My baby began to walk...simply cannot keep his room clean...”
Her chatter sparked no resurrection and truly
No shackles were shaken
But after she had taken her leave, he walked softly,
And for hours used no hot words.

Identity can be liberating and it can be oppressive. It can be liberating to discover and claim who you truly are. It can be oppressive to feel yourself trapped in identities that other people define. This is true for everyone, from secularists to Christians, from ex-cons to cancer patients. This is one of Knight’s reasons for foregrounding identity in the title. Nobody wants to be called a Wasp. Nobody wants to be called a Black Junkie. But these designations are not equal. This poem is incredibly generous in spirit—and it is in spirit: Knight imagined this event, which I actually find more moving than if it were “real.” It seems harder to sit in a lonely cell dreaming such communion without an actual event to draw on. Behind this poem, though, lies a little prose poem that Knight also wrote about prison, where he spent eight years of his life for armed robbery.

Identity can be liberating and it can be oppressive.
sharetweet

Rehabilitation & Treatment in the Prisons of America

Here Knight goes to embrace his last identity—which is the only one he was born with, the only one he could never change—and it destroys him. It’s a trap set by others. A machinery of language and labels. A symptom of systemic rot, wherein even a Black man who has paid his dues (and armed robbery would seem to warrant some serious dues) and is actively seeking treatment and rehabilitation (Knight did eventually kick his heroin habit) is dropped back into the same absurd, humiliating, and often fatal half-status that drove him to despair in the first place.

Jesus promises both the fulfillment and annihilation of identity. “You are in me deeper than I am in me,” says Augustine. “Therefore if any man be in Christ he is a new creature,” says Paul. And in Revelation this whole world is both consumed and consummated by and with God’s transfiguring love.

What I love about this Knight poem is just how modest its miracle is.
sharetweet

Meanwhile, as three officers look on and casually talk, another one slowly strangles a Black man named George Floyd in an American street. Meanwhile, because a metaphorical virus has infected a political party, a real one has killed more than half a million Americans. Meanwhile, for much of last year the whole sky has been on fire in the American West.

What I love about this Knight poem is just how modest its miracle is. No shackles are broken, no hearts are ripped open, no one has some transformative rapture. No, all that happens is one very troubled man in one very dark place has an afternoon without saying “hot words.” His chronic anger is eased out of a human connection, out of his own ability to reach out. Note that it’s his question that gets their discussion going, his curiosity or desperate politeness that frees them, for a moment, from being only a Wasp and a Junkie.

Note, too, the texture of this truth. “After the greeting, they fished for a denominator, / Common or uncommon; / And could only summon up the fact that both were human.” “Denominator” suggests statistics and fractions; “summon” is shadowed by judgment and law; and all of these “common” sounds seem writhing toward the one word that, for both of these people, means freedom. This poem is so playful, musical, and buoyant that you can almost—but only almost—forget the abyss of bad circumstance, intractable misunderstandings, and hellish history that lie behind it. That’s no miracle. It’s something much more durable, available, human.