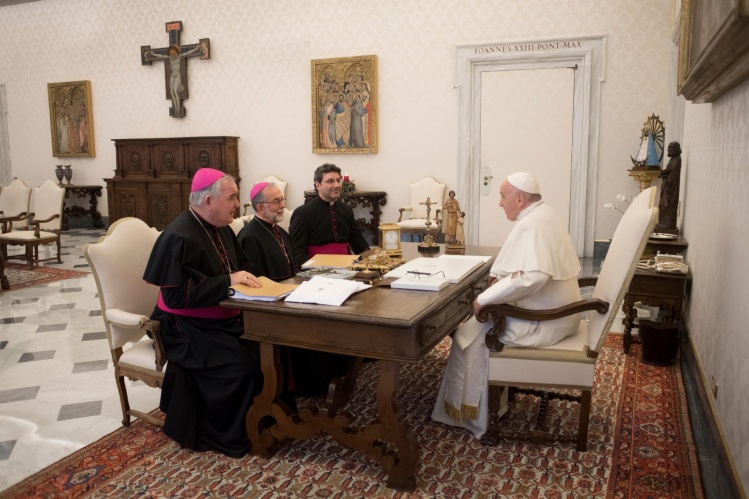 The 2015 report of the Truth and Reconciliation Commission of Canada, which was established with the express purpose of redressing “the legacy of residential schools,” included ninety-four recommendations and calls to action. One of those, No. 58, reads as follows:

We call upon the Pope to issue an apology to Survivors, their families, and communities for the Roman Catholic Church’s role in the spiritual, cultural, emotional, physical, and sexual abuse of First Nations, Inuit, and Métis children in Catholic-run residential schools. We call for that apology to be similar to the 2010 apology issued to Irish victims of abuse and occur within one year of the issuing of this Report and to be delivered by the Pope in Canada.

In a 2017 visit to the Vatican, Prime Minister Justin Trudeau cited this recommendation in requesting that Francis come to Canada to deliver such an apology. A year later, the pope wrote and declined. Trudeau expressed sadness over the pope’s decision and declared, not for the last time, his personal dismay as a Catholic that the request was not to be honored. Relations between the Canadian government and the Catholic Church have been cool since then. But they have grown appreciably worse after the discoveries of unmarked graves on the sites of former Indian residential schools in Kamloops, British Columbia, and Cowessess, Saskatchewan, in May and June. And there has plainly been an increase in anger across the nation: several Catholic churches have been torched, statues have been toppled, cathedral steps and doors have been splattered with red paint and otherwise defaced. Within the Catholic community, petitions calling for ecclesiastical accountability have circulated widely.

No manner of spin can make the Catholic Church in Canada look good right now. But the Catholic Church in Canada has only itself to blame. Prime Minister Stephen Harper apologized to the aboriginal peoples of Canada for the residential schools in the House of Commons on June 11, 2008. Prior to this, the federal government negotiated the Indian Residential Schools Settlement Agreement—the largest class action settlement in Canadian history. Other Christian churches have apologized and made financial restitution in accordance with terms of the Indian Residential Schools Settlement Agreement. But the Catholic Church remains resistant to implementing recommendation No. 58 and reluctant to meet a number of financial commitments it agreed to as a key signatory to the Indian Residential Schools Settlement Agreement. The overwhelming majority of Catholic laity are sickened by the weak response of the Canadian Conference of Catholic Bishops (CCCB), and there are signs that church membership is suffering as a consequence. The episcopate itself appears paralyzed by the escalating rage over its obduracy.

After the discoveries of the unmarked graves, the calls for the pope to come to Canada have increased, amplified by the prime minister and even by some parish clergy. But the puzzling intransigence of the CCCB continues to provoke Catholics and non-Catholics both. Given that the religious orders that ran the residential schools have apologized, and frequently, and that the two principal orders, the Oblates of Mary Immaculate and the Grey Nuns, have vowed to provide full access to the private records and accounts kept during the time of their oversight, the defiant stance of the CCCB compromises the moral leadership of the full Catholic community.

A leader of an affected religious order told me that the Catholic entities feel betrayed by the national conference.
sharetweet

In fact, other popes have met with Indigenous leaders of Canada, either in Canada (in the case of John Paul II) or at the Vatican (in the case of Benedict XVI). And there have been many instances in the past of palpable goodwill between the Holy See and the Aboriginal Peoples of Canada. But now the CCCB has chosen to battle rather than cooperate with Trudeau over his attempts to act on recommendation No. 58, and the fact is that Trudeau (adept at shifting with envious facility between being the Catholic homo religious and the Catholic homo politicus) has read the national temper far better than the conference.

A leader of an affected religious order told me that the Catholic entities feel betrayed by the national conference—that they have been told that the issue is theirs to handle as they, and not the Catholic Church per se, actually ran the schools. Even as individual bishops with residential schools in their metropolitan province have been supportive, other bishops have kept their distance. The majority of Canadian dioceses have no residential schools in their respective jurisdiction and so they don’t see how they are implicated in a moral crisis of national scope.

Indeed, hypercaution, defensiveness, and legerdemain seem to characterize the Church’s response. While it met its financial obligations to provide $29 million in cash for the Aboriginal Healing Foundation and $25 million for services in kind to various aboriginal communities, it raised just short of $4 million of the promised $25 million for healing and reconciliation—and because of a legal loophole was able to secure a release from the government for the remaining sum. It did so by claiming that the Church is constituted as the Church in Canada and not the Church of Canada, that it is not a national Church in canon or civil law—as are her sister denominations—and that negotiations over apologies, reparations, and compensation must be worked out with the fifty Catholic entities that comprise the various dioceses and religious orders directly affected.

There was a time, in the 1970s and ’80s, when the CCCB was a serious national player on social justice issues like labor equality and the role of women in the Church, when prophetic bishops like Cardinal George Flahiff of Winnipeg, Remi De Roo of Victoria, James Hayes of Halifax, and Adolphe Proulx of Gatineau played prominent public roles. But with John Paul II and Benedict XVI prioritizing managerial competence, unquestioned orthodoxy, and supine compliance to Roman imperatives in their episcopal appointments, those days are gone. Where once there was a boldness, even temerity, among leadership, now there is the example of Ottawa Archbishop Marcel Damphousse claiming to know very little about the residential schools’ legacy but promising to start learning—this in spite of being from Manitoba, where many such schools existed. There is Toronto Cardinal Thomas Collins, who tried to downplay the need for a papal apology by suggesting that small, meaningful changes would be better than grand gestures. When Trudeau urged lay Catholics to apply pressure on the clergy to effect a papal apology, Collins called his statement unwelcome and uninformed; the public reaction to Collins’s admonishment was widely disapproving. Likewise, the attempts by CCCB President Richard Gagnon, archbishop of Winnipeg, to deflect the call for a papal apology and papal visit have been unpersuasive, while his ill-conceived outburst that the Catholic Church in Canada is being persecuted was mindlessly insensitive.

Many other dioceses are also pledging transparency, and in doing so providing a “tangible action” engaged in the unearthing of the truth.
sharetweet

Certain individual bishops, however, have reacted differently. Regina Archbishop Don Bolen, whose archdiocese includes the Cowessess residential school, publicly and swiftly acknowledged that the discovery “brings us face to face with the brutal legacy of the Indian Residential School System.... I know that apologies seem a very small step as the weight of past suffering comes intro greater light, but I extend that apology, and pledge to do what we can to turn that apology into meaningful concrete actions.” He singled out as particularly reprehensible the decision of a priest in the 1960s to destroy headstones, wiping out the preserved memories of the dead. Bolen is seeking a papal apology. Vancouver Archbishop J. Michael Miller, former president of St. Thomas University in Houston, has also been forthright in acknowledging past atrocities, saying in his Expression of Commitment that the Church was “unquestionably wrong in implementing a government colonialist policy which resulted in devastation for children, families and communities.... If words of apology for such unspeakable deeds are to bring life and healing, they must be accompanied by tangible actions that foster the full disclosure of the truth. Truth comes before reconciliation.”

But it is not only Regina and Vancouver that are making all records available to investigators, Indigenous leaders, curators, and legal representatives. Many other dioceses are also pledging transparency, and in doing so providing a “tangible action” engaged in the unearthing of the truth.

Meanwhile, the two leading Canadians in the Vatican—Marc Ouellet, Prefect of the Congregation of Bishops, and Michael Czerny, SJ, a close advisor to Francis on numerous social-justice issues—have not publicly contradicted the CCCB, but they are taking a more irenic stance than their national brethren. The Canadian ambassador to the Holy See, Dennis Savoie, a former Deputy Supreme Knight for the Knights of Columbus who has been nuncio since 2013, would seem in position to negotiate the troubled diplomatic waters, but there is little evidence of that. In fairness, diplomats work behind the scenes, but this is an extraordinary situation; I am not familiar with any previous comparable strain between Canada and the Holy See, so it is not unreasonable to expect leadership from Savoie.

But if a papal visit and an apology do not seem likely, the pope and the CCCB have come to some kind of arrangement: in December, a delegation to the Holy See of Elders/Knowledge Keepers, residential school survivors, and youth from across the country, as well as a small group of bishops and Indigenous leaders, will visit Rome for “personal encounters” with Francis, who has agreed “to foster meaningful encounters of dialogue and healing.” (This is something that Francis does well.) In their statement, the CCCB affirms that the pope is “deeply committed to hearing directly from Indigenous Peoples...in the hopes of responding to the suffering and ongoing effects of intergenerational trauma.”

Nevertheless, corrective action for the CCCB requires the implementation of recommendation No. 58, no matter what it demands. As Elder Sam Achneepineskum, a member of Marten Falls First Nation, said to journalist Tanya Talaga: “They hire lawyers and then more lawyers to convince themselves they didn’t do wrong. Yet it is easy to take the good road. It is Jesus’s teachings—not about image and creating false senses of self. How can anyone who calls himself a Christian not see that?”