Douthat on the Synod

By Peter Steinfels
Synod on the Family
Pope Francis
Sexuality 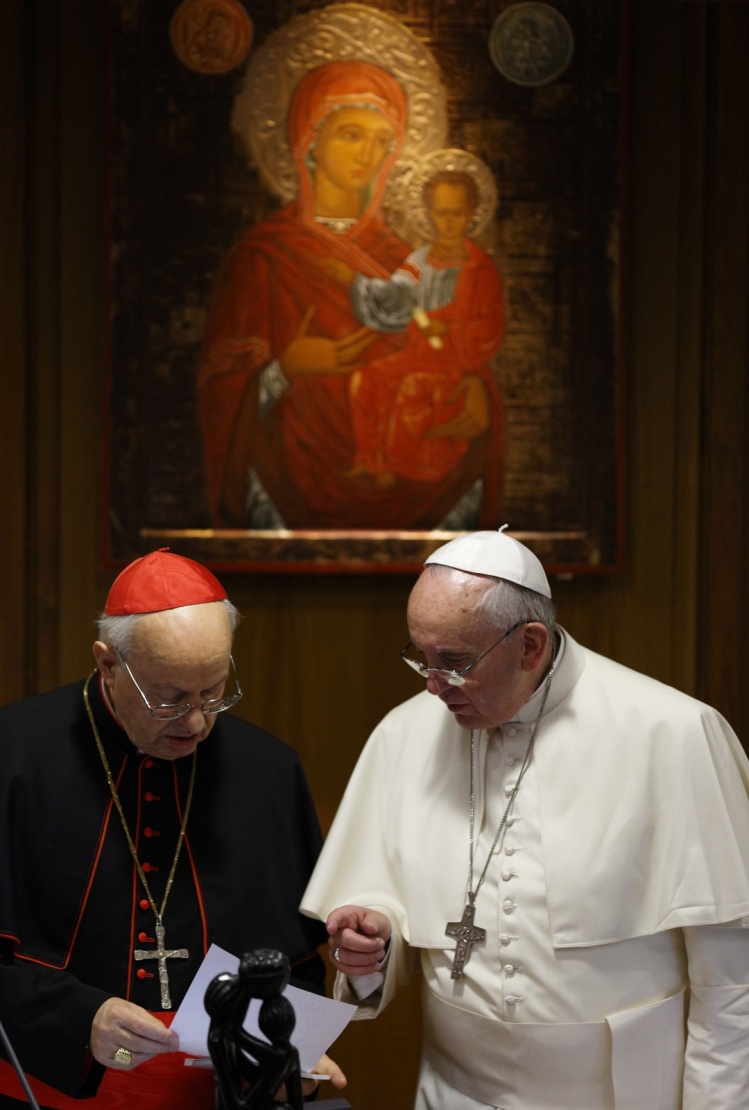 Despite my criticism of Ross Douthat’s history of recent American religion, I look forward to his columns in the Sunday New York Times. Even when seriously wrong, they are almost always usefully (and enjoyably) contrarian to the paper’s dominant worldview.  Compared to the portrait of the Synod appearing elsewhere in the Times, for example, Douthat’s analysis last Sunday was certainly contrarian.  And no less certainly also seriously wrong.

1. Pope Francis has “repeatedly signaled a desire to rethink issues where Catholic teaching is in clear tension with Western social life—sex and marriage, divorce and homosexuality.”

2. Departing from the consensus-seeking efforts of Vatican II, the pope used handpicked men to advance “a document that suggested both a general shift in the church’s attitude toward non-marital relationships and a specific change, admitting the divorced-and-remarried to communion, that conflicts sharply with the church’s historic teaching on marriage indissolubility.”

3. Although both conservatives and liberals have been playing down the “starkness” of this reality, “the synod has to be interpreted as a rebuke of the implied papal position.”  “In the end, the document’s controversial passages were substantially walked back” since “many” participants believed the papally approved steps were unthinkable in view of “what the church has always taught.”

4. This conservative riposte “has the better of the argument.”  Although the church could moderate an unduly severe attitude toward homosexuals, any “celebration” of “non-marital relationships generally, as the synod document seemed to do,” was unsustainable; and to allow communion for the remarried is “not debatable at all.”  After all, the church was willing to lose all of English-speaking Christendom over the principle that “a second marriage is adulterous” and, in light of Jesus’s own words, to alter that teaching “would not be development” but “contradiction and reversal.”

5. Progressive Catholics and the secular press might hail such a change.  But it would put bishops and theologians in an untenable position; sow confusion, doubt, defections, and nutty apocalypticism among “orthodox adherents”; and even risk “a real schism.”

6.  These “orthodox adherents” may be a minority, “even a small minority,” among Catholics in the West; but they are the people who have done the most to keep the church vital”; and “they do not deserve a theological betrayal.”

7. So the pope should “step back from the brink” and find “ways he can shape the church without calling doctrine into question” and explore avenues to bring people back to the sacraments “without a crisis.”

8.  However, if Francis seems to be stacking the deck for “sweeping change,” conservative Catholics will have to be “clear-eyed” and consider the possibility that “the pope may be preserved from error only if the church itself resists him.”

Here is my response:

I have no problem with Douthat’s concern for the dismay of his “orthodox adherents”—more about them later.  But first consider the overall framework of his analysis.  It is built around Pope Francis’s exercise of papal authority, on the one hand, and, on the other hand, church teaching that is “not debatable” regardless of “clear tension with Western social life.”  There is no hint that calls for “rethinking” may have come from many other sources than the pope, including bishops, theologians, and faithful in the pews.  There is no hint that behind these appeals were felt tensions not just with Western culture but with the Gospel and the church’s obligation to witness to Jesus’ call to love and mercy.

So from the start, the analysis reflects the conservatives’ favorite trope: doctrinal fidelity versus social accommodation.  Pope Francis and his appointees have now joined the ranks of accommodators.

(Incidentally, “sex and marriage, divorce and homosexuality” are hardly the major areas where Pope Francis has emphasized tensions between church teaching and Western norms; and he has generally upset conservatives by his lack of accommodation.)

Douthat’s contrast between the consensus-building dynamic of Vatican II and the “fault lines” laid bare in the Synod understates the conflicts of Vatican II.  More importantly, the contrast overlooks the difference between a gathering of two weeks and one of several months each year for four years.  Whether consensus can be achieved on the Synod’s agenda will be seen when it resumes the discussion next year.

Meanwhile, was the fact that the mid-Synod report was “walked back” a blunt “rebuke” to Francis’s “implied” position?  Or was it a reasonable part of consensus building?

Douthat adroitly avoids specifics about how much the final document, still not available in an official English translation, “watered down” the earlier one.  He refers to “large numbers” and “many” negative votes but again avoids the actual numbers.  They show two-thirds support for all but the paragraphs on same-sex relationships and communion for the divorced-and-remarried—but majority support even for those.

Whatever one may think of the initial or the revised documents—and I have my own reservations—the fact that complete agreement was not achieved in two weeks hardly constitutes a stark showdown with papal authority.

Douthat is equally wrong in his unqualified certainty that this supposed showdown involved a papal slide toward abandoning a Catholic teaching that is “not debatable.” Douthat’s strength is his nose for the unexamined premises of liberal culture. When it comes to Catholic thought and tradition, the available evidence suggests that he thinks within a neoconservative Catholic bubble and either dismisses or remains unaware of anything outside it.

Is it possible that the problem posed by the dynastic marriage between Henry VIII and Catherine of Aragon, a Spanish princess and the aunt of the Emperor Charles V, whose imperial forces had just sacked Rome and imprisoned the pope, is not altogether determinative of contemporary cases of failed marriages and lasting remarriages?

Might he recognize that the Eastern Orthodox Christian tradition, whose sacraments and clergy Rome accepts as valid, is no less aware of Jesus’ words about adultery but has reached different conclusions regarding remarriage and admission to communion? Is he aware of the early church’s complicated history surrounding the question of admission and readmission to communion?

Questions about divorce, remarriage, and reception of communion are not easily resolved, least of all by me. But Douthat’s assertions that the matter is simply “not debatable” is unfounded. Likewise his claim that anything besides categorically judging a second marriage adulterous would necessarily reverse rather than develop church teaching.

Should we share Douthat’s concern for the disorienting effect that any substantial change will have on “orthodox adherents”?  Absolutely, even if we reject the self-aggrandizing appropriation of the term “orthodox.”

But we should not let go unchallenged Douthat’s stunning claim that this probably “small minority” have been those doing “the most to keep the church vital.” How does he know that? In my experience the pews are filled, the catechetics and RCIA sessions are led, the schools are staffed, the parish and diocesan charities are carried out, the funds are provided, and the liturgy is celebrated by vast numbers who are not aligned with Douthat’s nefarious liberals or seculars but who would far more likely welcome than recoil at the changes in attitude and practice that Douthat describes as “betrayal.” He might even be surprised to find a good percentage of his imagined “orthodox minority” among those vast numbers.  But I don’t really know that. I know only that we should be modest in declaring who does “the most” to keep Catholicism vital.

Unity is a precious gift of the church. Like Douthat, I hope Pope Francis—and all of us—find ways to deepen it while hewing to a mission that has always been subject to different interpretations and advanced in contrasting ways. This responsibility weighs no less heavily on those who consider themselves the defenders of doctrinal constancy than on those who argue for legitimate development. If “calling doctrine into question” can precipitate “a crisis,” so can preemptively or prematurely labeling arguable proposals as “calling doctrine into question.”

I am not sure what Douthat is suggesting in his closing paragraph. If it is merely that popes can make errors and that the whole church should mobilize its thinking and praying to prevent—or correct—them, I am in complete agreement. Of course, conservative Catholics “have a role to play,” as he writes. But should that role include subtle threats of schism? I hope that is not what Douthat is proposing in his closing evocation of a church that “resists” the pope.

The Supremes Again, Now a Proposal