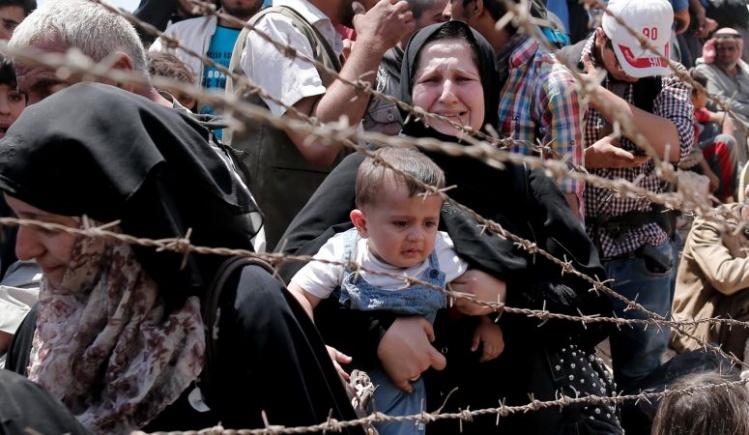 One prominent Catholic commentator has lauded the new House Speaker Paul Ryan (R-Wis.) for his “statesman’s commitment to the principles of Catholic social doctrine.” It’s a debatable assertion, to say the least, much of it resting on Ryan’s strong anti-abortion convictions while ignoring the congressman’s more cramped views on issues of social justice and economic fairness. Of course, when it comes to how Catholic social doctrine should be applied to economic arrangements or to the proper role of government, there is plenty of room for debate. There is rather less room for honest disagreement regarding our responsibilities toward refugees fleeing persecution or ethnic cleansing. Catholic teaching has long emphasized the obligation of nations as well as individuals to help the stranger in need. At this time of year especially, we are reminded that the Christian story begins with a mother and father fleeing their homeland to protect their infant son from a murderous tyrant.

One would expect Ryan, as someone committed to the principles of Catholic social doctrine, to understand the imperative of sheltering the homeless and to rise above partisan politics or xenophobic panic to do so. That, however, has not been Ryan’s response to the plight of Syrian refugees trying to enter the United States. In the wake of the ISIS atrocities in Paris, and the possibility that one of the attackers might have made his way to France among the throngs of Syrian refugees, many Americans understandably fear that similar terrorist attacks are possible here. Several Republican presidential candidates have tried to exploit that fear by denouncing the Obama administration’s plan to admit ten thousand Syrian refugees over the next few years. (Gov. Chris Christie, Sen. Ted Cruz, and Dr. Ben Carson are among the most egregious offenders. Donald Trump’s fulminations are too absurd to be taken seriously—right?) For his part, Ryan rushed a bill through the House that would all but prevent the United States from accepting any Syrian refugees. It would, for example, require the directors of the F.B.I. and national intelligence agencies, as well as the secretary of Homeland Security, to certify that each applicant posed no threat. In short, the legislation is not designed to improve the screening process but to be bureaucratically unworkable. Calling the effort to shut out such refugees a “betrayal of our values,” President Obama has promised to veto the bill if it reaches his desk.

The House’s farcically named American Security Against Foreign Enemies (SAFE) Act is thought to be a big political “win” for Republicans, but it does little more than pander to fear and ignorance. Since the Syrian civil war began, the United States has admitted only about two thousand Syrians—a shameful record given the extraordinary relief efforts of so many other nations. Jordan, Lebanon, Turkey, and now several European countries, have taken in millions.

No one is suggesting that the United States let down its guard. The safeguards already in place are formidable, as they should be. The rigorous screening of refugees, involving the FBI, the Department of Homeland Security, and the State Department, usually takes up to two years. Half of those admitted have been children, while a quarter are over the age of sixty. These desperate people do not present a threat to national security. Given that the United States plunged the entire region into chaos by invading Iraq in 2003, granting sanctuary to some of its most vulnerable is a matter of common decency. Indeed, a more morally serious response, one called for by a group of Democratic senators early this year, would be to admit something like sixty-five thousand Syrians. Not only is that the right thing to do, but it would help reassure our European allies that the United States is committed to sharing the burden of an influx of refugees that could be too large for Europe alone to absorb.

Is some risk involved? Might ISIS or another terrorist group try to plant an operative among those fleeing persecution? Certainly. Can that risk be managed? All the evidence suggests that the risk has been managed exceptionally well, and will continue to be. There is, in fact, a much greater danger that terrorists will enter the United States posing as students or tourists than that they will go through the arduous process of acquiring refugee status.

Those demanding that Syrian refugees be kept out insist there can be no prudential trade-offs, no balancing of risks no matter how small, against the good of offering refuge to thousands of innocents. “We should not bring Syrian refugees into this country unless we can be 100 percent confident that they are not here to do us harm,” Ryan insists. No such absolute guarantees exist, and to demand them is simply to close the door on all asylum seekers. That is neither statesman-like nor Christian.